I finished my last final for the fall 2011 semester on December 19. While I was studying over finals week, I also took notice of the studying patterns of my fellow classmates and myself. To carry out that goal, I looked at the study habits of students in the libraries. Williams College has two main libraries, Sawyer and Schow, the former being primarily for the humanities and the latter being primarily for the sciences. Clearly, those libraries were going to be packed by nervous students trying to get that A. But was I among those in the library?

During the two weeks or so that were dedicated to studying and taking finals, I don’t think I set foot once in those two main libraries.

Actually, I lied. I did go and enter Sawyer library just to print a document. But while I was doing that, I noticed students sitting down on the main tables on the first floor of Sawyer. They had the necessary books and materials to study with, but they were also with other students or checking out their phones. (Most likely, they were texting.)

There’s the problem. I asked myself: Why would these people who are trying to study for final exams or write lengthy final papers study with others on one of the main tables close to the entrance of Sawyer? This no doubt leads to friends entering the library, noticing those people immediately, and saying hello. Thus, these people “studying” face an endless stream of distractions. It didn’t help that there happened to be a rowdy game of Quidditch.

While it was no doubt thrilling to see that happen, especially from the perspective of someone like me who wasn’t distracted by the event, I can’t help but wonder if anyone was in the library and regretted it. Unless you can somehow get an isolated spot in the library – which is actually pretty tough in both of Williams’ main libraries – I’d recommend studying elsewhere. It’s one of the small things that can really ameliorate an academic performance. Obviously, there will be some exceptions, such as if you’ve got to work in group for some reason. But the vast majority of study time should really be done in isolation. And preferably, with the phone off.

A picture of the main tables of Schow library, from the Williams College website. I have avoided studying in this area for months, despite its attractive architecture. 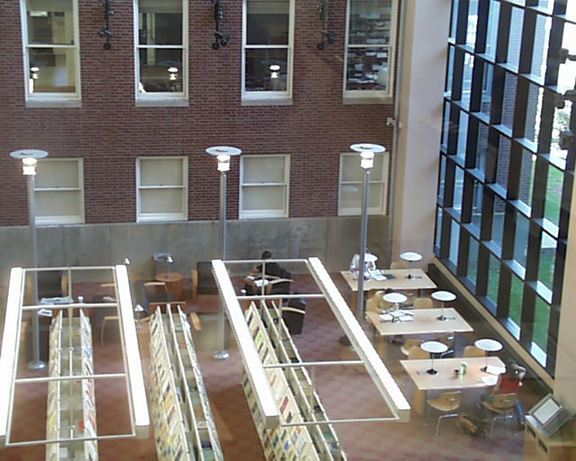