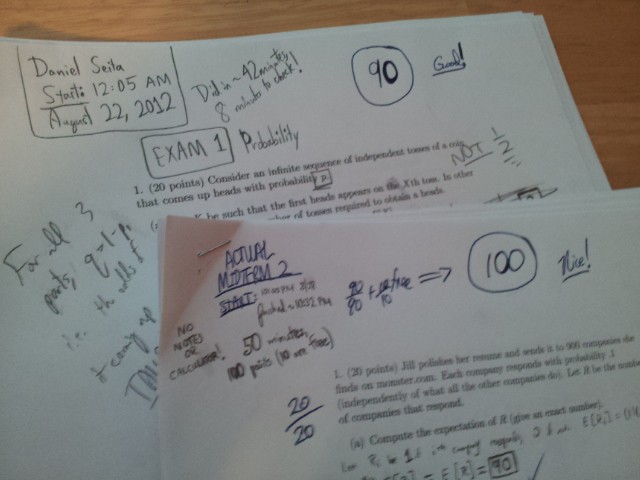 My summer job ended on July 28, 2012, and I was back home with about three or four weeks to go until the start of my junior year at Williams. I wanted to put whatever time I had to good use, and one way I thought of doing so was to prepare for my probability course this fall. Of the four courses I’m taking in the fall 2012 semester, probability is the easiest to prepare for since my professor gave out lecture notes in the middle of the summer to students (like me) who wanted to prepare well in advance.

And even better, I was able to take advantage of the wonderful repository of information on MIT’s Open Courseware. There’s a mathematics course at MIT called Probability and Random Variables, or 18.440, with a full set of lecture notes and exams with solutions.

The syllabus for my probability class closely matched what was covered in 18.440, so I wanted to challenge myself and see if I could pass the two midterms and final (using the same constraints as actual MIT students) for that course before setting foot in my actual probability class. It’s a miniature version of Scott Young’s MIT Challenge. For obvious reasons, I don’t have the time nor desire to take a full curriculum of MIT classes.

But I thought investing in understanding 18.440 would pay dividends later.

I started my personal challenge on August 13 and took the first and second midterms on the 22nd and 28th, respectively. I scored a 90 on the first midterm, and a 100 on the second. At that point, there were just seven lectures left (out of thirty or so) before the final exam, but I could tell that most of the information beyond the second midterm would not be included in my real probability class. With other unfinished business this summer, I opted to skip the final. It turned out to be a wise decision; their practice final (they didn’t have an actual one) was almost an exact recitation of the lecture slides, with half of their answer key consisting of “look at the slides for lecture X.” I doubt it would be an effective measure of how well I retained the material. I still reviewed it, but I didn’t take it under timed conditions as I did with the two midterms.

Right now, I consider myself done with my probability review, and am looking forward to finally taking an actual probability class in about a week.