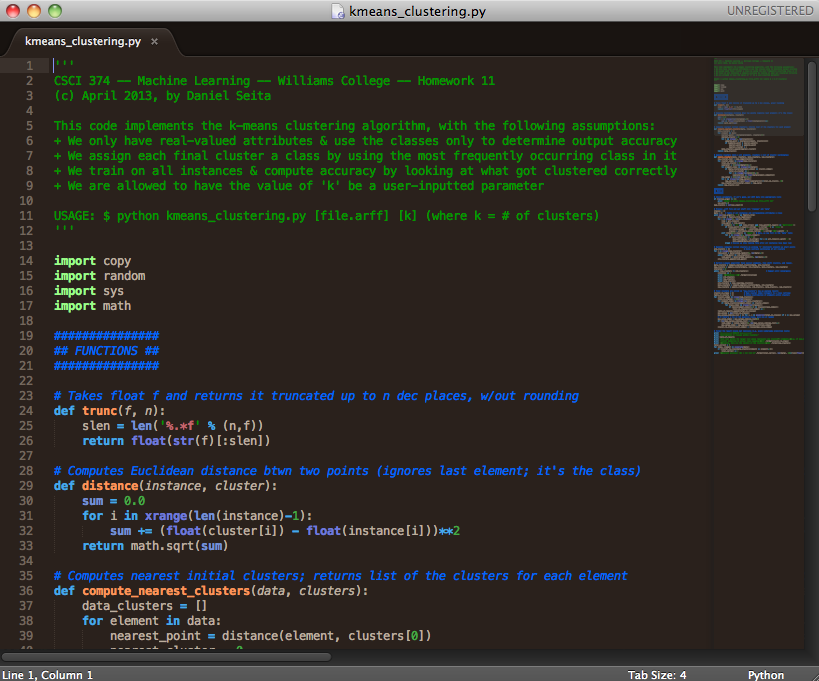 All right, let’s give this a shot.

This summer, I’ll be experimenting with the Sublime Text text editor. I remember being impressed by its visual appeal after seeing a classmate use it — so why not try it for myself? The above image demonstrates Sublime Text with my implementation of the k-means clustering algorithm, written using the Python programming language. To switch programming languages, all one has to do is click on the bottom right corner (where it says “Python” in the above image) and there will be about thirty options for languages, including C++ and Java but also some lesser known ones such as Erlang and Lua. This way, we get the indentation and coloring to look good. Better colors = better programming.

What about emacs, though? Possibly the biggest difference between Sublime Text and emacs, which for the past year was my editor of choice, is that Sublime Text generally requires fewer “special commands” to program and thus has a shorter learning curve. Emacs also seems to encourage the programmer to have his or her hands on the keyboard at the same spot all the time, since the manual recommends not using the arrow keys but using Ctrl+N, Ctrl+P, and other command to move the cursor over. This is because our hands won’t leave their natural position, unlike in the case when we use arrow keys.

I don’t think I’m at the point in my career where I need to really worry about this. If it’s really necessary for some situation, ideally I’ll know it in advance and can spend the months (years?) prior to it prepping by using emacs nonstop.

Now, if Sublime Text starts requiring us to pay for continued use, then I’m likely gone. Hopefully that won’t happen.