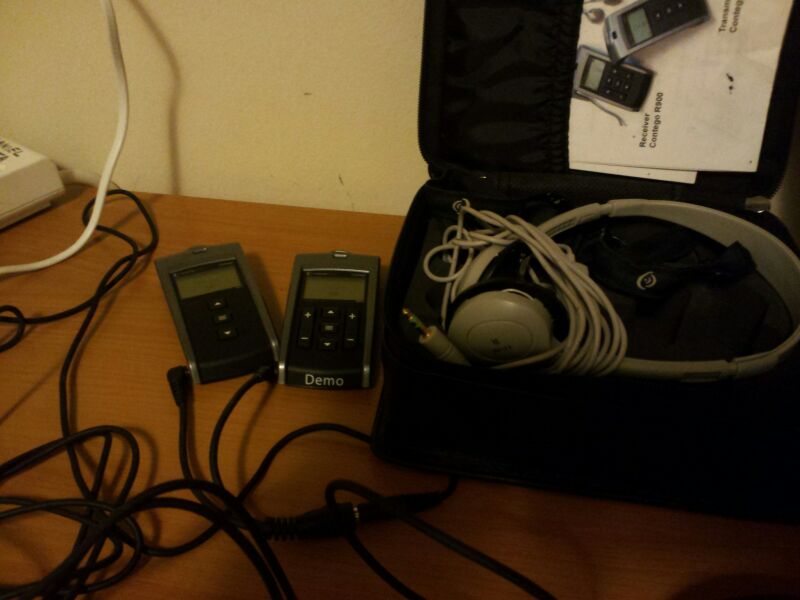 I’m almost done with my first week at The University of North Carolina at Greensboro’s algorithms and combinatorics REU, and I’ve also had my first experience with the Contego R900 FM system.

For some reason, I’m particularly prone to worrying about technical difficulties, so I’m happy to report that the Contego R900 certainly works. It’s been particularly useful this past week given that my research advisor is relatively soft-spoken and has a high-pitched accent. As part of the REU schedule, she gave — in the span of two days — a total of seven research talks, each of which was about 45 minutes long. Fortunately, the FM system made it so that strictly understanding what she was saying was generally not the limiting factor in how much material I could comprehend from the presentations.

As you can see in the picture I posted above, the Contego R900 system includes headphones and an inductive T-Coil loop. Until the time of this writing, I actually thought that the loop was just a lanyard, so I used headphones to connect to the receiver. In general, I don’t like headphones, because to me they aren’t aesthetically pleasing and it’s hard to align them with hearing aids to allow maximum benefit. They can also cause some feedback, that classic “ringing” noise that every hearing-aid user knows. The man at Greensboro who provided me with the materials actually said that most people who use this system don’t even wear it with hearing aids. Later that day, I ran a quick test with a YouTube video on my laptop and using the FM system (which I placed on the laptop) without hearing aids. I had to churn up the receiver’s volume to its maximum level in order to obtain a reasonable level of hearing, so using the system without hearing aids was not an option for me.

I ended up putting the headphones just above the top of my hearing aids. Fortunately, they remained in place and caused no ringing.

Nonetheless, I’m going to switch to using the T-Coil loop in the future. I again ran some tests using my laptop, and it’s pretty weird how it works. The loop is made so that a person essentially has to be wearing it as if it were a lanyard in order to benefit from increased transmission.

I’m looking forward to using the Contego R900 in the remaining seven weeks of the REU. Later in the summer, I’ll probably write up a long comparison between the Contego R900 and the Phonak Smartlink FM systems.