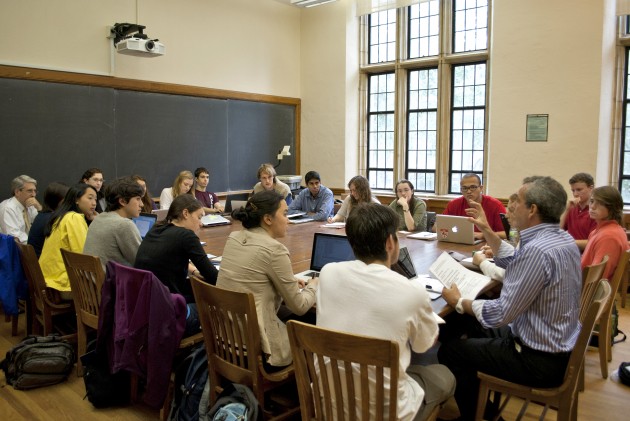 I like the concept of seminar courses. These are typically small classes that feature active discussion and debate each session. At Williams, these courses — where enrollment is limited to 19 students to comply with U.S. News & World Report standards for “small class sizes” — make up a substantial portion of the humanities curriculum. While there are certainly many wonderful things I can say about seminars, one of my personal gripes is that they pose additional burdens to deaf students.

Here’s the problem: if students are interested and motivated by the course material, they’ll be active participants. That means class discussion will be moving at a quick pace from one person to another as people raise their hands immediately after others finish talking.

But as a deaf person who cannot really understand what my classmates say until I get the feedback from a sign language interpreter, there’s an added delay until I can get the same information. Inevitably, once I can understand what my classmates have said, another one immediately jumps into the discussion by saying something similar to: “building off of [his/her] previous point, I think that […]”.

The end result is that I’ve often felt lost in some of these discussions. Many times, I’ve wanted to say something, only to see someone else claim credit for that concept by being quicker than me at raising his or her hand. It’s not a problem that’s easily solved. There’s always going to be some sort of delay with sign language, CART, and other accommodations, but it can pose difficulty to deaf students. Since seminars tend to incorporate class participation as a large fraction of students’ grades, that factor can be a deterrent to deaf people for taking these courses.

As I think about seminar courses, I’m reminded of a particularly painful high school AP US History class. The class was divided into groups of three, and we had to debate over a topic that I’ve long since forgotten. (Each group had to defend a unique perspective.) But the main thing that I remember was that the teacher required each student to make three substantial comments in the debate in order for him or her to receive full credit.

The debate ended up being chaotic, with students shouting out their comments all over the place, often interrupting each other without restrain. (My teacher actually had to stop the class once, so we could relax and start fresh.) Predictably, I was completely lost among the commotion and didn’t see any way I could participate without sounding awkward. Eventually, towards the end of the debate, I finally made my sole comment of the day. And that was only because one of my group members (out of sympathy?) actually told me what to say! He mentioned his thoughts to me, raised his hand and then let me talk once the focus was on our group. In other words, I was just echoing his idea.

Fortunately, my teacher recognized the challenges I faced and didn’t penalize me for failing to participate in that embarrassing debate.

So how should a deaf person approach seminars? I’m not interested in asking professors to lower their grading standards (I’d be offended otherwise), though it might be wise to mention to them the delay in reception due to ASL or other accommodations, just so they’re aware. Another thing one could ask is that the professor slow down the pace of discussion. That is, if one student finishes talking, ask the professor to wait a few extra seconds before picking the next person to talk.

With respect to how class discussion proceeds, my best advice is that one should aim to be the first to comment on a class topic. That means when the professor reviews something based on homework readings and then says: “Any thoughts on this?” to the class, that’s the best time for someone like me to participate.

This situation typically happens at the start of class, so there isn’t a need to make your contribution to the class debate relate to previous comments (a huge plus!). Furthermore, professors often articulate better than students, making it easier for me to rely more on my own hearing. Finally, while this might be entirely anecdotal evidence, I’ve observed that professors are often more willing to wait a longer time when they open up a discussion than when they’re in the middle of one.