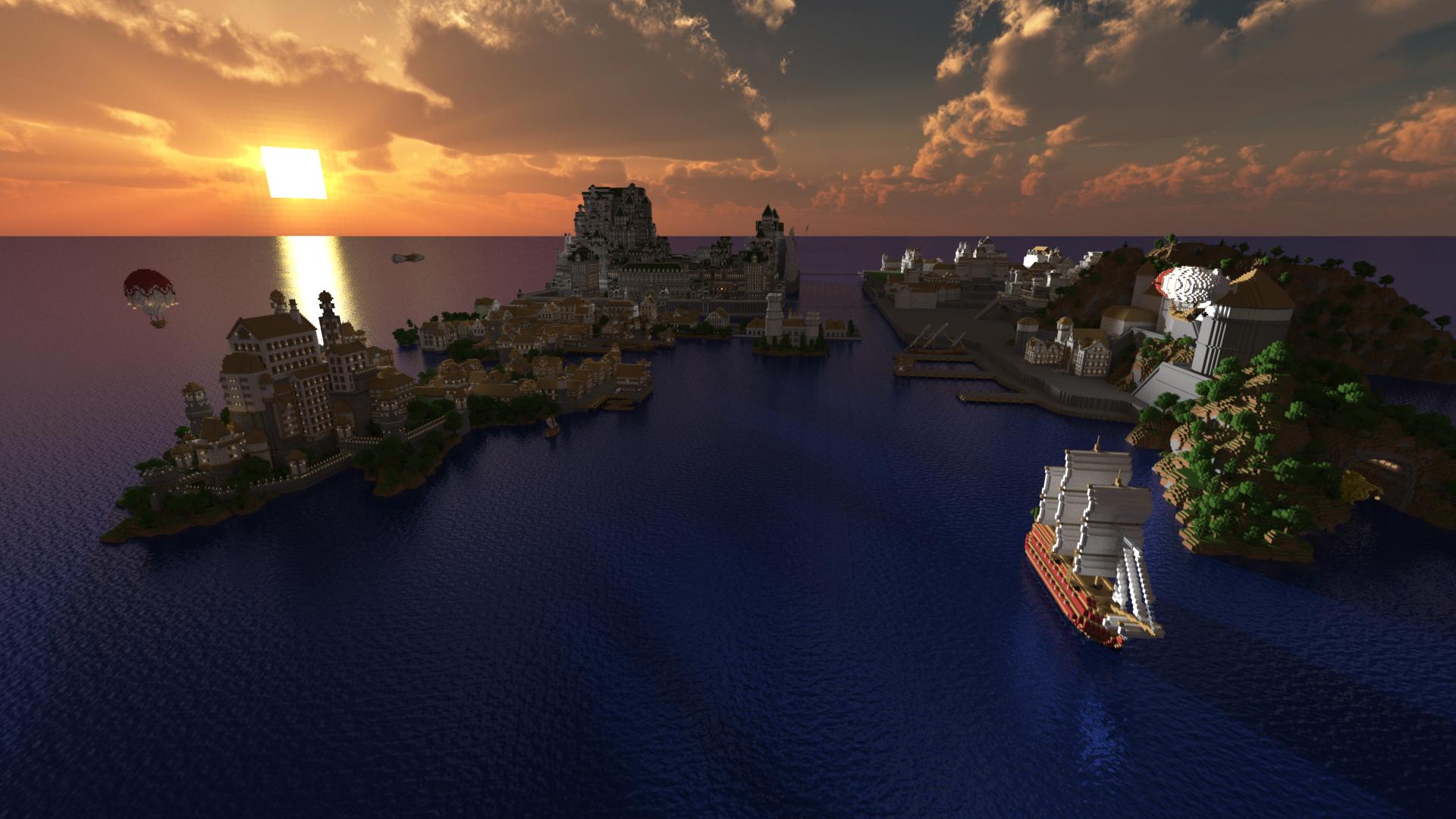 This discussion will be a continuation of my last post, What if 300 Deaf People were Isolated on an Island? I will focus on the usage of American Sign Language versus English in the hypothetical scenario that a group of deaf people migrate to an island and are allowed to form their own small country.

To be specific, here is what I have in mind.

The main question I want to consider pertains to the use of ASL versus English. In other words …

In the long run, which language will become the “official, spoken language” of this island?

There are two candidates: ASL or English. By “spoken language,” I’m referring to what people will use to communicate with each other. Yes, English will be the language used for writing, but I’m more interested in conversations. We could take the “easy way” out and say that both are official, but let’s assume that the United Nations or some futuristic, worldwide diplomacy venue mandates exactly one spoken language registered for each country. I suspect that, eventually, English will reign supreme in this regard.

Though the island originally starts with a population that consists exclusively of deaf people, the next generation will not share that characteristic. In fact, the majority of the children born to parents among the 300 starting inhabitants will probably be hearing. Deafness is very uncommon among newborn babies, and even if both parents are deaf, their children are still likely to have normal hearing.

This trend continues generation after generation, so in the long run, the island’s population will approach a proportion of deaf people similar to the one that exists in today’s world.

So what happens? The island becomes a “hearing world,” where the official language is spoken English. There are sure to be some people who know ASL, of course, because there will still be deaf people around. But English becomes the conventional, spoken language because hearing people will constitute the majority of the population, and they will be the ones taking up management positions, political offices, and so on.

But I still have a nagging suspicion that I’m missing something. I wonder …

Would there be any circumstance in which ASL could actually be the official spoken language in the long run?

There are obvious challenges. First, we’re talking about a language that the vast majority of the population won’t need to use. Hearing people may even view it as an inconvenience when communicating with each other; why put the effort in moving hands when you can expend less while talking and still achieve the same objectives? Second, is it possible to have an official spoken language that can’t really be used for written documents?

The island scenario does have one major aspect that doesn’t totally kill the idea of ASL being the spoken language: it starts with 300 deaf people. If ASL were to be the spoken language of this island or future country, then I suspect it will all rest on the influence of those 300 people. They will certainly teach their children ASL, regardless of them being hearing or deaf. Thus, the second generation will use ASL.

The question is whether the all-hearing families with parents from that second generation will stress the importance of ASL to their hearing children. Even if they do, I worry that the use of ASL would gradually weaken from generation to generation among hearing families. In order for such a concept to be passed down and not whither away, it would probably need to take on as much importance as a religion or a true, cultural activity.

So there is an outside chance that ASL could be the spoken language. Still, I suspect we would need additional strong assumptions for that situation to occur. The one that most easily supports ASL being the spoken language would be if the incidence of deafness among babies skyrockets.

Anyway, that is one scenario. What are other similar ones that come in mind? I encourage you to think about the various possibilities and their resulting, long-run equilibrium states. Try tweaking some of the assumptions and see what you get.

Somehow, I made it to 100 posts on Seita’s Place. (This is post #100.) So in honor of this “special event,” let’s look at some additional statistics about my blog.

According to my WordPress Dashboard, I now get roughly 25 views a day (from about 15 to 20 visitors), which is up from the 0 to 5 views/visitors that I was getting when the blog first began. Excellent! Seita’s Place’s best day was on Monday, December 30, 2013, when it got 98 views from 19 visitors. All time, there are 9,052 views and 133 comments. There are currently 34 followers.

My blog entry that has the most comments is, by far, ASL Guidelines with 13 comments, though a lot of the comments on Seita’s Place consist of “pingbacks,” which occur when entries link to other entries, which can inflate the comment count. There are four entries that have five comments, and an additional four that have four comments.

How do the blog posts rate in terms of popularity? That’s pretty easy to gauge, as WordPress keeps track of views for each entry. Here’s an image showing the top of the chart: 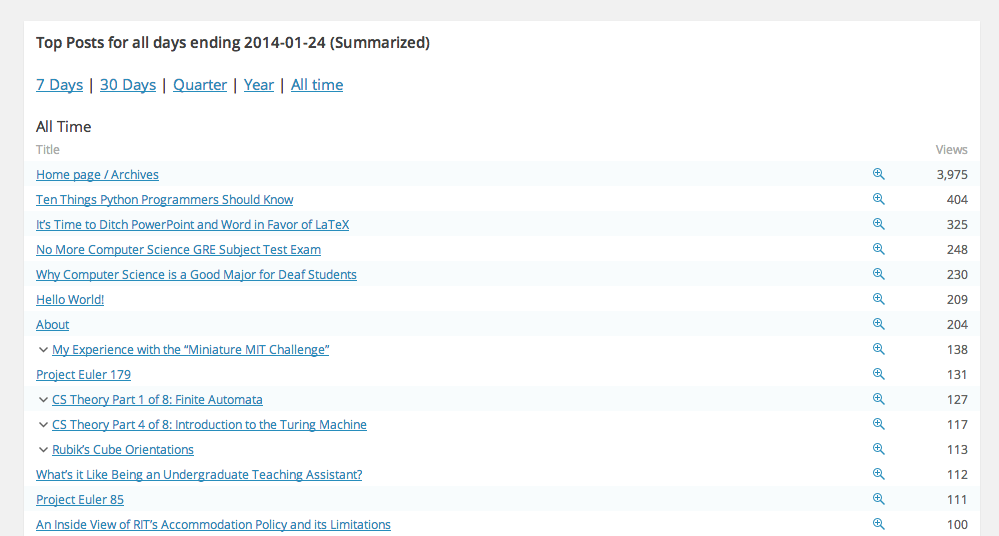 So the most popular post is by far Ten Things Python Programmers Should Know, with 404 views. The least popular is On the Hardness of Nintendo Games, with a measly two views.

I can also tell that there are three primary ways that people manage to find Seita’s Place. (1) They search my name, (2) they find the link to it in my Facebook profile, and (3) they search about Theory of Computation or Python.

Finally, where are my viewers coming from? Since February 2012, it seems like the majority are (by far) from the United States. The next country on the list is India, followed by the United Kingdom. 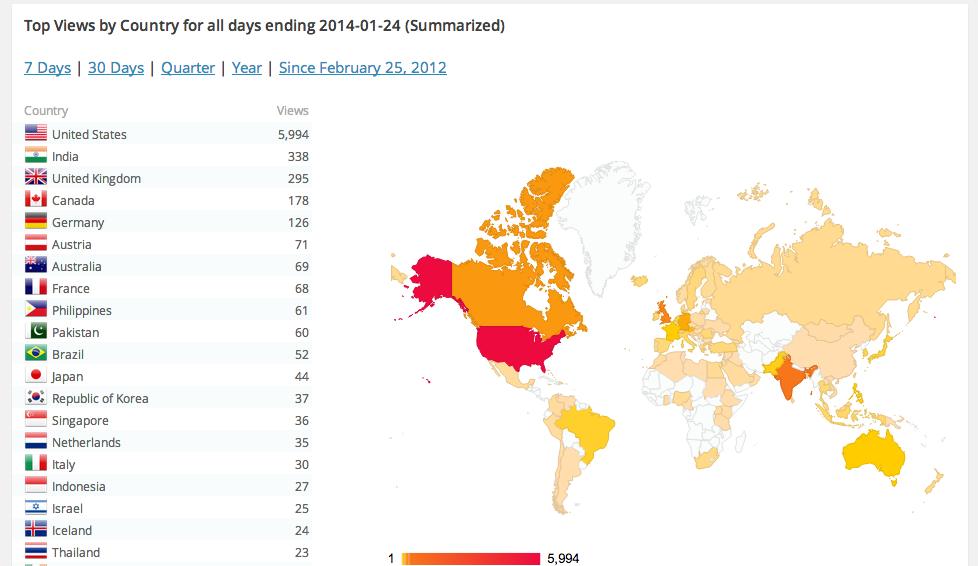