I departed from San Francisco and landed in Seattle near midnight. Fortunately, Washington’s visit days didn’t start until the following day (Tuesday). They were the only school I visited that restricted their visit days to be two days, probably because they know they have lots of cross-admits with Berkeley. I rode a shuttle that brought me back to the Silver Cloud Inn near the university’s campus. I did request to live with graduate students, but I was told that Washington had over ninety students show up to visit days, and there were sadly not enough hosts to accommodate all of us. 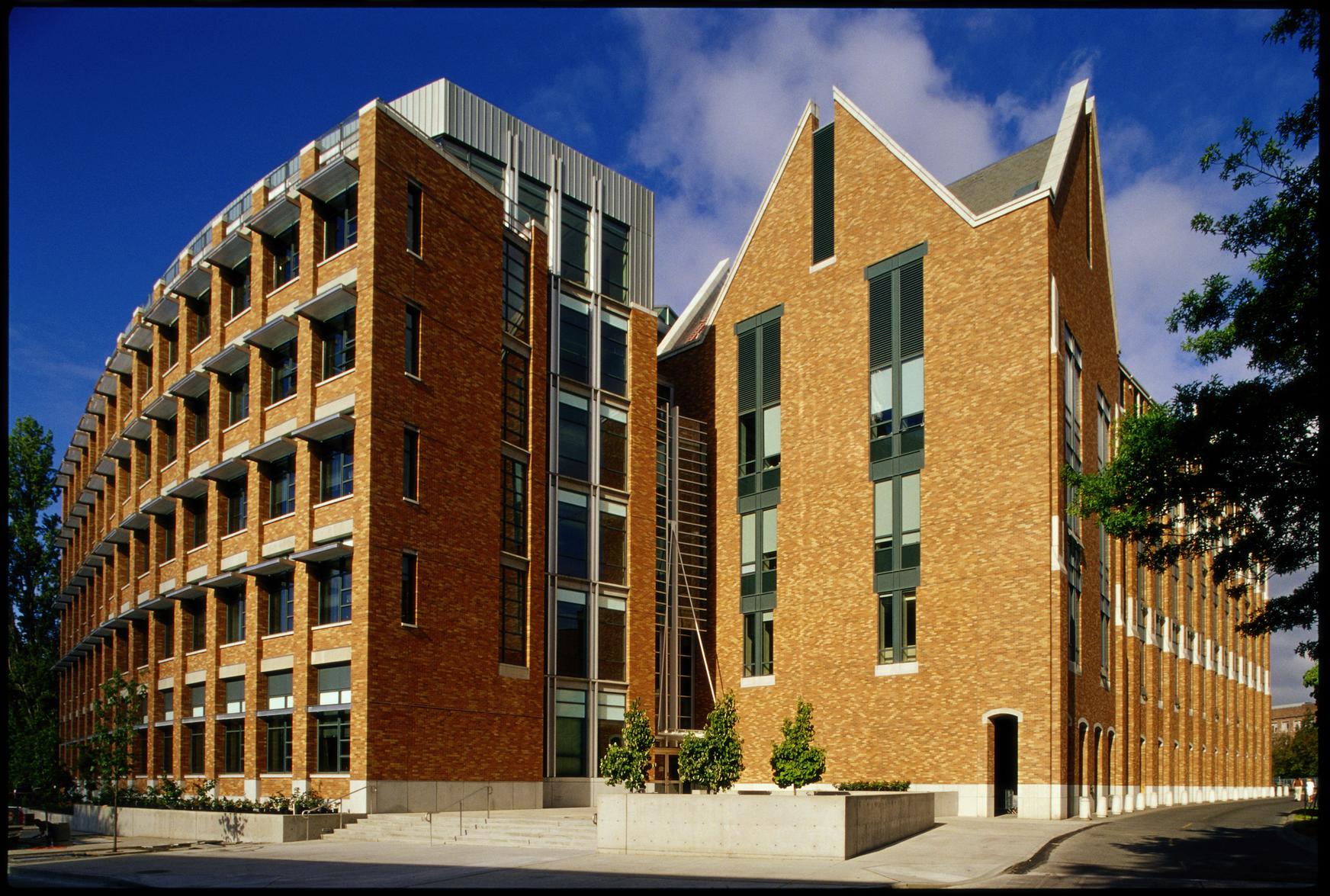 The following morning, another shuttle took a group of students from the hotel to the Paul G. Allen Center. It was quite nostalgic coming back to the same building that I spent a lot of time in while at the 2011 Summer Academy, and I still remembered my way around it.

Unlike Berkeley, Washington’s schedule started super-early, with breakfast at 8:00 AM. Then the department chair gave us a slide show welcoming us to Washington and gave us reasons why we should attend the Ph.D. program. One of them was that Washington would be substantially expanding the size of their faculty, which increases the pool of potential advisors for incoming students. I remember back in 2012 when Washington shocked the computer science world by hiring seven faculty members. They followed that up with four new hires in 2013. Hiring eleven in the span of two years is is rare enough, but Washington isn’t done yet! The department will be hiring six faculty members in 2014 and then six more in 2015, for a grand total of twenty-three hires in four years! Indeed, the department is going to look very different soon. I also found out from several reliable sources that one of the new 2014 hires is a machine learning expert. The list of new faculty will probably be announced sometime in late May or early June.

After the chair’s presentation, four faculty members gave quick technical talks to highlight the breadth of research in the department. Then there was, as usual, a graduate student panel. According to the current students, the worst thing about being at Washington was (unsurprisingly) the cold weather. I don’t think there was anything super-surprising I learned from the panel.

Later that day, we had faculty and laboratory meetings. I went to the databases and machine learning meetings, which were each an hour long and involved the usual series of faculty talks. Washington’s style is to have grad students groups in the center of the building (usually) with professors on the outer side, but the Paul Allen center has a giant atrium inside of it so it doesn’t feel too isolating. To clarify, each floor has some conference rooms in the center of the building, and the shared offices for graduate students are shown on the right side in the following image: 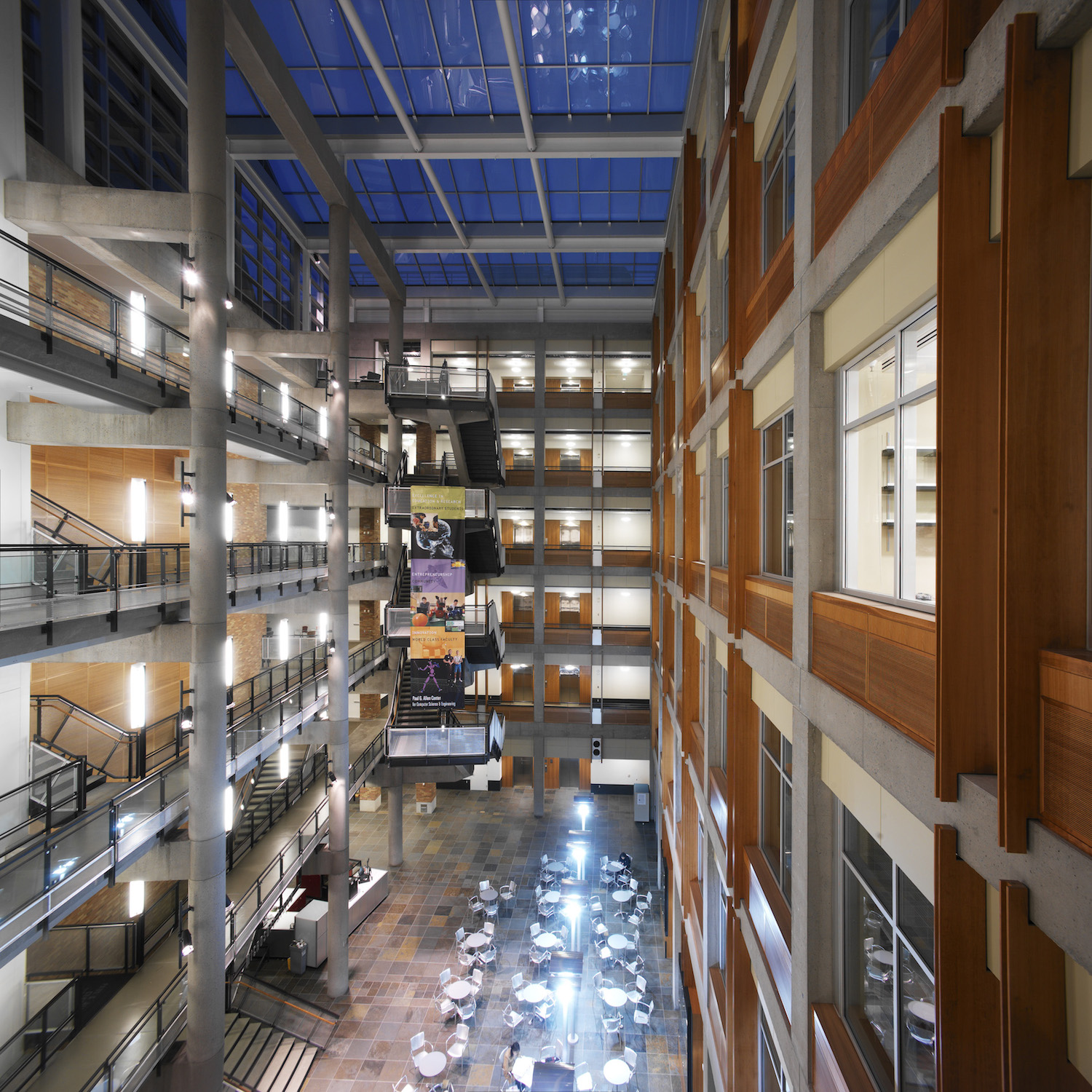 The machine learning lab was packed with faculty and admits, which forced many people to stand due to the lack of chairs. It was clear to me that machine learning is one of Washington’s strengths. When I had lunch earlier, a current graduate student told me he estimated that more than half of the students were working on either machine learning or HCI.

Quite surprisingly, I was also scheduled to have one-on-one meetings with *graduate students. *These meetings were not a part of UT Austin, Cornell, or Berkeley’s visit days, and I consider that a plus for Washington. (I sent in requests to meet certain faculty members, but not graduate students.) All one-on-one meetings, by the way, lasted 20-30 minutes, which seems to be standard among the schools I visited.

At 5:30 PM, there was a reception in the Allen Atrium with beer, wine, soda, veggies, and cheese/crackers. It was a bit on the noisy side, but I had some worthwhile conversations. (The wine was also good.) Then the admits, current students, and faculty walked as a group to a nearby building where we all had a formal dinner. The food was great.

I had a few more meetings scheduled on Wednesday and also visited the HCI laboratory, but the highlights of the day took place after lunch, where research groups hosted different activities. I went on the AI/ML/Robotics boat tour. Sadly, it was cloudy, so the view wasn’t that great, but it was nice to be outside for a while.

After eating a quick dinner on “The Ave,” I found some time to catch up on email, turn in some late homework, etc., then I took the shuttle back to Seattle. I flew back Wednesday night (in Seattle time) and arrived on the east coast at roughly 9:00 AM. I barely made it back in time for my Distributed Systems lecture on Thursday. It was time for my life to get back to normal, but I admit that traveling was fun.

I also need to decide on which graduate school to attend! That’s what I’ve been doing and still will be doing for another few weeks.