This post marks the beginning of a new era for my blog. For almost four years (!), which saw 151 posts published (this post is #152), Seita’s Place was hosted by Wordpress.com. Over the past few months, though, I’ve realized that this isn’t quite what I want for the long run. I have now made the decision to switch the hosting platform to Jekyll.

Many people others (e.g., Vito Botta and Tomomi Imura) have provided reasons why they migrated from Wordpress to Jekyll, so you can read their posts to get additional perspectives.

Jekyll, which was created by GitHub founder Tom Preston-Werner1, offers a splendid blogging platform with minimalism and simplicity in mind. It allows users like me to write posts in plain text files using Markdown syntax. These are all stored in a _posts file in the overall blog directory. To actually get the site to appear online, I can host it on my GitHub account; here is the GitHub repository for this site2. By default, such sites are set to have a URL at username.github.io, which for me would be danieltakeshi.github.io. That I can use GitHub to back up my blog was a huge factor in my decision to switch over to Jekyll for my blog.

There’s definitely a learning curve to using Jekyll (and Markdown), so I wouldn’t recommend it for those who don’t have much experience with command-line shenanigans. But for me, I think it will be just right, and I’m happy that I switched.

How Did I Migrate?

Oh boy. The migration process did not go as planned. I was hoping to get that done in about three hours, but it took me much longer than that, and the process spanned about four days (and it’s still not done, for reasons I will explain later). Fortunately, since the spring semester is over, there is no better time for me to work on this stuff.

Here’s a high-level overview of the steps:

The first step to do is one that took a surprisingly long time for me: I had to migrate from Wordpress.com to Wordpress.org. It took me a while to realize that there even was a distinction: Wordpress.com is hosted by Wordpress and they handle everything (including the price of hosting, so it’s free for us), but we don’t have as much control over the site, and the extensions they offer are absurdly overpriced. Wordpress.org, on the other hand, means we have more control over the site and can choose a domain name to get rid of that ugly “wordpress” text in the URL. Needless to say, this makes Wordpress.org extremely common among many professional bloggers and organizations.

In my case, I had been using Wordpress.com for seitad.wordpress.com, so what I had to do was go to Bluehost, pay to create a Wordpress.org site, which I named seitad.com, and then I could migrate. The migration process itself is pretty easy once you’ve got a Wordpress.org site up, so I won’t go into detail on that. The reason why I used Bluehost is because it’s a recommended Wordpress provider, and on their website there’s a menu option that you can click to create a Wordpress.org site. Unfortunately, that’s about it for my praise, because I otherwise really hate Bluehost. Did anyone else feel like Bluehost does almost nothing but shove various “upgrade feature XXX for $YZ” messages down our throats? I was even misled by their pricing situation and instead of paying $5 to “host” seitad.com for a month, I accidentally paid $71 to host that site for a year. I did notice that they had a 30-day money back guarantee, so hopefully I can hastily finish up this migration and request my money back so so I won’t have to deal with Bluehost again3.

To clarify, the only reason why I am migrating to Wordpress.org is because the next step, using a Wordpress-to-Jekyll exporter plugin, only works on Wordpress.org sites, because Wordpress.com sites don’t allow external plugins to be installed. (Remember what I said earlier about how we don’t have much control over Wordpress.com sites? Case in point!) But before we do that, there’s a critical step we’ll want to do: change the permalinks for Wordpress to conform to Jekyll’s default style.

Modifying permalinks is not strictly necessary, but it will make importing comments later easy. The default Wordpress.org scheme seems like it appends a “p” followed by an integer, and then a question mark. We want to change it to match Jekyll’s default naming scheme, which is /year/month/day/title, and we can do that by modifying the “Permalinks” section in the Wordpress dashboard. 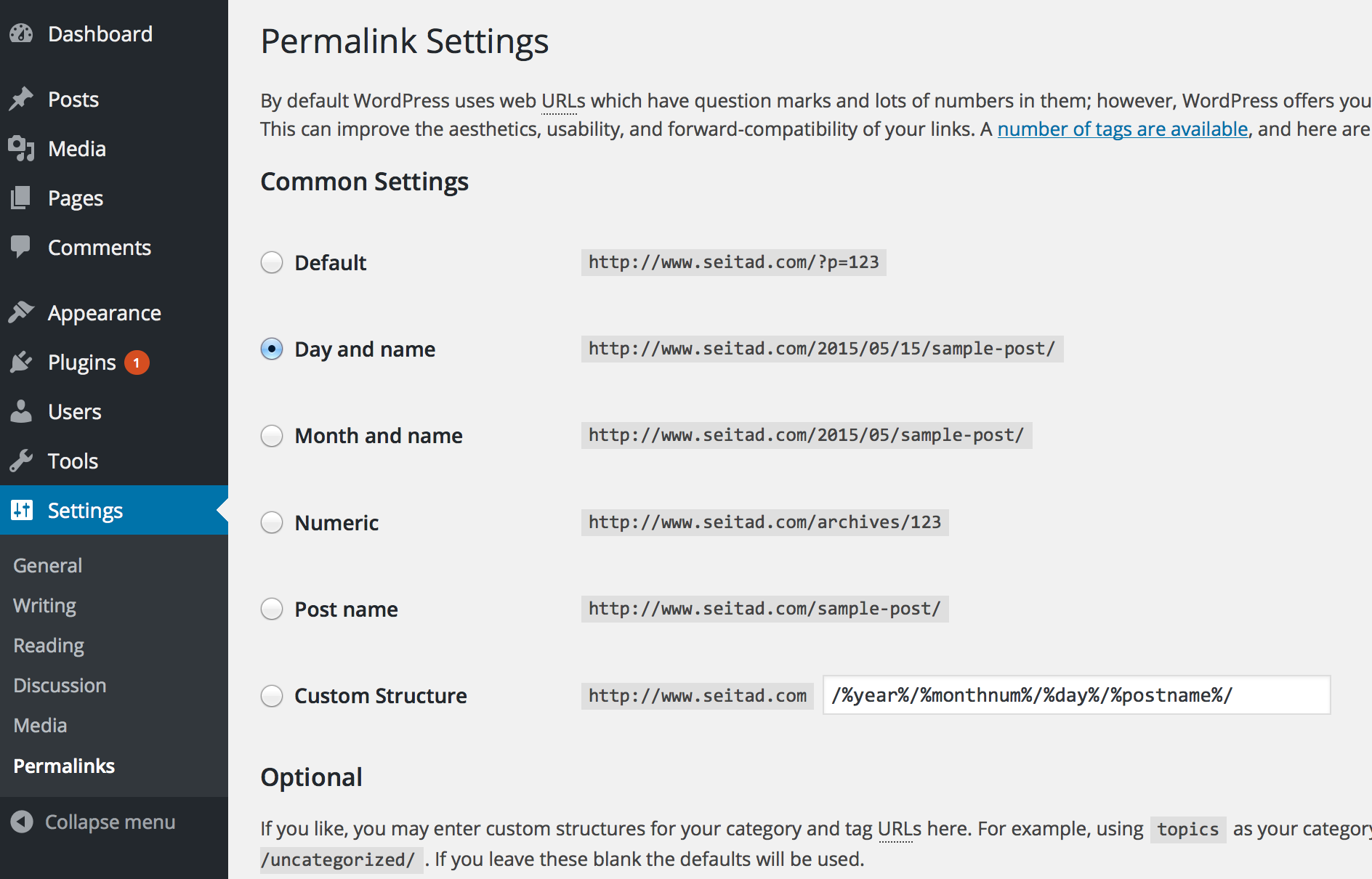 Now let’s discuss that Wordpress-to-Jekyll exporter I recently mentioned. This plugin, created by GitHub staff member Ben Balter, can be found (you guessed it) on GitHub. What you need to do is go to the “Releases” tab and download a .zip file of the code; I downloaded version 2.0.1. Then unzip it and follow the instructions that I’ve taken from the current README file:

Steps (2) and (3) shouldn’t need much explanation, but step (1) is the trickiest. The easiest way to do this is to establish what’s known as an FTP connection to the Wordpress.org server, with the “host name” field specified by the URL of the old site (in my case, seitad.com). What I did was download FileZilla, a free FTP provider, and used its graphical user interface to connect to my Wordpress.org site.

Note that to connect to the site, one does not generally use his or her Wordpress.org’s login, but instead, one needs to use the login information from Bluehost4! Once I got over my initial confusion, I was able to “drag and drop” the wordpress-to-jekyll exporter plugin to the Wordpress site. You can see in the above image (of Filezilla) that I have the plugin in the correct directory on the remote site. Executing steps (2) and (3) should then result in a jekyll-export.zip file that contains the converted HTML-to-Markdown information about blog entries, as well as other metadata such as the categories, tags, etc.

All right, now that we have our zip file, it’s time to create a Jekyll directory with the jekyll new danieltakeshi.github.io command, where danieltakeshi should be replaced with whatever GitHub username you have. Then take that jekyll-export.zip file and unzip it in this directory. This should mean that all your old Wordpress posts are now in the _posts directory, and that they are converted to Markdown, and that they contain some metadata. The importer will ask if you want to override the default _config.yml file; I chose to decline that option, so _config.yml was still set to be what jekyll new ... created for me.

The official Jekyll documentation contains a tool that you can use to convert from Wordpress (or Wordpress.com) to Jekyll. The problem with the Wordpress.com tool is that the original Wordpress.com posts are not converted to Markdown, but instead to plain HTML. Jekyll can handle HTML files, but to really get it to look good, you need to use Markdown. I tried using the Wordpress.org (not Wordpress.com) tool on the Jekyll docs, but I couldn’t get it to work due to missing some Ruby libraries that later caused a series of dependency headaches. Ugh. I think the simplicity and how the posts actually get converted to Markdown automatically are the two reasons why Ben’s external jekyll plugin is so popular among migrators.

At this point, it makes sense to try and commit everything to GitHub to see if the GitHub pages will look good. The way that the username.github.io site works is that it gets automatically refreshed each time you push to the master branch. Thus, in your blog directory, assuming you’ve already initialized a git repository there, just do something like

These commands5 will update the github repository, which automatically updates username.github.io, so you can refresh the website to see your blog.

One thing you’ll notice, however, is that comments by default are not enabled. Moreover, old comments made on Wordpress.org are not present even with the use of Ben’s Wordpress-to-Jekyll tool. Why this occurs can be summarized as follows: Jekyll generates static pages, but comments are dynamic. So it is necessary to use an external system, which is where Disqus comes into play.

Unfortunately, it took me a really long time to figure out how to import comments correctly. I’ll summarize the mini-steps as follows: 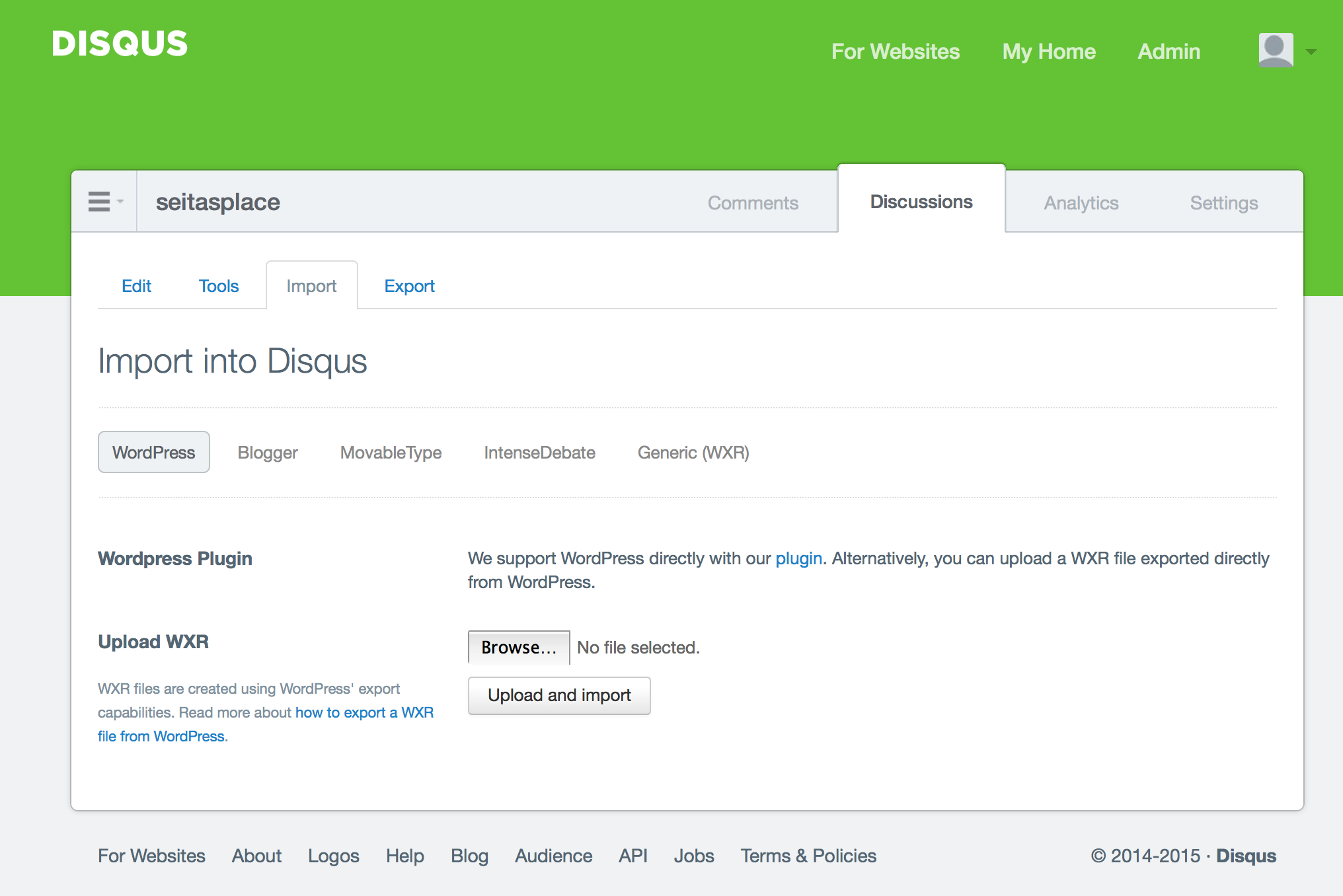 After several restarts due to some random issues with Disqus/Wordpress having problems with deleted material, I was finally able to get comments imported correctly, and they had the same names assigned to the commentators! Excellent! The traceback comments, which are created by Wordpress when one blog post links to another blog post, did not get copied over here, but I guess that’s OK with me. I mostly wanted the human comments, for obvious reasons.

Whew! ? Oh, never mind – we have to proofread each post! Since I had 151 posts from Wordpress to import, that meant I had to proofread every single one of them. Ben’s importer tool is good but not perfect, and code- or math-heavy posts are especially difficult to convert correctly. Even disregarding code and math, a common issue was that italicized text wouldn’t get parsed correctly. Sometimes the Markdown asterisks were “one space too ahead”, e.g., if the word code needs to be italicized, the Markdown syntax for that is *code*, but sometimes the importer created *code *, and that danging space can create some ugly asterisks visible in the resulting HTML.

Even after basic proofreading, there are still additional steps one needs to take in order to ensure a crisp blog. One needs to

I haven’t been able to do all these steps yet, but I’m working on it8.

Whew! The best part about the migration is that you only have to do it once. Part of the problem is that I had to rely on a motley collection of blog posts to help me out. The Jekyll documentation itself was not very helpful9.

In addition to the actual migration, there are some sensible steps that users should take to ensure that they can extract maximal utility from Jekyll. For me, I plan to

Incidentally, now that we’ve covered the migration pipeline, I thought I should make it clear how one would go about using Jekyll. To add new posts, one simply adds a file in the _posts directory that follows the convention YYYY-MM-DD-name-of-post.ext and includes the necessary front matter, which contains the title, the date, etc. Looking at the raw Markdown code of sample posts is probably the easiest way to learn.

One could update the site with each edit by adding, committing, and pushing to GitHub, but probably a better way is to update locally by running jekyll build; jekyll serve. This will create a local copy of Jekyll that one can have open in a web browser even if one doesn’t have Internet access. Each time one saves a post, the server will update, so by refreshing, we can see the edit. It won’t catch all edits — I had to push to GitHub and then update the local copy to get images to show up correctly — but it is useful enough that I thought I’d share (and suggest) it. Furthermore, if the website is public, it’s best to update/push polished versions of posts rather than works-in-progress.

Hopefully these personal notes prove useful to future Wordpress.{com,org}-to-Jekyll migrators. In the meantime, I’m going to fix up the rest of this site and prepare some new entries that accentuate some of Jekyll’s neat features.