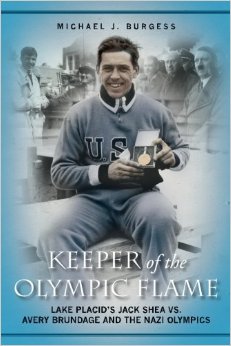 I just read Keeper of the Olympic Flame: Lake Placid’s Jack Shea vs. Avery Brundage and the Nazi Olympics. This is the story of Jack Shea, a speed-skater from Lake Placid, NY, who won two gold medals in the 1932 Winter Olympics (coincidentally, also in Lake Placid). Shea became a local hometown hero and helped to put Lake Placid on the map.

Then, a few years later, Jack Shea boycotted the 1936 Winter Olympics since they were held in Nazi Germany. Jack Shea believed – rightfully – that any regime that discriminated against Jews to the extent the Nazis did had no right to host such an event. Unfortunately, the man in charge of the decision, Avery Brundage, had the last call and decided to include Americans in the Olympics. (Due to World War II, The Winter Olympics would not be held again until 1948.) The book discusses Shea’s boycott – including the striking letter he wrote to Brundage – and then moves on to the 1980 Winter Olympics, which also was held in Lake Placid.

I enjoyed reading Keeper of the Olympic Flame to learn more about the history of the Winter Olympics and the intersection of athletics and politics.

The book also means a lot to me because Jack Shea was my great-uncle. For me, the pictures and stories within it are riveting. As I read the book, I often wondered about what life must have been like in those days, particularly for my distant relatives and ancestors.

I only met Jack Shea once, at a funeral for his sister (my great-aunt). Jack Shea died in a car accident in 2002 at the age of 91, presumably from a 36-year-old drunk motorist who escaped prosecution. This would be just weeks before his grandson, Jimmy Shea, won a gold meal in skeleton during the 2002 Salt Lake City Winter Olympics. I still remember watching Jimmy win the gold medal and showing everyone his picture of Jack Shea in his helmet. Later, I would personally meet Jimmy and other relatives in a post-Olympics celebration.

I wish I had known Jack Shea better, as he seemed like a high-character individual. I am glad that this book is here to partially make up for that.