One of the major difficulties in understanding how neural networks work is due to the backpropagation algorithm. There are endless texts and online guides on backpropagation, but most are useless. I read several explanations of backpropagation when I learned about it from 2013 to 2014, but I never felt like I really understood it until I took/TA-ed the Deep Neural Networks class at Berkeley, based on the excellent Stanford CS 231n course.

The course notes from CS 231n include a tutorial on how to compute gradients for local nodes in computational graphs, which I think is key to understanding backpropagation. However, the notes are mostly for the one-dimensional case, and their main advice for extending gradient computation to the vector or matrix case is to keep track of dimensions. That’s perfectly fine, and in fact that was how I managed to get through the second CS 231n assignment.

But this felt unsatisfying.

For some of the harder gradient computations, I had to test several different ideas before passing the gradient checker, and sometimes I wasn’t even sure why my code worked! Thus, the purpose of this post is to make sure I deeply understand how gradient computation works.

Note: I’ve had this post in draft stage for a long time. However, I just found out that the notes from CS 231n have been updated with a guide from Erik Learned-Miller on taking matrix/vector derivatives. That’s worth checking out, but fortunately, the content I provide here is mostly distinct from his material.

The Basics: Computational Graphs in One Dimension

I won’t belabor the details on one-dimensional graphs since I assume the reader has read the corresponding Stanford CS 231n guide. Another nice post is from Chris Olah’s excellent blog. For my own benefit, I reviewed derivatives on computational graphs by going through the CS 231n example with sigmoids (but with the sigmoid computation spread out among finer-grained operations). You can see my hand-written computations in the following image. Sorry, I have absolutely no skill in getting this up quickly using tikz, Inkscape, or other visualization tactics/software. Feel free to right-click and open the image in a new tab. Warning: it’s big. (But I have to say, the iPhone7 plus makes really nice images. I remember the good old days when we had to take our cameras to CVS to get them developed…) 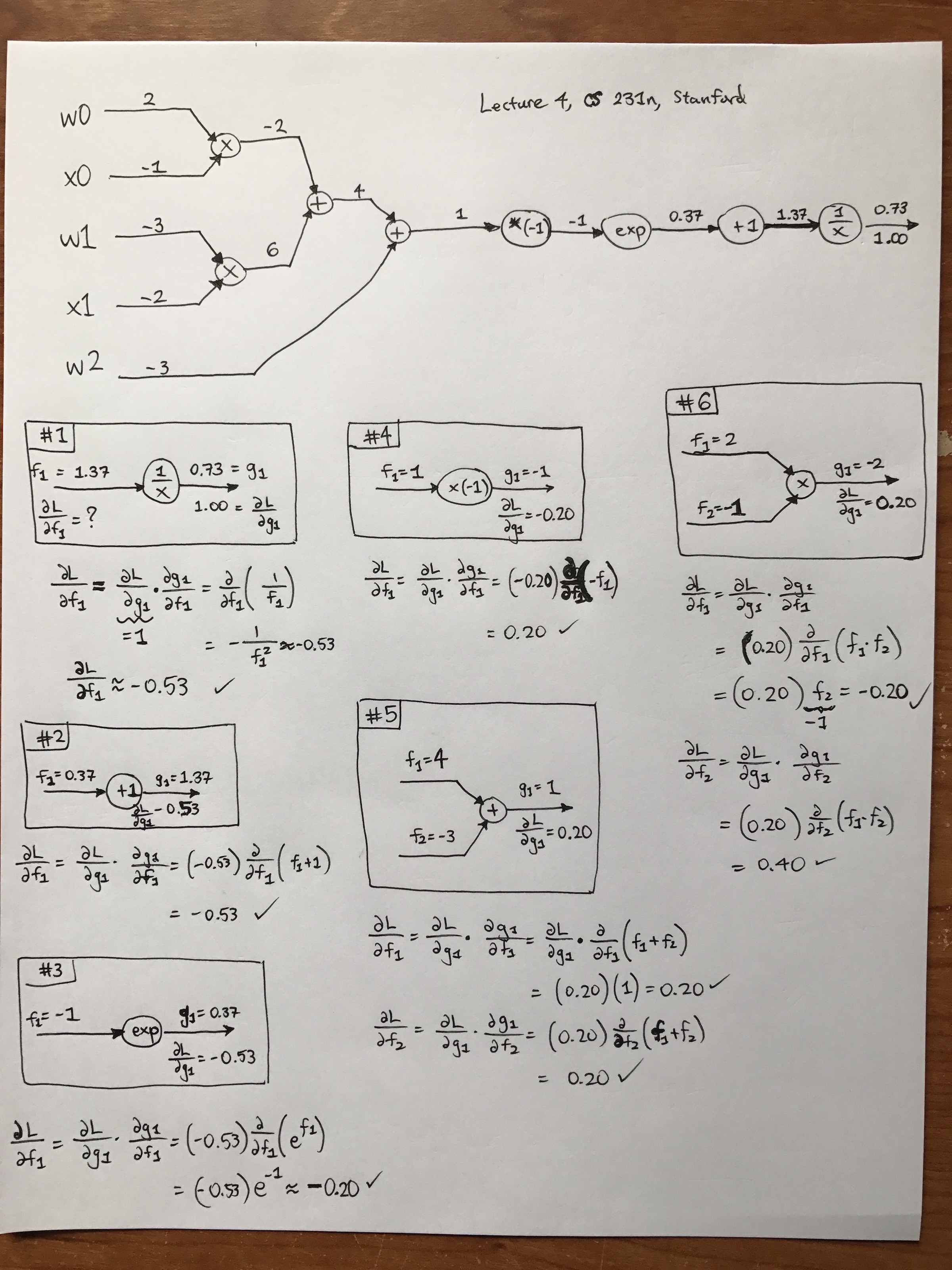 Another note: from the image, you can see that this is from the fourth lecture of CS 231n class. I watched that video on YouTube, which is excellent and of high-quality. Fortunately, there are also automatic captions which are highly accurate. (There’s an archived reddit thread discussing how Andrej Karpathy had to take down the videos due to a related lawsuit I blogged about earlier, but I can see them just fine. Did they get back up somehow? I’ll write more about this at a later date.)

When I was going through the math here, I came up with several rules to myself:

Hopefully this will be helpful to beginners using computational graphs.

Now let’s get to the big guns — vectors/matrices/tensors. Vectors are a special case of matrices, which are a special case of tensors, the most generalized \(n\)-dimensional array. For this section, I will continue using the “partial derivative” notation \(\frac{\partial}{\partial x}\) to represent any derivative form (scalar, vector, or matrix).

Our first example will be with ReLUs, because that was covered a bit in the CS 231n lecture. Let’s suppose \(x \in \mathbb{R}^3\), a 3-D column vector representing some data from a hidden layer deep into the network. The ReLU operation’s forward pass is extremely simple: \(y = \max\{0,x\}\), which can be vectorized using np.max.

The most interesting part of this happens when we expand the Jacobian and see that we have a bunch of derivatives, but they all evaluate to zero on the off-diagonal. After all, the effect (i.e. derivative) of \(x_2\) will be zero for the function \(\max\{0,x_3\}\). The diagonal term is only slightly more complicated: an indicator function (which evaluates to either 0 or 1) depending on the outcome of the ReLU. This means we have to cache the result of the forward pass, which easy to do in the CS 231n assignments.

How does this get combined into the incoming (i.e. “upstream”) gradient, which is a vector \(\frac{\partial L}{\partial y}\). We perform a matrix times vector operation with that and our Jacobian from above. Thus, the overall gradient we have for \(x\) with respect to the loss function, which is what we wanted all along, is:

This is as simple as doing mask * y_grad where mask is a numpy array with 0s and 1s depending on the value of the indicator functions, and y_grad is the upstream derivative/gradient. In other words, we can completely bypass the Jacobian computation in our Python code! Another option is to use y_grad[x <= 0] = 0, where x is the data that was passed in the forward pass (just before ReLU was applied). In numpy, this will set all indices to which the condition x <= 0 is true to have zero value, precisely clearing out the gradients where we need it cleared.

Remark: this process of computing derivatives will be similar to other activation functions because they are elementwise operations.

Now let’s discuss a layer which isn’t elementwise: the fully connected layer operation \(WX+b\). How do we compute gradients? To start, let’s consider one 3-D element \(x\) so that our operation is

According to the chain rule, the local gradient with respect to \(b\) is

Since we’re doing backpropagation, we can assume the upstream derivative is given, so we only need to compute the \(2\times 2\) Jacobian. To do so, observe that

and a similar case happens for the second component. The off-diagonal terms are zero in the Jacobian since \(b_i\) has no effect on \(y_j\) for \(i\ne j\). Hence, the local derivative is

That’s pretty nice — all we need to do is copy the upstream derivative. No additional work necessary!

Remark: crucially, notice that the elements of \(b\) are repeated across columns.

How do we compute the local derivative? We can try writing out the derivative rule as we did before:

but the problem is that this isn’t matrix multiplication. Here, \(y\) is a function from \(\mathbb{R}^2\) to \(\mathbb{R}^{2\times n}\), and to evaluate the derivative, it seems like we would need a 3-D matrix for full generality.

See what happened? This immediately reduced to the same case we had earlier, with a \(2\times 2\) Jacobian being multiplied by a \(2\times 1\) upstream derivative. All of the Jacobians turn out to be the identity, meaning that the final derivative \(\frac{\partial L}{\partial b}\) is the sum of the columns of the original upstream derivative matrix \(Y\). As a sanity check, this is a \((2\times 1)\)-dimensional vector, as desired. In numpy, one can do this with something similar to np.sum(Y_grad), though you’ll probably need the axis argument to make sure the sum is across the appropriate dimension.

We fortunately see that it simplifies to a simple matrix product! This seems to suggest the following rule: try to simplify any expressions to straightforward Jacobians, gradients, or scalar derivatives, and sum over as needed. Above, splitting the components of \(y^{(1)}\) allowed us to utilize the derivative \(\frac{\partial y_i^{(1)}}{\partial W}\) since \(y_i^{(1)}\) is now a real-valued function, thus enabling straightforward gradient derivations. It also meant the upstream derivative could be analyzed component-by-component, making our lives easier.

A similar case holds for when we have multiple columns \(x^{(i)}\) in \(X\). We would have another sum above, over the columns, but fortunately this can be re-written as matrix multiplication.

How do we compute the convolutional layer gradients? That’s pretty complicated so I’ll leave that as an exercise for the reader. For now.