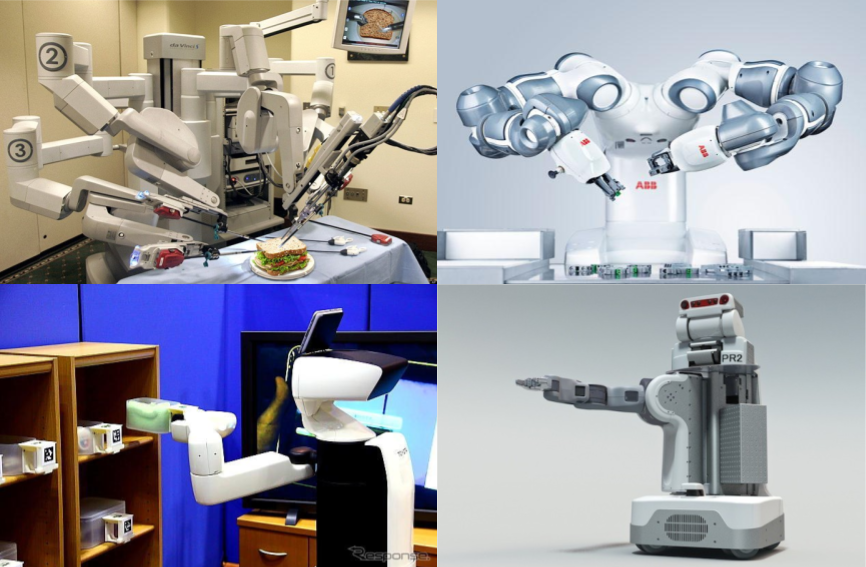 Clockwise, starting from top left: the Da Vinci, the ABB YuMi, the PR2, and the Toyota HSR.

I now have several months of research experience in robotics. I am familiar with the following four robots, roughly in descending order of my knowledge of them:

I have sadly never touched or worked with the YuMi and the PR2, though I’ve manipulated the Da Vinci on a regular basis. The one-sentence summary: it’s a surgical robotics system which is currently the only such system approved by the U.S. Food and Drug Administration.

This is interesting. Now let’s switch to another topic: suppose you talk to a layperson about working in robotics. One typical, half-serious conversation involves this question: when will your robots take over the world?

I would respond by pointing out the obvious restrictions placed on the Da Vinci. It’s fixed to a base, with arms that perform a strictly limited set of surgery-related functions. So … it can’t really “join forces” with other Da Vincis and somehow navigate the real world.

But perhaps, your conversationalist argues, that we can take the arms of the Da Vinci and integrate them to a mobile robot (e.g. the Toyota HSR). If the Da Vinci works in surgical applications, then it must logically be very nimble-fingered2. Think of the things it can do! It can pick locks, use car keys, redirect electric wires, and so forth.

Alas, from my experience, it’s difficult to even get the robot arms to go where I want to them to go. To make this more concrete, suppose we’re looking at an image of a flat surgical platform through the Da Vinci camera mounted above. When we look at the image, we can visually identify the area where we want the arm (or more precisely, the “end effectors”) to go to, and we can figure out the pixel values. Mathematically, given \((x_p,y_p)\) in pixel space, with \(x_p,y_p\) positive integers typically bounded by 1080 and 1920 (i.e. the resolution) we want to find the corresponding six-dimensional robot coordinates \((x_r,y_r,z_r,y_r,p_r,r_r)\) where I’ve added yaw, pitch, and roll along with the \(r\) subscript representing “robot.”

The problem is that we can’t directly convert from pixel to robot points. The best strategy I’ve used for dealing with this is to do some supervised learning. Given known \(x_p,y_p\) points, I can manually move the robot end effectors to where they should be. Then my code can record the robot coordinates. I repeat this process many times to get a dataset, then perform supervised learning (e.g. with a random forest) to find the mapping. Finally, I use that map in real experiments.

This is the process of calibration. And unfortunately, it doesn’t work that well. I’ve found that I consistently get errors of at least 4 millimeters, and for automated robot surgery that’s pretty dangerous. To be clear, I’m focused on automated surgery, not teleoperation, which is when a human expert surgeon controls some switches which then translate to movement of the Da Vinci arms.

Indeed, calibration is a significant enough problem that it can be part of a research paper on its own. For instance, here’s a 2014 paper from the IEEE International Conference on Automation Science and Engineering (CASE) which deals with the problem of kinematic control (which involves calibration).

Calibration — or more broadly, kinematic control — is one of those necessary evils for research. I will tolerate it because I enjoy working with robotics and with enough manual time, usually calibration becomes workable for running experiments.

I hope to continue working with robotics to make them be more autonomous. Sadly, they won’t be taking over the world.