For the fourth day of UAI 2017 (August 14), I skipped my 4:30am workout to get two more full practice runs of my talk. Thus, by the time I entered the conference venue, I was feeling confident. 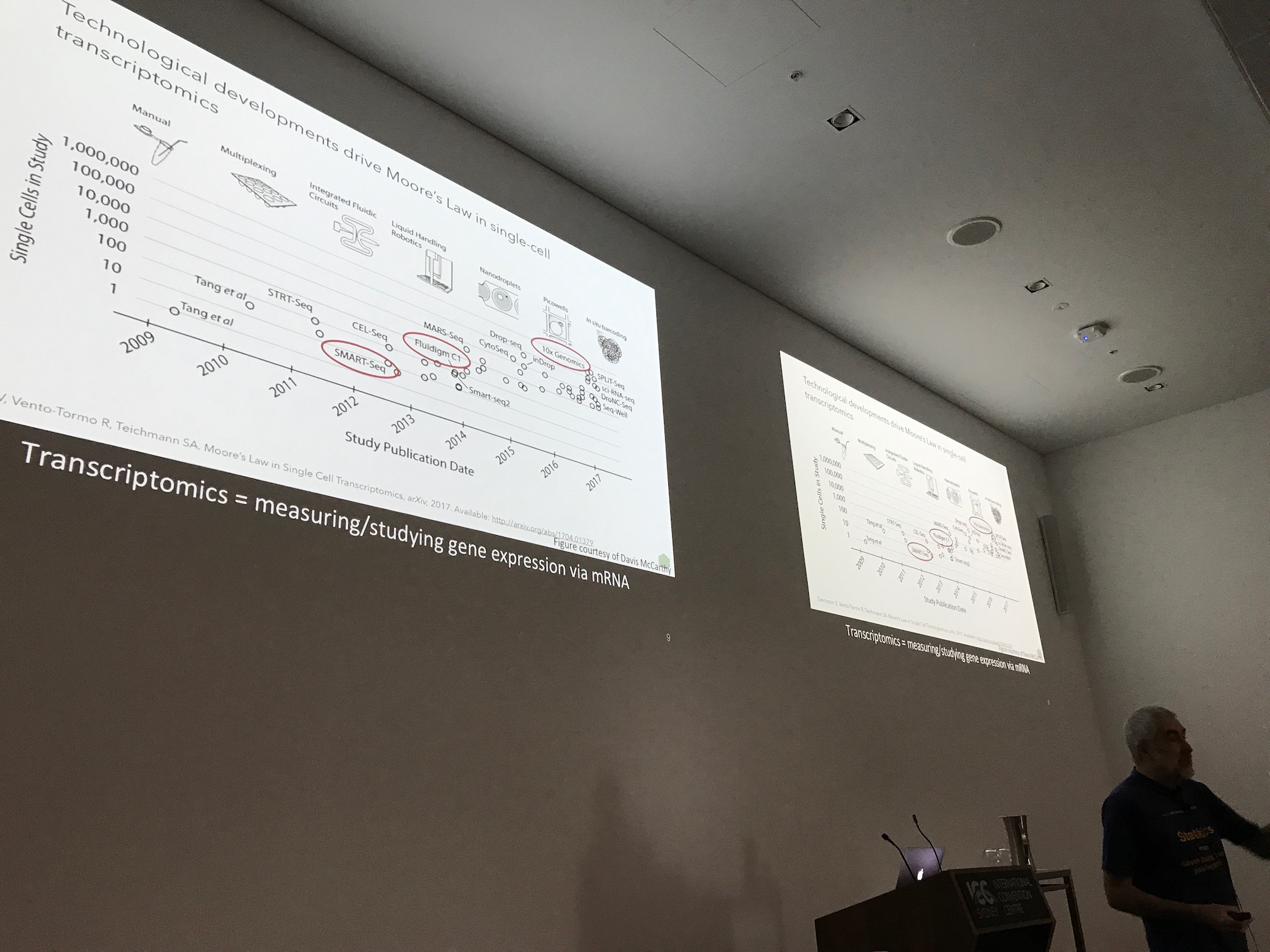 Professor Terry Speed gives the keynote talk of the day, and the fifth one overall for the conference.

The day started off with our last keynote for the conference, presented by Professor Terry Speed who currently works at the Walter and Eliza Hall Institute of Medical Research in Australia. Interestingly enough, he used to be a Berkeley statistics professor until his retirement in 2009.

His talk reminded me of Professor Heller’s talk from the other day. There’s a lot of work being done at the intersection of medicine and artificial intelligence. My impression is that Professor Speed’s work is more about RNA and DNA sequencing, while Professor Heller’s is about modeling diseases and health conditions. There might be overlap with the techniques they use, since both briefly mentioned (recurrent) neural networks. Yeah, they’ve fallen for the hype.

While Professor Speed is funny and skilled at presenting, I had a hard time processing the technical content, because I kept mentally rehearsing for my talk. This also happened during the first oral session (on causality) which preceded the one that contained my talk. Does anyone else find it hard to focus on talks that precede theirs?

Finally, at around noon, after several Disney Research people taught us about stochastic gradient descent for imbalanced data, it was my turn.

Whew … I walked up and got my laptop and clicker set up, though before I could begin, the conference chair gave a few remarks about my paper and then presented me with the Honorable Mention for Best Student Paper Award. After some applause, I also pointed out my coauthor John Canny in the audience, and got everyone to applaud for him as well. Then I began my talk.

I’m pleased to report that my talk went as well as I could have hoped for, with one exception that I’ll bring up later.

Here’s the list of rather sloppy reminders that I made for myself and which I reviewed beforehand:

I also wrote talk-specific reminders to include phrases such as “I hope you remember this” when reaching this slide, and so forth.

One thing that’s perhaps unique about me is my stance on giving talks. I touched up on this briefly when discussing my class review for Algorithmic Human-Robot Interaction, but I’ll expand the discussion here with some bold text to catch your attention.

I view talking in front of a large audience as an absolute privilege that I CANNOT waste. Thus, my talk must be polished, but in addition, I must make it MEMORABLE and keep the viewers as ALERT as possible. This means I need to be loud, funny, and highly active. Even if this comes at the cost of a slight reduction in the amount of technical material that appears on my slides.

For the vast majority of conference talks, while some audience members pay rigid attention, many will also be checking their phones and laptops. Realistically, there’s no way to keep everyone’s attention for the entire talk, especially in conferences when there are many talks back-to-back. Even with coffee, people can’t absorb all this information. Thus, I think it’s best to simply get the audience interested so that they can look up the material later in their own time.

One absolute sure-fire way to lose the already-fragile attention span of humans is to stand frozen behind a microphone and read off text-filled slides (or a pre-made script) with a flat voice. Sorry, but when people do that, I want to yell at them: What are you doing?!? You’re wasting such a great opportunity to impress your audience!! The fact that the majority of conference speakers — mostly students, but sometimes faculty are guilty of this as well — still do this is simply mind-boggling to me. It’s completely baffling.

Of course, there are certain times when it’s best not to follow my speaking techniques. I would obviously not apply this style at a funeral. Academia, however, is not entirely conservative in presentation style. Sure, you can be a boring robot reading off a script, but you can also be active and constantly be in engagement with the audience and no one’s going to stop you.

Whew. Anyway, sorry for that mini-rant but this felt like something important I should bring up. You can expect that whenever I give a polished academic talk at a conference, I am not going to be a boring or typical speaker.

For my talk, I did not stand behind the lectern with the microphone; I stood in front of it like Terry Speed did (see the picture above).

I also deliberately did not walk too fast when talking. The key is to walk a little bit, stand still, point the laser pointer at the slides, make a joke or two, make eye contact with the audience, and then slowly walk to the other side of the room.

I think the talk was great. I followed my advice and made some comments to get the crowd to laugh. One of them, for instance, was “please remember this figure for the rest of your life.”

OK, now what was that one “exception” I referred to earlier? It happened during the question-answer session. Professor John Duchi asked if I could prove that the method “converges to the correct posterior distribution” or something like that. I must have laid an egg because I don’t think my answer satisfied him (though to be fair, I thought his question was too vague).

Then John Duchi and coauthor John Canny (who were sitting next to each other) started discussing amongst themselves, as humorously pointed out by conference chair Kristian Kersting. Incidentally, Kristian was standing next to me during this Q&A to repeat questions from the audience, since I can’t hear/understand them. He had to relay John Duchi’s question to me even though John was literally five meters away from me.

After my talk concluded, the other conference chair, Gal Elidan, came to me and shook my hand (I didn’t see him do that to anyone else). Throughout the rest of the day, no less than six people came to me and said they liked my talk.

I certainly felt relieved after presenting. It was also our lunch break. I wasn’t sure what to do, but fortunately, John Canny came to my rescue and said that I should join him plus a few others for lunch. It turns out those “others” were: Gal Elidan, Kristian Kersting, Terry Speed, and John Duchi. Gulp. I would of course never have the courage to ask to join them for lunch myself, given that just about the only thing I’m better at than those guys is blogging.

John Duchi made the choice to eat at a small lunch/bar place called Social. I ate a pork burger and mostly watched the conversation, since I was unable to get involved. 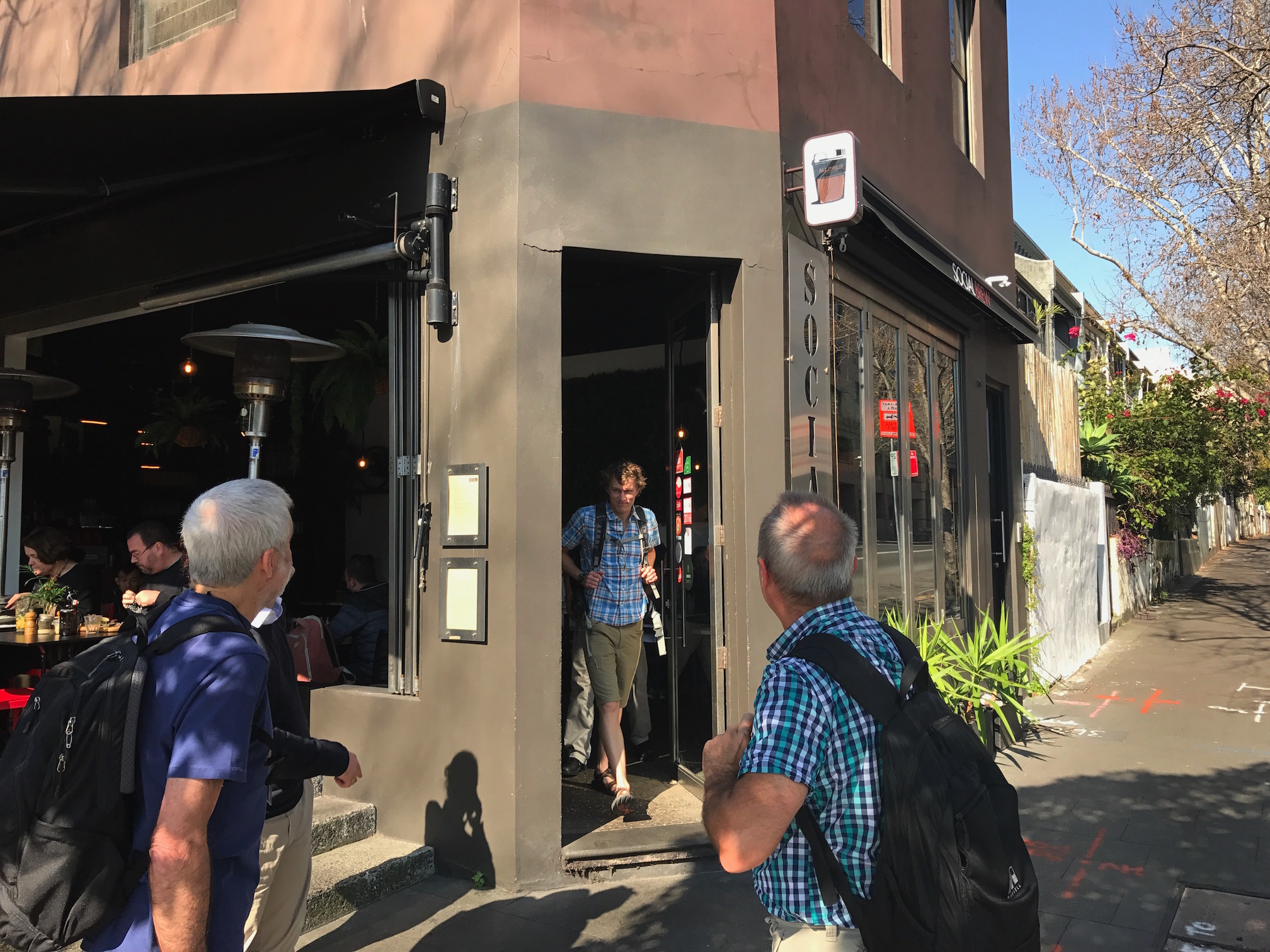 We finish lunch at Social. From left to right, we have Professors Terry Speed, Kristian Kersting (behind Terry Speed), Gal Elidan (behind John Duchi), John Duchi, and John Canny.

After that, we had another oral session and then a poster session.