Last Friday, I participated in the Bay Area Robotics Symposium for the first time. Since 2013, this has been an annual November event with alternating hosts of the University of California, Berkeley, and Stanford University. This year, it was held in Berkeley, and since by now I am closer to calling myself a robotics researcher, and additionally have (finally!) a robotics-related preprint online, I really had no excuse not to join this time around. 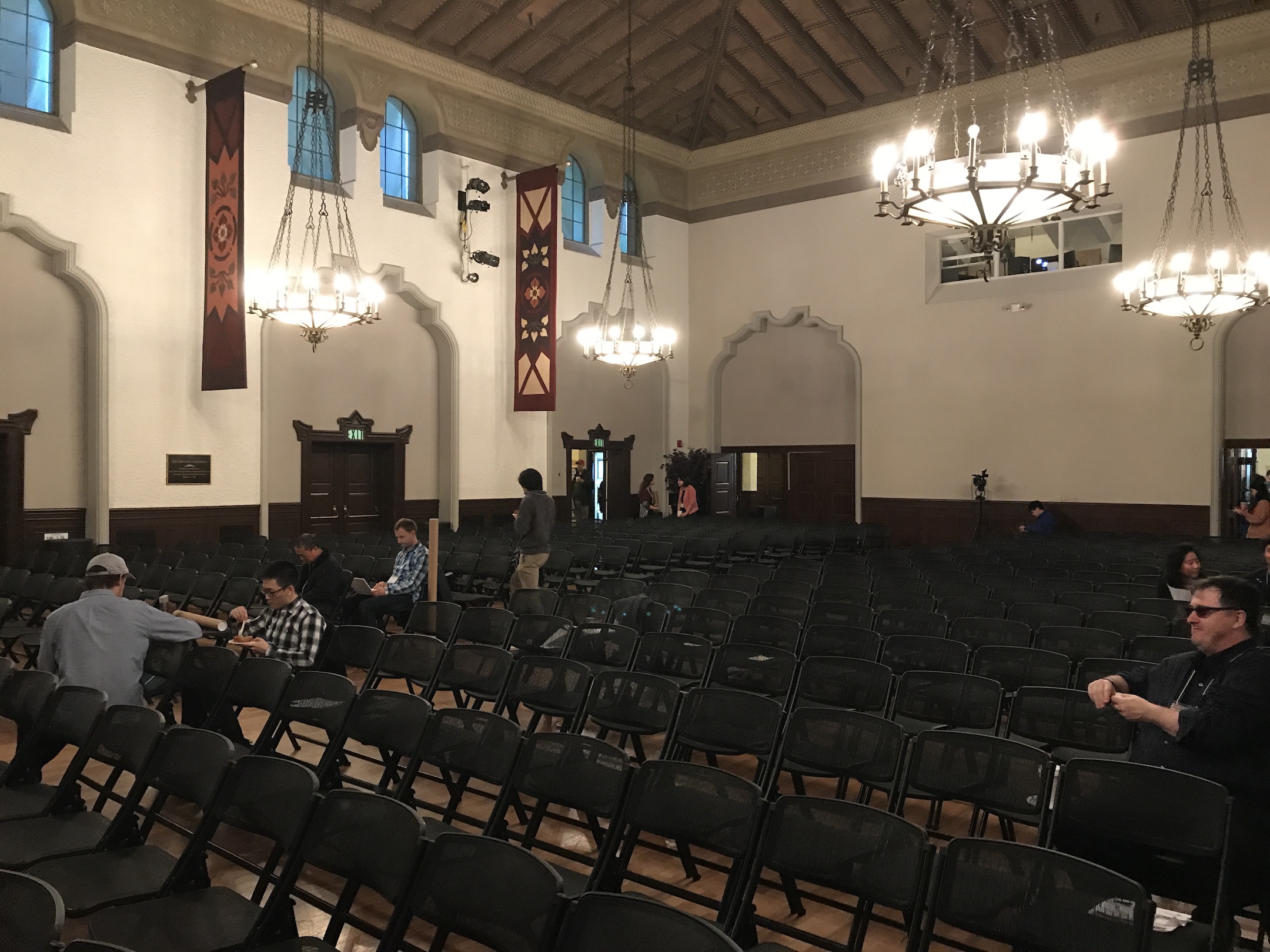 BARS took place at the International House in the southeast corner of the UC Berkeley campus. The talks were in the room shown in the picture above. As usual:

I normally follow the two rules above because of the need to (a) meet my sign language interpreters early, and (b) grab a seat by the front to get a good view of them. Sadly, it means that (as usual) I don’t get other students to sit next to me. In fact, the seats nearby me were empty. One of these days, I will figure out how to sit next to other students.

After about a 15 minute delay (typical Berkeley), BARS finally got started. The Berkeley host, Professor Anca Dragan, gave a few opening remarks, which included that BARS 2017 had (if I recall correctly) 392 people signed up. The capacity was 500, I think, and I’m actually surprised that we didn’t hit the limit. Perhaps CoRL 2017, held recently, meant that BARS 2017 was redundant?

Anyway, soon we started off with the agenda. We started with the first of four sets of faculty talks, each consisting of six faculty giving ten minute talks. Berkeley Professor Pieter Abbeel started things off. 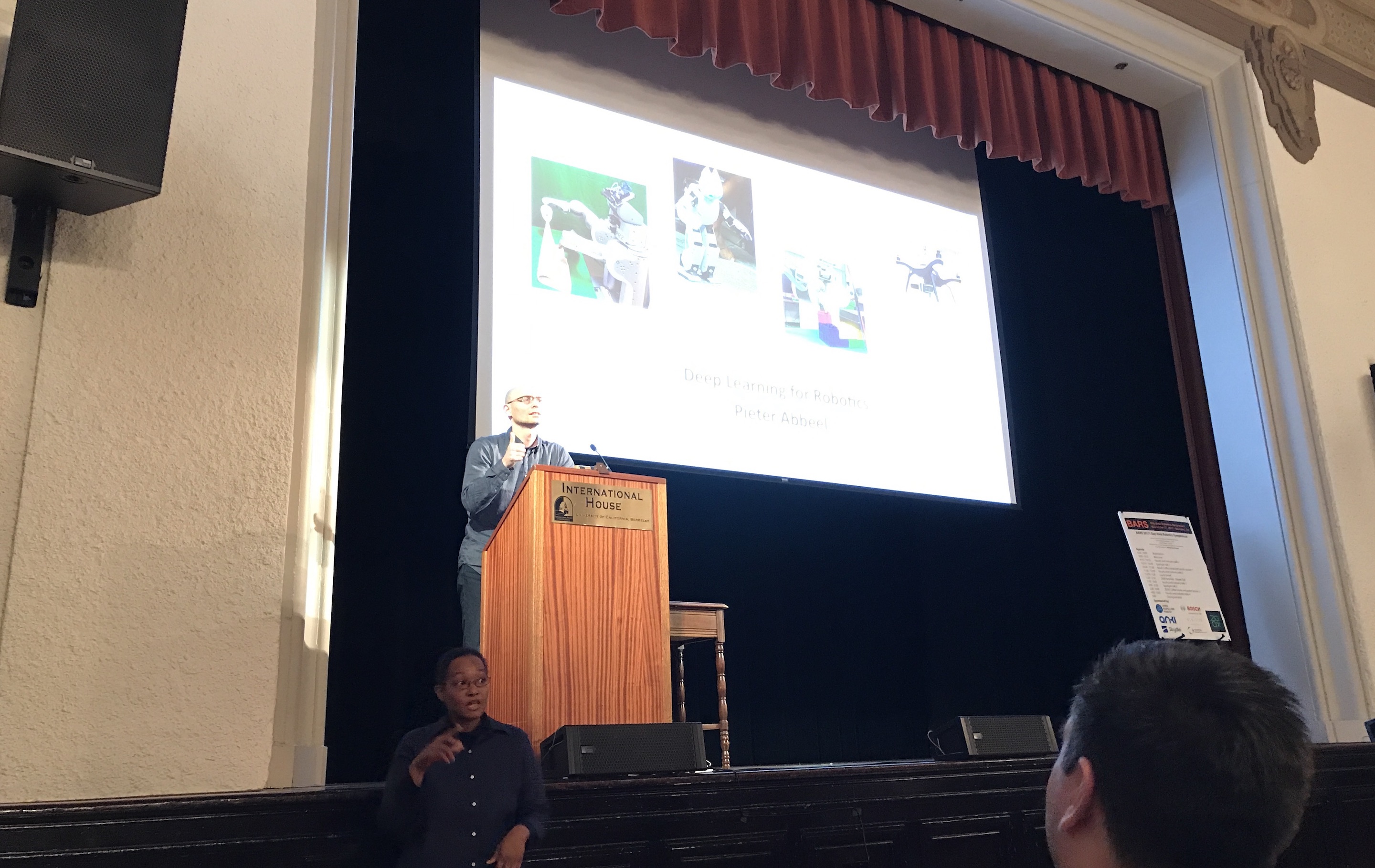 Pieter Abbeel started off the faculty talks. He presented "Deep Learning for Robotics". Apologies for the glare on the camera --- I am a rookie with using my iPhone for cameras. You can also see my sign language interpreter there, who had her work cut out for her due to Abbeel's fast and energetic speaking rate.

My goodness, how does he get all these papers?!? His talk started off by listing his long list of publications … in 2017 alone. Then he talked about Meta-Learning, which is what he’s most interested in nowadays within AI. (Just to be clear, I said “most interested,” not “the only thing he’s interested in.”) Incidentally, Abbeel was featured in the New York Times for co-founding Embodied Intelligence. I’m excited to see what they will produce.

We then had more faculty talks. Once these concluded, we moved on to the first of two student spotlight talk sessions, when students gave 1-minute lightning talks on their research. As expected, about 90% of the students went over their alloted time, and most wasted time by saying “My name is X and I’m a student at Y advised by Z and blah blah blah.” The good news is that many of the presentations were interesting enough to pique the curiosity of a nontrivial fraction of the audience. Then those folks can read the students’ papers in their own time.

I didn’t give a lightning talk. I’m not sure why, but I suppose professors could only pick two or three of their students due to time constraints.

We then had our first coffee break. Yay! I stood up, stretched, and briefly chatted with a few other people from Berkeley who I knew. I wish I had talked to some students from Stanford, though. How do people network to brand-new folks at events like these? I really wish I knew the answer.

After another set of faculty talks (including Ken Goldberg’s work on the Dexterity-Network), and then a lunch break, we had … our keynote talk. 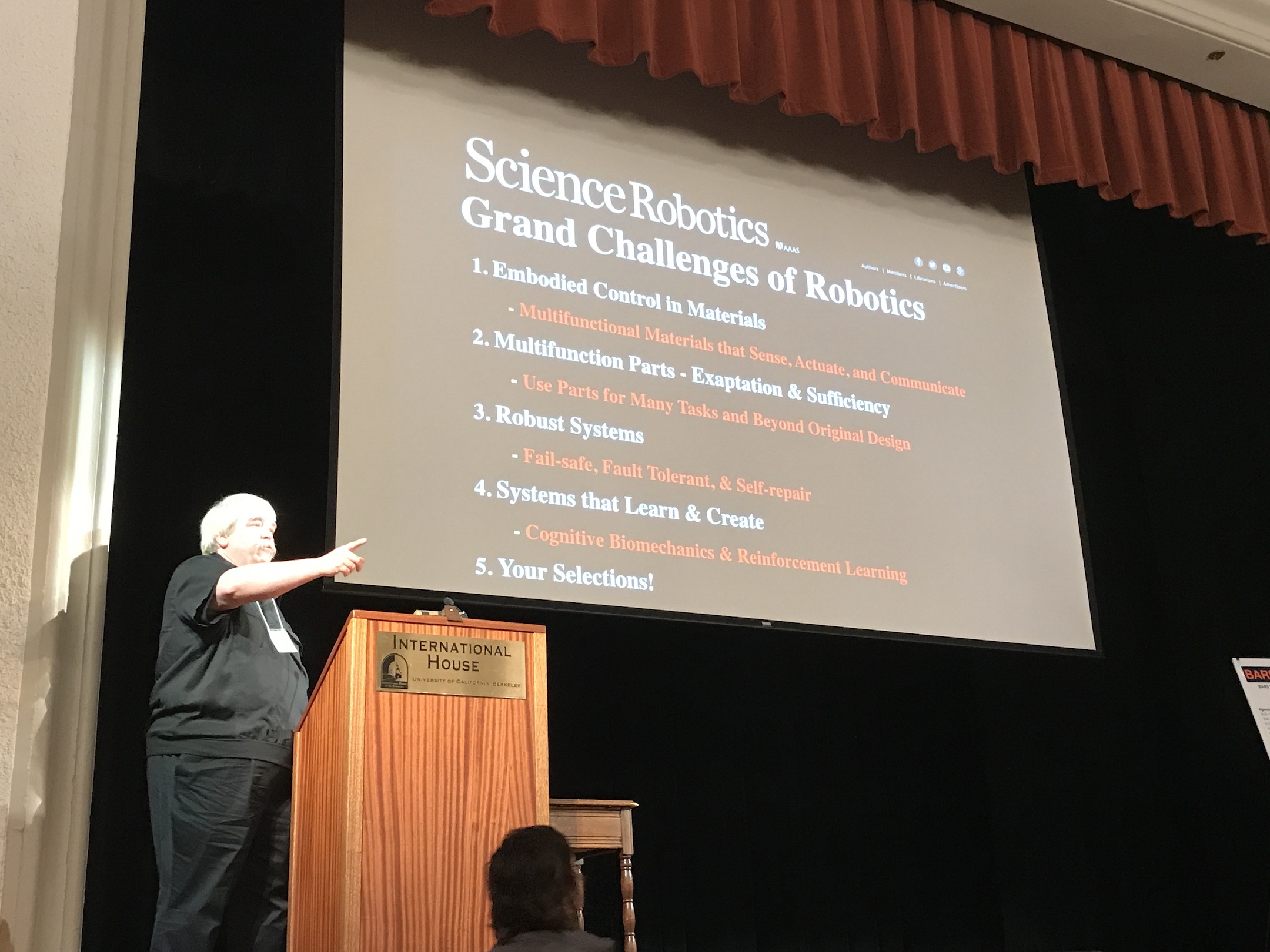 Professor Robert Full at the end of his keynote talk, asking the audience about our thoughts on a suitable "Grand Challenge" for robotics.

Professor Full isn’t technically a core robotics faculty — I think — because “biomechanics” is a better way of describing his work. But he quickly captivated the audience with his funny videos on insects and squirrels going through wild motions … and then videos of robots attempting to replicate that movement. I particularly liked the videos of insects and robots that were able to resist insane amounts of forces and squeeze their way through impossibly tiny paths. Judging from the frequent audience laughter, I wasn’t the only one who enjoyed his talk.

Towards the end, Professor Full asked us for “Grand Challenges” of Robotics. One of the professors who I work with, Ken Goldberg, offered “the ability of a robot to pick up anything a human can pick up, including stuff that doesn’t want to be picked up.” You can verify this by looking at his Twitter. I agree with him.

Ken, meanwhile, helped me out a bit later that day. During the second coffee break, Ken gathered a few of his students (including me) and introduced us to Stanford Professor Allison Okamura, who’s also done some work on surgical robotics. At least I got to network a bit, which is better than the usual nothing!

We then had our second set of lightning talks, with the same old issues (people going over their time, etc.), and then our fourth set of faculty talks. This featured stars such as Jitendra Malik and Sergey Levine. I enjoyed Malik’s talk, which was entertaining for two reasons. First, he joked that vision and robotics people (and Malik is a vision person) were historically separate communities in AI, but after drastic improvements in image recognition due to Deep Learning, the “robotics people better pay attention to what the vision people are doing.”

The second joke Malik made was with regards to Stanford vs Berkley. The joke was that Stanford people could develop algorithms for robots (e.g., navigation) that perform well when applied to Stanford-based environments, but which fail on Berkeley-based environments. Why? Stanford is nice and clean, Berkeley is dirty and messy.

Well, UC Berkeley may be a bit run down, not to mention crowded (see image below), but it’s the people that matter, right? 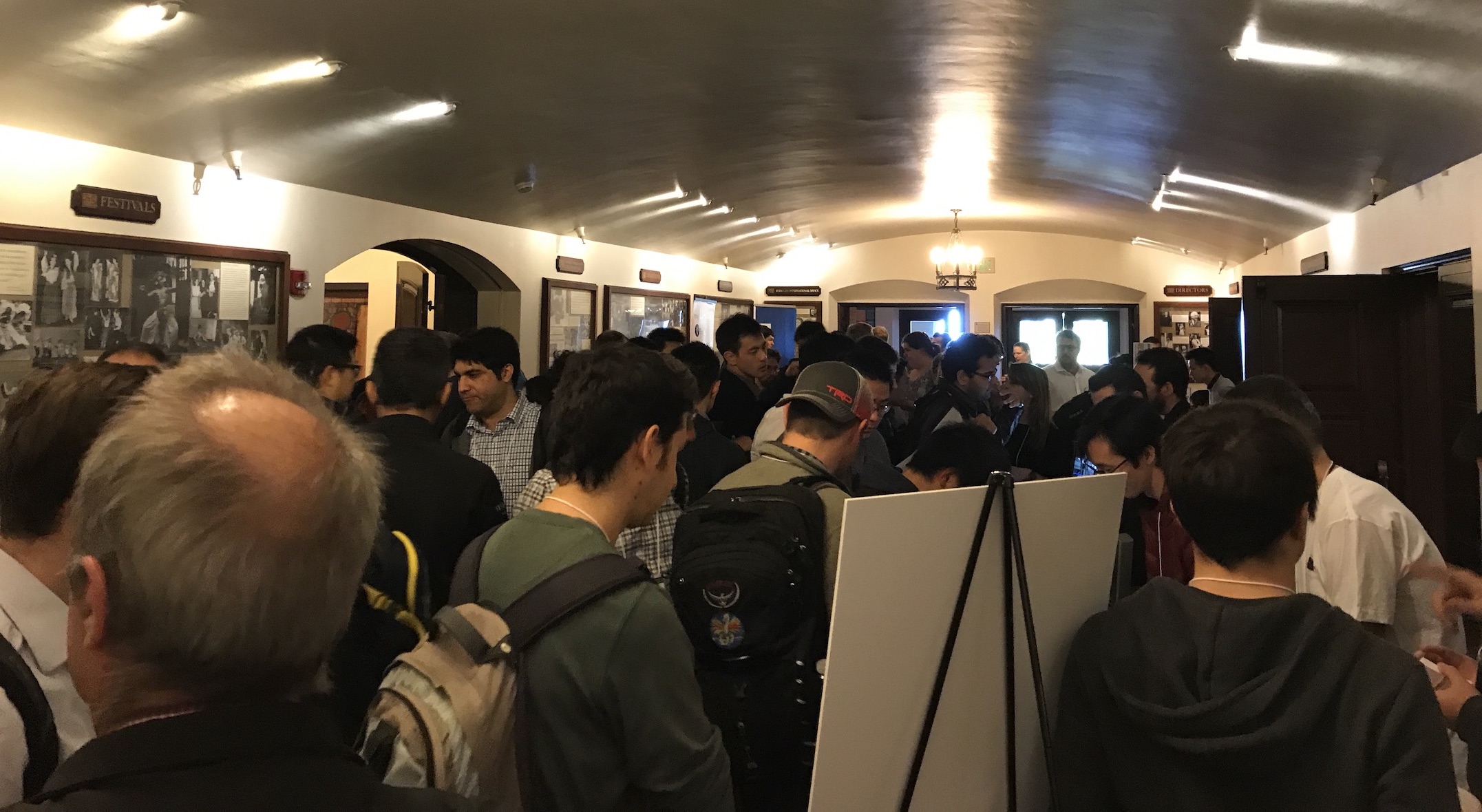 Yeowch. BARS sure was popular! Well, that, and the venue is a bit too small for what we're offering. No wonder I regularly hear complaints that Berkeley is too crowded.

Well, that’s a wrap. I look forward to attending BARS 2018 at Stanford. Thank you to everyone who helped make BARS 2017 happen!