Over the last few weeks, I have been devouring Murray, Li, and Sastry’s A Mathematical Introduction to Robotic Manipulation. It’s freely available online and, despite the 1994 publication date, is still relevant for robotic manipulation as it’s used in EE206 at Berkeley.

(The main novelty today, from my perspective, is the use of Deep Learning to automate out analytic models under certain conditions, but I still think it’s valuable for me to know classical robotics concepts.)

In this post, I discuss the Special Exponential group, denoted as \(SE(3)\). We can define it as follows:

This is the same as saying that \(R\) is a rotation matrix.

Side comment: the reason for “\((3)\)” as the input is that \(SE\) and \(SO\) can be generalized to an arbitrary amount of dimensions. However, I’m only concerned about robotic manipulation in \(\mathbb{R}^3\).

The above suggests the obvious question:

We use \(SE(3)\) to encode rigid body motions (RBMs) in robotic manipulation, which preserve distance between points and angles between vectors. RBMs consist of a rotation and a translation. To visualize RBMs, look at the left of the figure below. There are two coordinate frames: frame \(A\), which is “inertial” (I think of this as the “default” frame), and frame \(B\), attached to the base of the curvy object drawn there.

Vector \(p_{ab} \in \mathbb{R}^3\) shows the 3-D position of the origin of \(B\) with respect to \(A\). This ordering from \(B\) to \(A\) and not vice versa is important, and it’s important to know these well for robotic manipulation, which in advanced contexts relies on multiple, consecutive coordinate frames attached to links in a robot arm. For rotation matrices, we’ll keep the ordering of subscripts the same and write \(R_{ab}\) to indicate that it transforms 3-D points from frame \(B\) to frame \(A\). 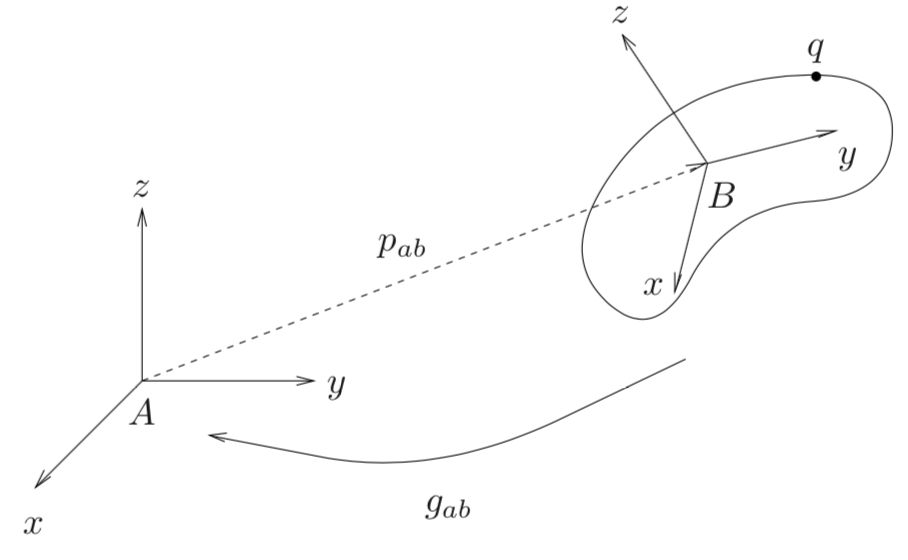 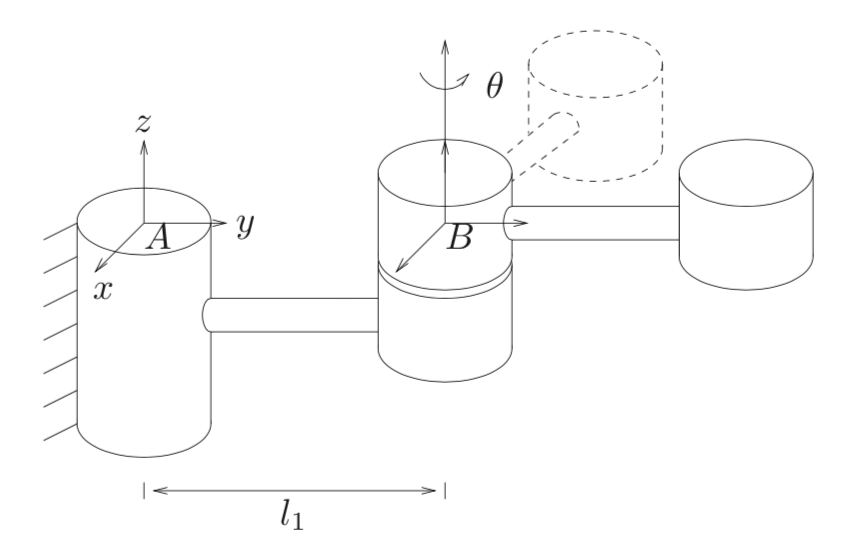 Keeping \(p_{ab}\) and \(R_{ab}\) separate can result in some cumbersome math when a bunch of rotations and translations are combined. Thus, it’s common to use homogeneous coordinates. A full discussion is beyond the scope of this blog post, but for us, the important point is that if \((p,R) \in SE(3)\), then the equivalent homogeneous representation is

where the “0” above is a row vector of three zeros. This enables us to perform one matrix-vector multiply for a 3-D point which is expanded with a fourth coordinate with a “1” in it. Thus, the origin point is \(o = (0,0,0,1)^T\), and for vectors — defined as the difference between two points — the fourth component is zero.

Let’s do an example. Consider the second image in the figure above, showing rotation about an axis \(\theta\). Given a fixed, “real-life”, physical point, let’s show how to encode a rigid body transformation which can transform a coordinate representation of that point from frames \(B\) to \(A\).

These two form our specification in \(SE(3)\). Combining these by using the homogeneous representation for compactness, our RBM from \(B\) to \(A\) is:

where \(\vec{a}\) and \(\vec{b}\) represent, in homogeneous coordinates, the same physical point but with respect to frames \(A\) and \(B\), respectively.