Sample efficiency is a huge problem in reinforcement learning. Popular general-purpose algorithms, such as vanilla policy gradients, are effectively performing random search in the environment1, and may be no better than Evolution Strategies, which is more explicit about acting random (I mean, c’mon). The sample-efficiency problem is exacerbated when environments contain sparse rewards, such as when it consists of just a binary signal indicating success or failure.

To be clear, the reward signal is an integral design parameter of a reinforcement learning environment. While it’s possible to engage in reward shaping (indeed, there is a long line of literature on just this topic!) the problem is that this requires heavy domain-specific engineering. Furthermore, humans are notoriously bad at specifying even our own preferences; how do we expect us to define accurate reward functions in complicated environments? Finally, many environments are most naturally specified by the binary success signal introduced above, such as whether or not an object is inserted into the appropriate goal state.

I will now summarize two excellent papers from OpenAI (plus a few Berkeley people) that attempt to improve sample efficiency in reinforcement learning environments with sparse rewards: Hindsight Experience Replay (NIPS 2017) and Overcoming Exploration in Reinforcement Learning with Demonstrations (ICRA 2018). Both preprints were updated in February so I encourage you to check the latest versions if you haven’t already.

Hindsight Experience Replay (HER) is a simple yet effective idea to improve the signal extracted from the environment. Suppose we want our agent (a simulated robot, say) to reach a goal \(g\), which is achieved if the configuration reaches the defined goal configuration within some tolerance. For simplicity, let’s just say that \(g \in \mathcal{S}\), so the goal is a specific state in the environment.

When the robot rolls out its policy, it obtains some trajectory and reward sequence

achieved from the current behavioral policy \(\pi_b\), internal environment dynamics \(P\), and (sparse) reward function \(R\). Clearly, in the beginning, our agent’s final state \(s_T\) will not match the goal state \(g\), so that all the rewards \(r_t\) are zero (or -1, as done in the HER paper, depending on how you define the “non-success” reward).

The key insight of HER is that during those failed trajectories, we still managed to learn something: how to get to the final state of the trajectory, even if it wasn’t what we wanted. So, why not use the actual final state \(s_T\) and treat it as if it was our goal? We can then add the transitions into the experience replay buffer, and run our usual off-policy RL algorithm such as DDPG.

In OpenAI’s recent blog post, they have a video describing their setup, and I encourage you to look at the it along with the paper website — it’s way better than what I could describe. I’ll therefore refrain from discussing additional HER algorithmic details here, apart from providing a visual which I drew to help me better understand the algorithm: 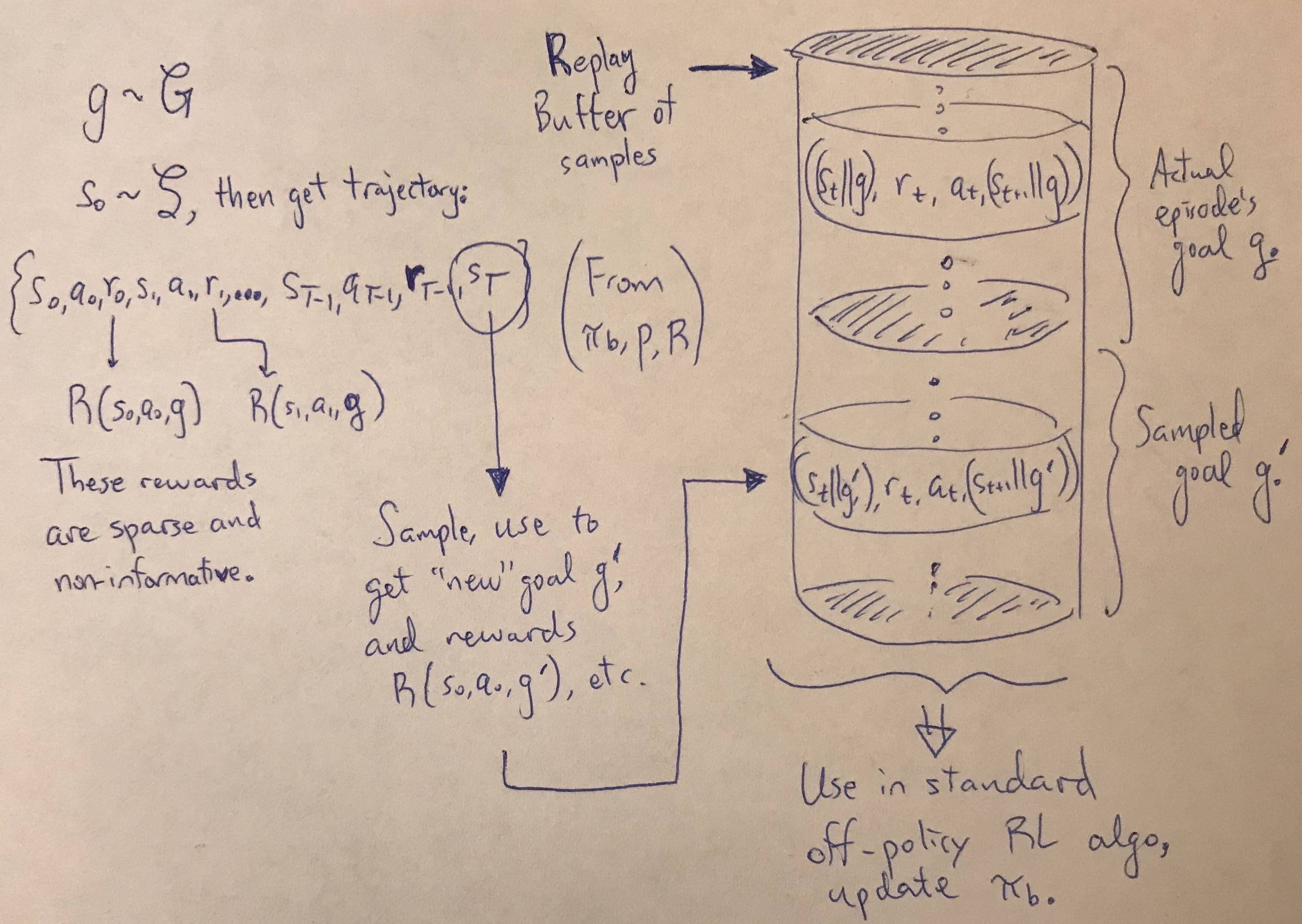 My visualization of Hindsight Experience Replay.

There are a number of experiments that demonstrate the usefulness of HER. They perform experiments on three simulated robotics environments and then on a real Fetch robot. They find that:

This paper extends HER and benchmarks using similar environments with sparse rewards, but their key idea is that instead of trying to randomly explore with RL algorithms, we should use demonstrations from humans, which is safer and widely applicable.

I enjoyed reading about this algorithm. It raises important points about how best to interleave demonstrator data within a reinforcement learning procedure, and some of the concepts here (e.g., resets) can easily be combined with other algorithms.

Their experimental results are impressive, showing that with demonstrations, they outperform HER. In addition, they show that their method works on a complicated, long-horizon task such as block stacking.

I thoroughly enjoyed both of these papers.

If there are any possible downsides, it could be that:

For both papers, I was initially disappointed that there wasn’t code available. Fortunately, that has recently changed! (OK, with some caveats.) I’ll go over that in a future blog post.