The second day started out much like the first one. I went for a run, this time in the opposite direction as I did yesterday to explore a different part of the bay. I ran for a few miles, then went back to the hotel to get ready for the conference. This time, I skipped the hotel’s breakfast, since I wanted to save money and I figured the conference would give us a heaping of food today, as they did yesterday (I was right).

After some customary opening remarks, we had the first plenary talk. Just to be clear, ICRA has two main talk styles:

Professor and entrepreneur Rodney Brooks was scheduled to give the first plenary talk, and in many ways he is an ideal speaker. Brooks is widely regarded in the field of robotics and AI, with papers galore. He’s also an entrepreneur, having founded iRobot and Rethink Robotics. I’ll refer you to his website so that you can feel inadequate.

The other reason why Brooks must have been invited as a speaker is that he’s a native Australian (Peter Corke emphasized: “with an Australian passport!”), and 2018 is the first year that ICRA has been held in Australia. (Though, having said that, I wonder why they didn’t invite my advisor, John Canny, who like Brooks is also Australian — in fact, Canny is also from the Adelaide area. Of course, with only three plenaries, it would look too much like “home cooking” with two Australians speaking …)

Brooks gave an engaging, high-level talk on some of the challenges that we face today in robotics applied to the real world. He talked about demographics, climate change (see next image), and issues with self-driving cars deployed to the real world. There was also an entertaining rant about the state of modern Human-Robot Interaction research, since we’re using Amazon Mechanical Turk (ugh) and still relying on dumb-ass \(p\)-values (ugh ugh). 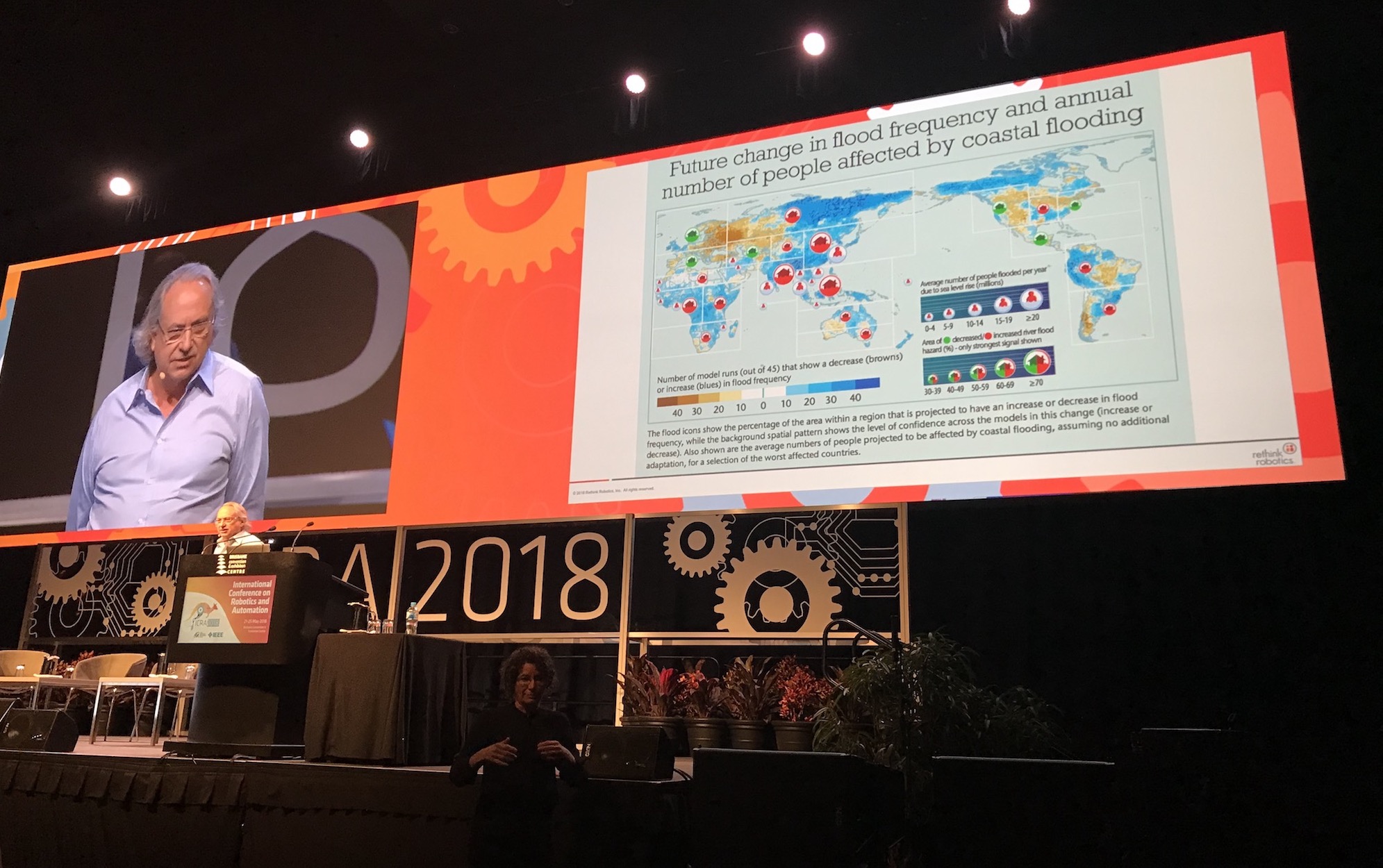 Then we had the “morning tea” (or more accurately: tea and coffee and pastries and fruits) plus the morning poster session held simultaneously, in the same room as the welcome reception from last night. This was the first of six major poster sessions (morning and afternoon for each of Tuesday, Wednesday, and Thursday). It consisted of several “pods” that you can see here: 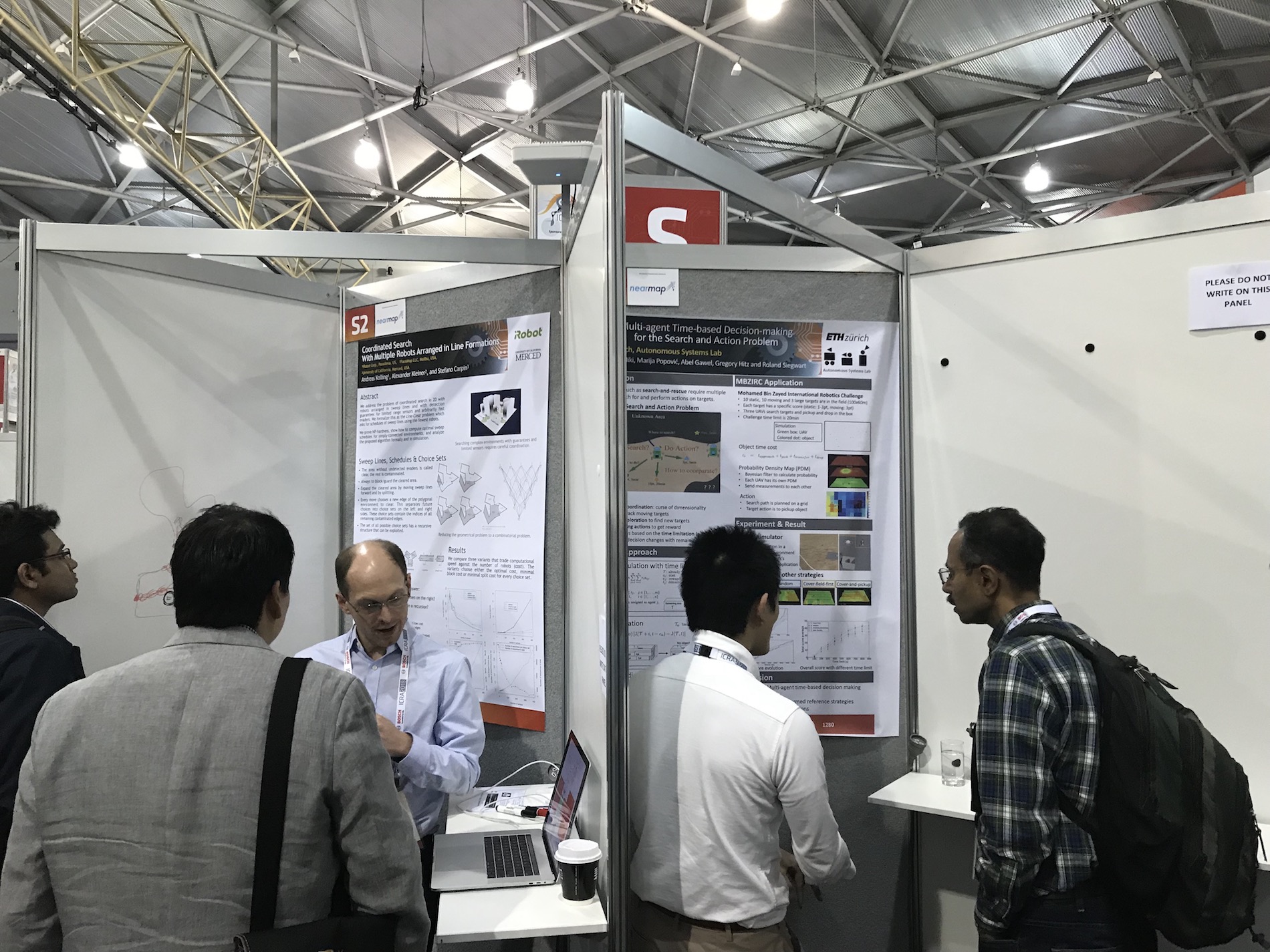 The pods that were set up in the poster session.

I think the arrangement seems interesting, and is different from the usual straight aisles that we see in poster sessions. The pods make it easier to see which papers are related to each other since all one has to do is circle the corresponding pod. They might also be more space-efficient.

The food at the poster session was plentiful: 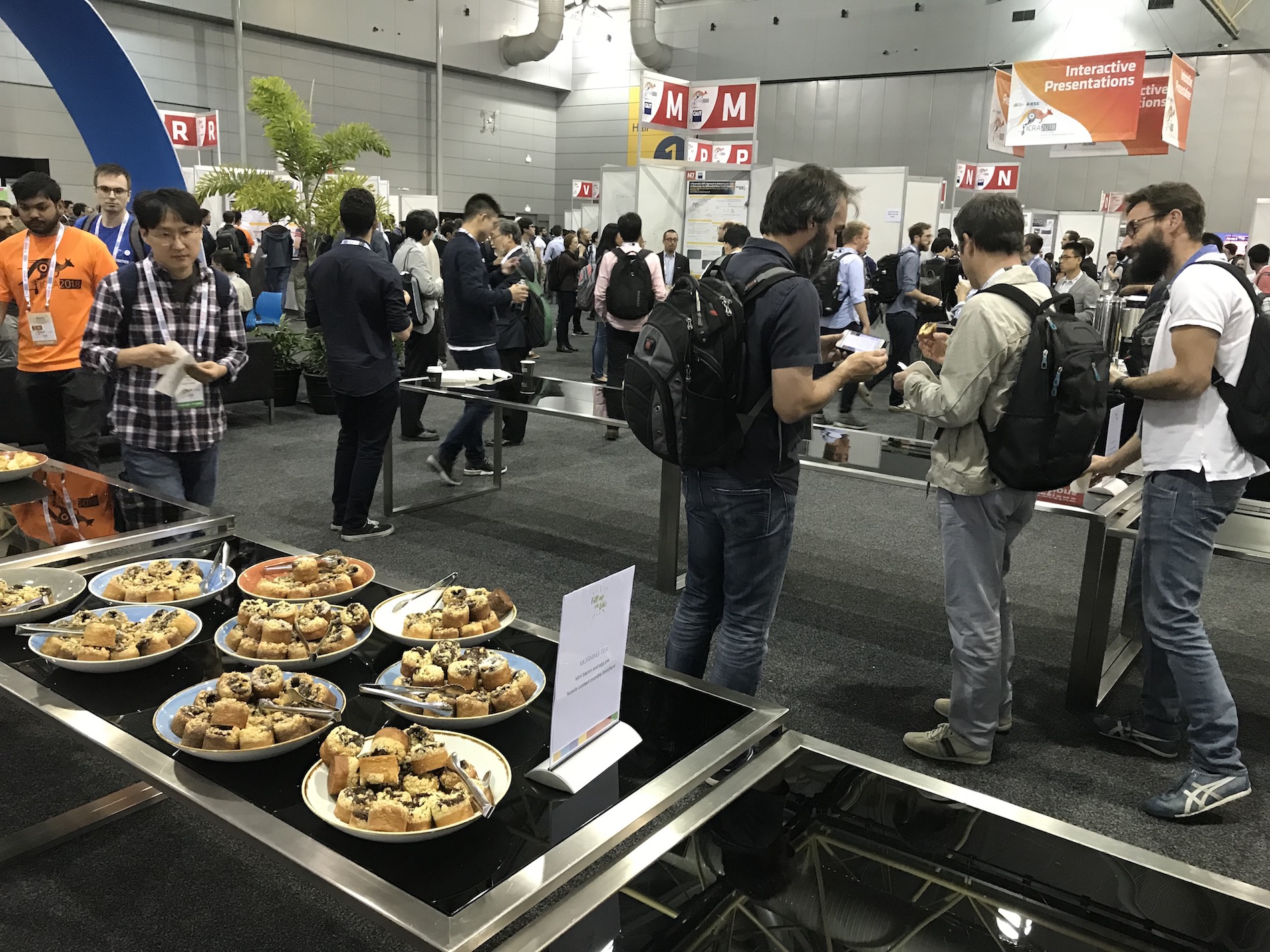 The catering services in the morning tea session.

It again wasn’t the standard kind of food you’d expect at your standard American hotel, reflecting both the diversity of food in Australia and also the amount of money that ICRA has due to sponsors and high registration fees. Oh, and the silly surcharge for extra pages in papers.

Ironically, the coffee and hot water stations appeared to be frequently empty or close to empty, prompting one of the sign language interpreters to argue that this was the reverse of last night, in which we had far too easy access to lots of drinks, but not much access to food.

Closer to noon, while the poster session was still going on — though I think most attendees stated to tire of walking around the pods — the employees brought out some lunch-style food. 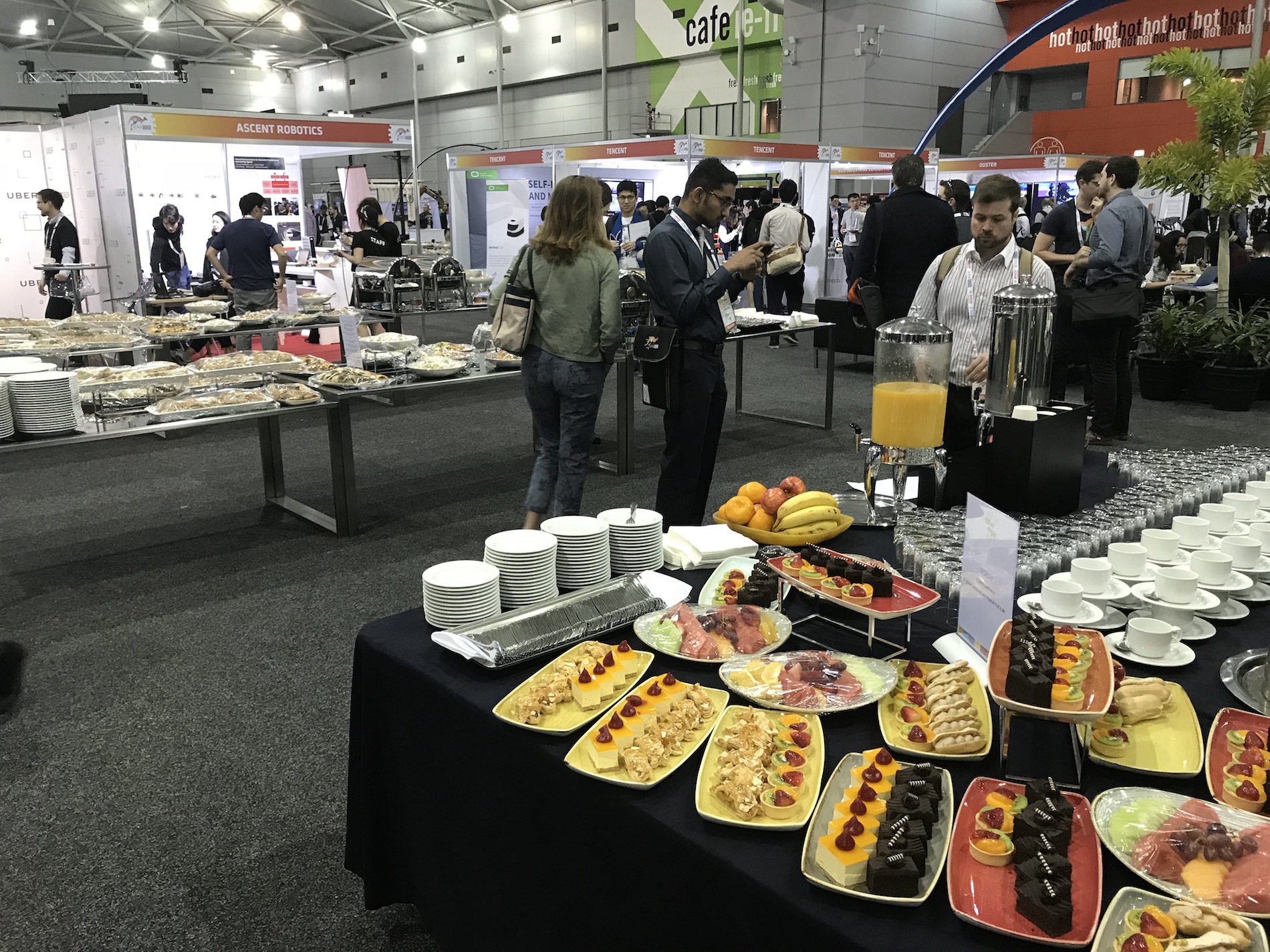 The food scene after the convention employees brought lunch.

All of this was happening in half of the gigantic exhibition area. The other half had industry sponsor booths, like in the welcome reception from last night. You can see a few of them in the background of the above photo.

I took a break to relax and read a research paper since my legs were tired, but by 2:00pm, another one of the day’s highlights occurred: Professor Ken Goldberg’s keynote talk on grasping and experiment reproducibility: 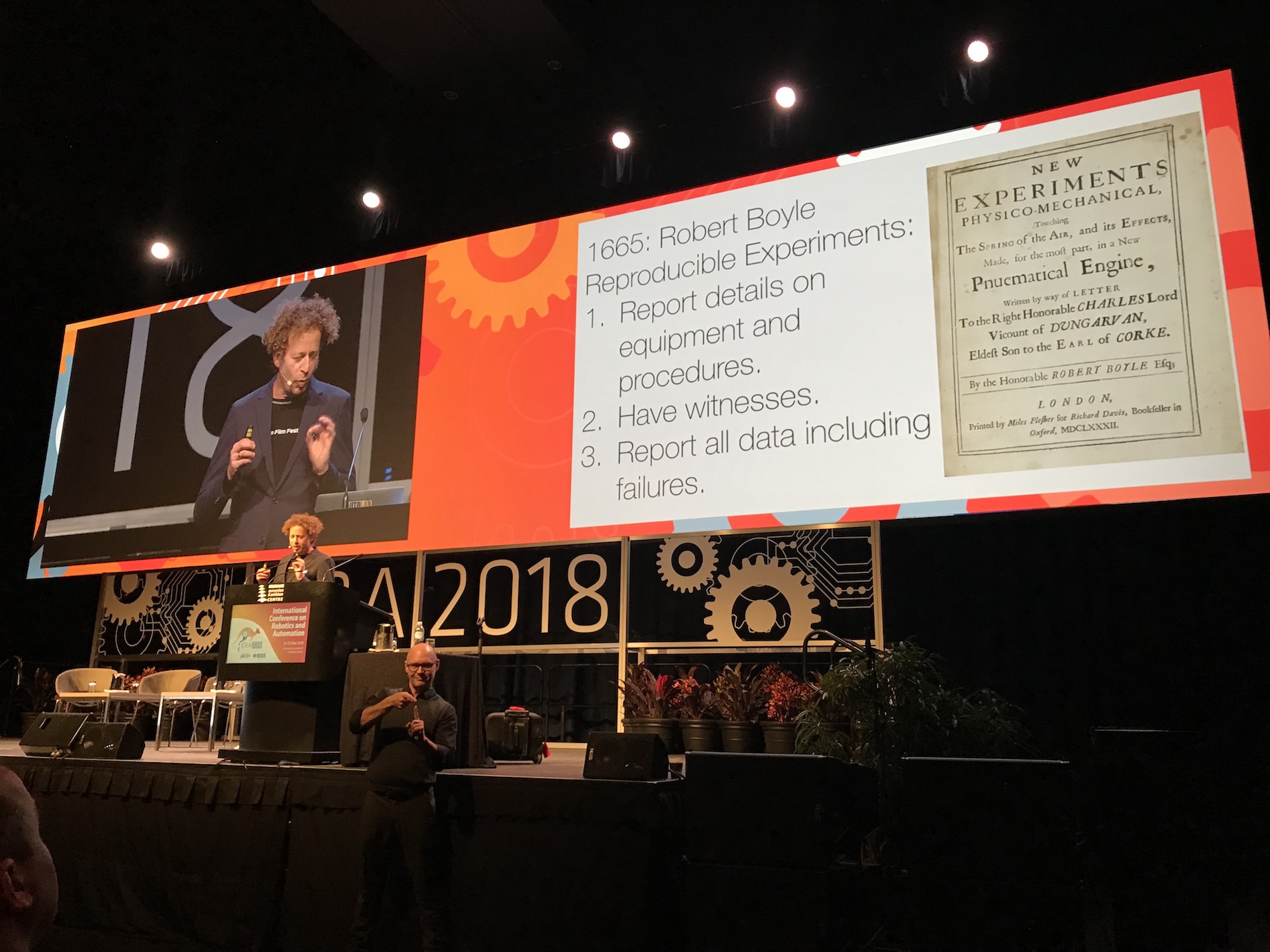 It was a terrific talk, and I hope that people will also start putting failure cases in papers. I will remember this, though I think I am only brave enough to put failure cases in appendices, and not the main page-constrained portion of my papers.

After Ken’s talk, there was another poster session with even more food, but frankly, I was so full and a bit weary of constantly walking around, so I mostly just said hi to a few people I knew and then went back to the hotel. There was a brief Nvidia-hosted reception that I attended to get some free food and wine, but I did not stay very long since I did not know anyone else.

Before going to sleep, I handled some administration with my schedule. I tried to reassure the person who was handling the sign language accommodation that, for the poster sessions, it is not necessary to have two or more interpreters since I spend the time mostly wandering around and taking pictures of interesting papers. It’s impossible to deeply understand a paper just by reading a poster and talking with the author, so I take pictures and then follow-up by reading as needed.

I also asked her to cancel the remaining Deaf/Hearing Interpreter (DI/HI) appointments since those were simply too difficult for me to understand and to benefit (see my previous post for what these entail). To be fair, the other “normal” interpreting services were not that beneficial, but I could at least understand perhaps 10-30% of the content in “broken” fashion. But for DI/HI, I simply don’t think it’s helpful to have spoken English translated to Australian sign language, and then translated to American/English sign language. I felt bad about canceling since it wasn’t the fault of the Deaf/Hearing Interpreter team, but at the same time I wanted to be honest about how I was feeling about the interpreting services.