For the third day, I did my usual morning run and then went to the conference. Today’s plenary was from DeepMind’s Raia Hadsell. 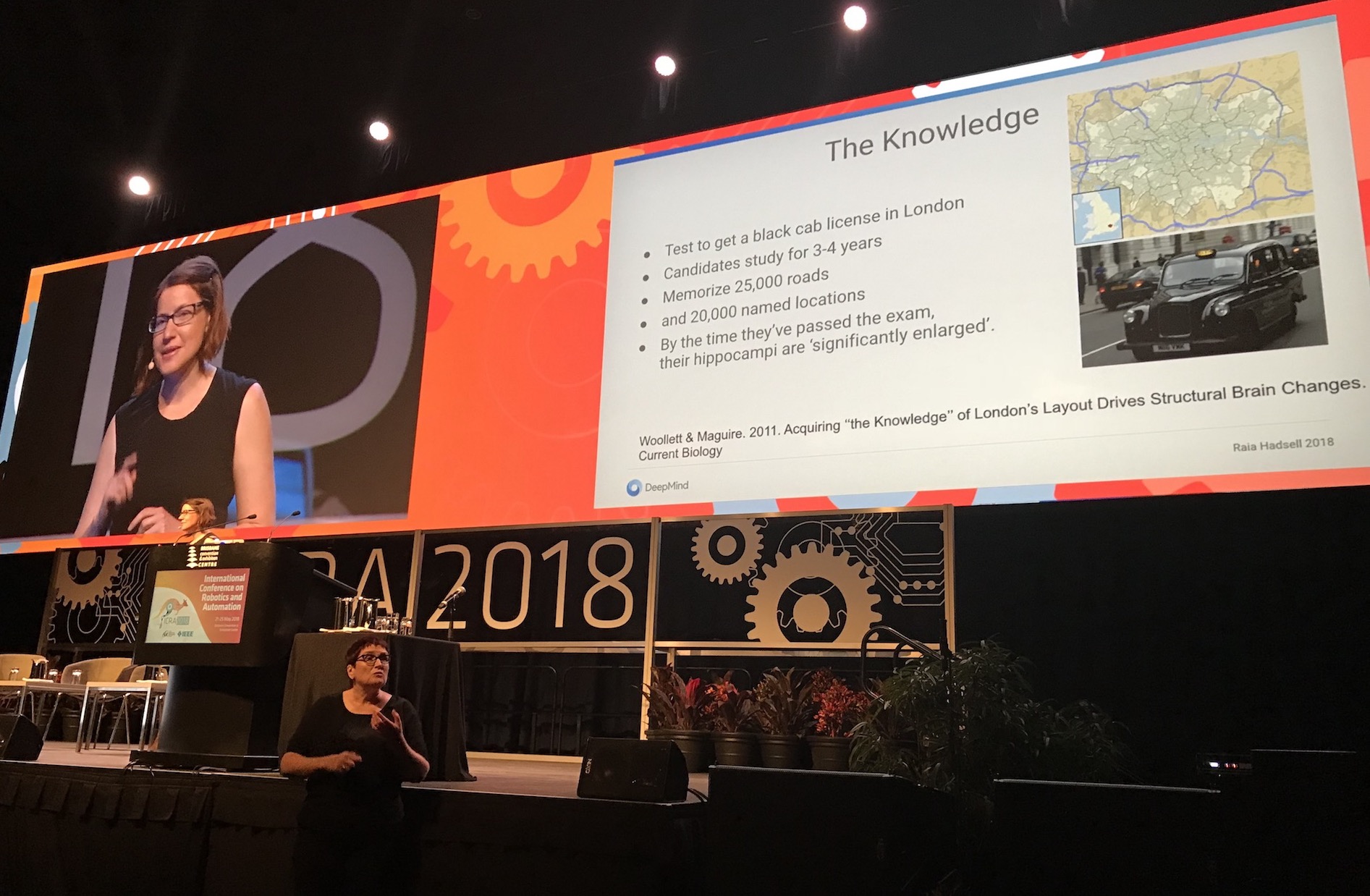 Her talk was about navigation, and in the picture above you see her mention London taxi drivers. I was aware of them after reading Peak, and it was a pleasure to see the example appear here. On the other hand, I’m not sure how much we will be needing taxi drivers with Uber and automated cars so … maybe it’s not good try and be a taxi driver nowadays, even in London?

Anyway, a lot of the talk was focused on the navigation parts, and the emphasis was on real-world driving because, as Hadsell admitted, many of the examples that DeepMind uses in their papers (particularly, the Labyrinth) are simulated.

After her talk, we had Pieter Abbeel’s keynote on Learning to Learn. It was similar to his other talks, with discussion on the RL^2 algorithm and his other meta-learning papers.

The standard poster session followed Abbeel’s keynote. The food for the morning was a “vegetable bun” (some starch with veggies inside) and cupcakes.

I didn’t mention this in my last post, but ICRA also contains some late-breaking results, which you can see in the poster session here: 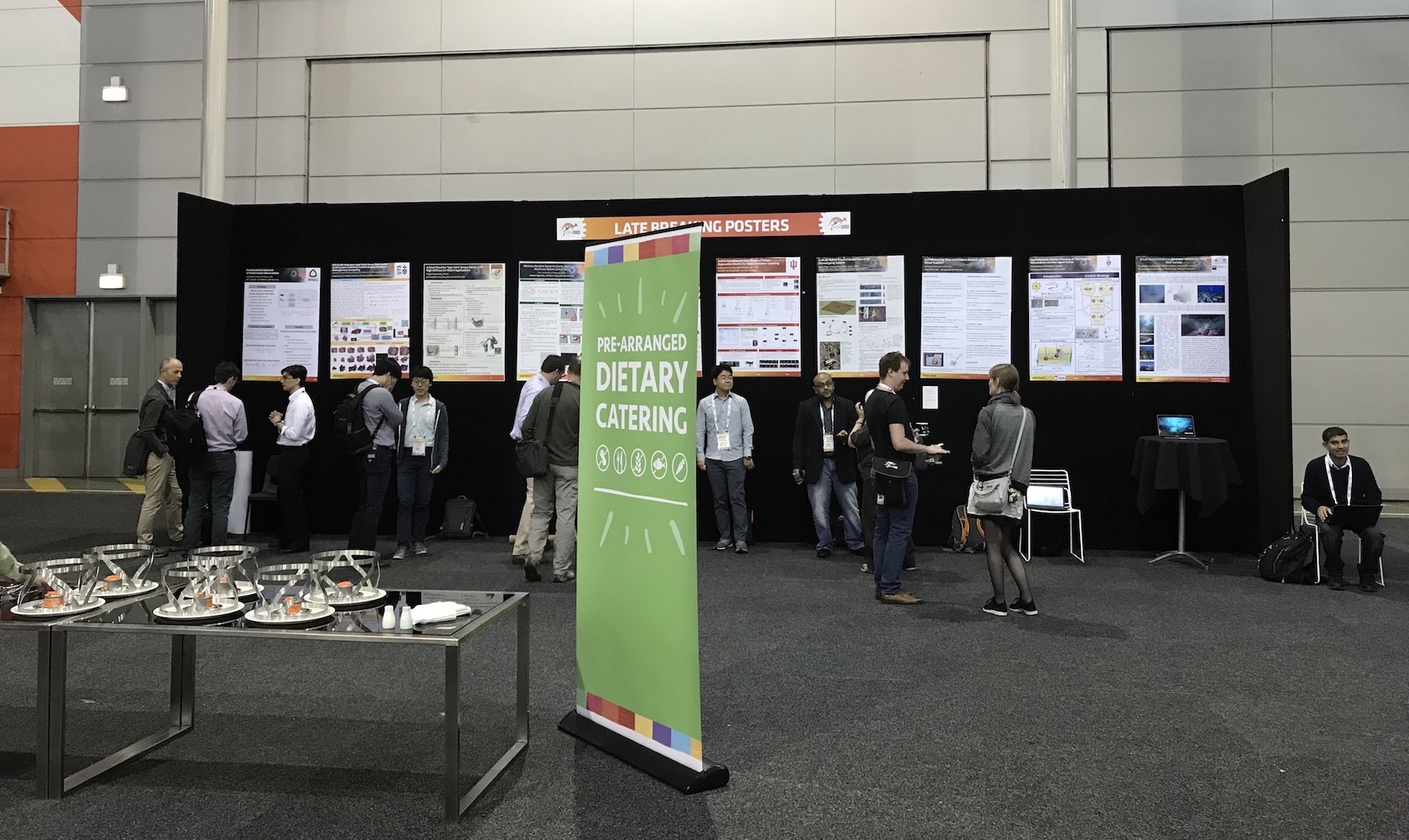 ICRA contains late-breaking results, which you can see here behind the pre-arranged dietary catering.

This is necessary because ICRA has such a long turnaround time compared to other computer science conferences. The deadline for papers is September 15, with decisions by January 15, and then the conference in May 21-25. By contrast, ICML, NIPS, and other conferences have far faster turnaround times, so it’s good for ICRA to allocate a little space for outstanding yet recent results.

We had lunch, an afternoon keynote, another poster session, and so forth. I found a Berkeley student who I had been wanting to talk to for a while, so that was good. Other than that, I spent most of my time walking around, taking pictures of interesting posters (but not really talking to anyone) and then I sat down in a resting area and did some blogging.

Soon, the social highlight of the day would occur: the conference-sponsored, cocktail-style dinner. (Well, actually, there were two dinners, this one and a “Global Entrepreneurs” dinner held at the same time slot, but for the latter you had to pay extra, and I’m guessing most conference attendees opted for the dinner I went to.)

The conference dinner was at the Queensland Gallery of Modern Art, built just a few blocks away from the conference venue. I didn’t know what a “cocktail-style dinner” meant, so I was initially worried that the event was going to be a sit-down dinner with lots of tables, and that I would be sitting by myself or with some random strangers with foreign accents.

My concerns were alleviated by seeing all the open space by the entrance: 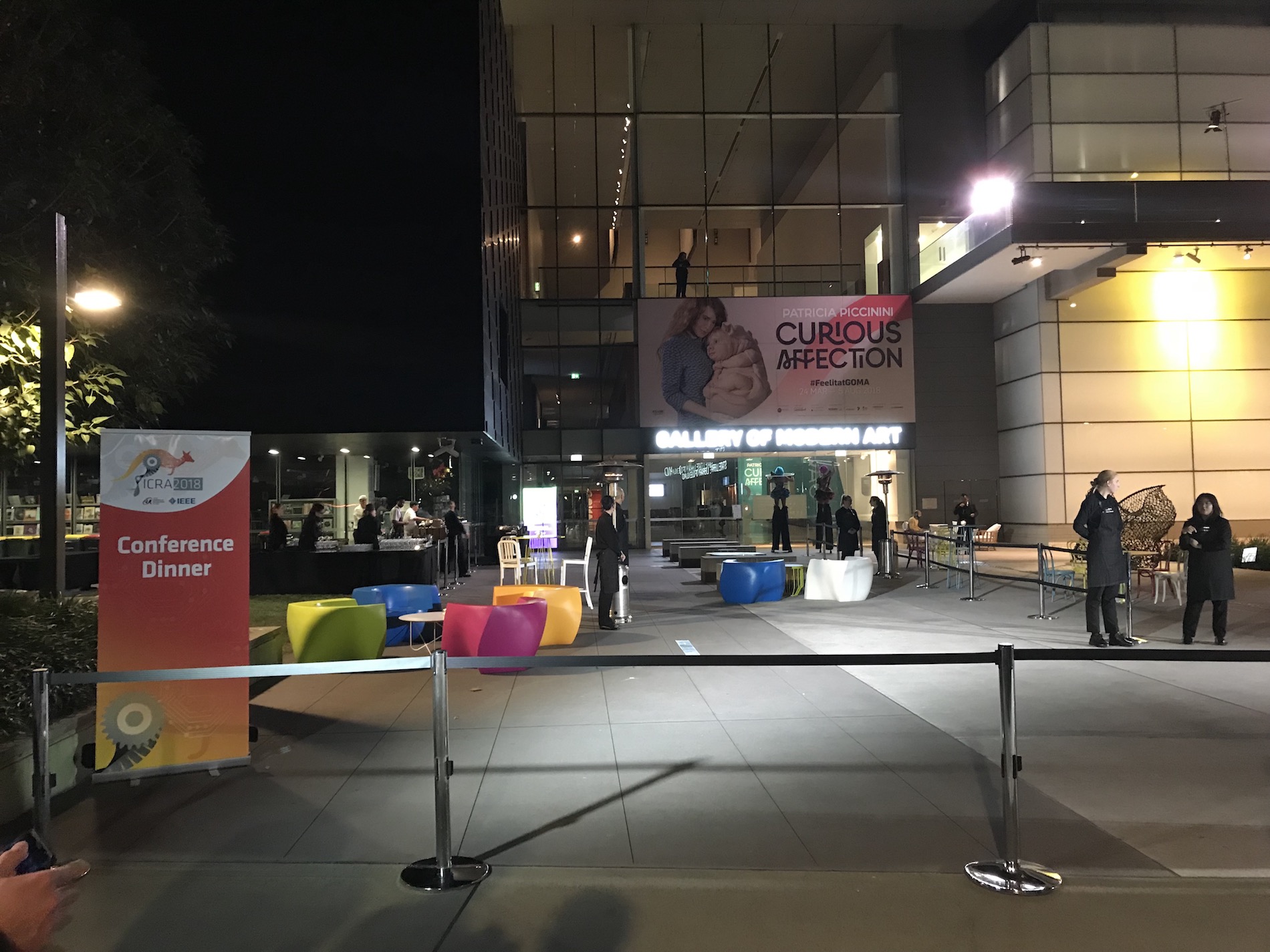 The start of the dinner, before we were allowed inside.

I like cocktail-style dinners since it means I can move around quickly in case I get bored or trapped in a conversation with someone who I can’t understand — it’s best to cut ties and walk away politely if it’s clear that communication will not work out.

Here was what the crowd looked like at dinner. These are pictures of the outside areas, but there was also considerable space inside the building. 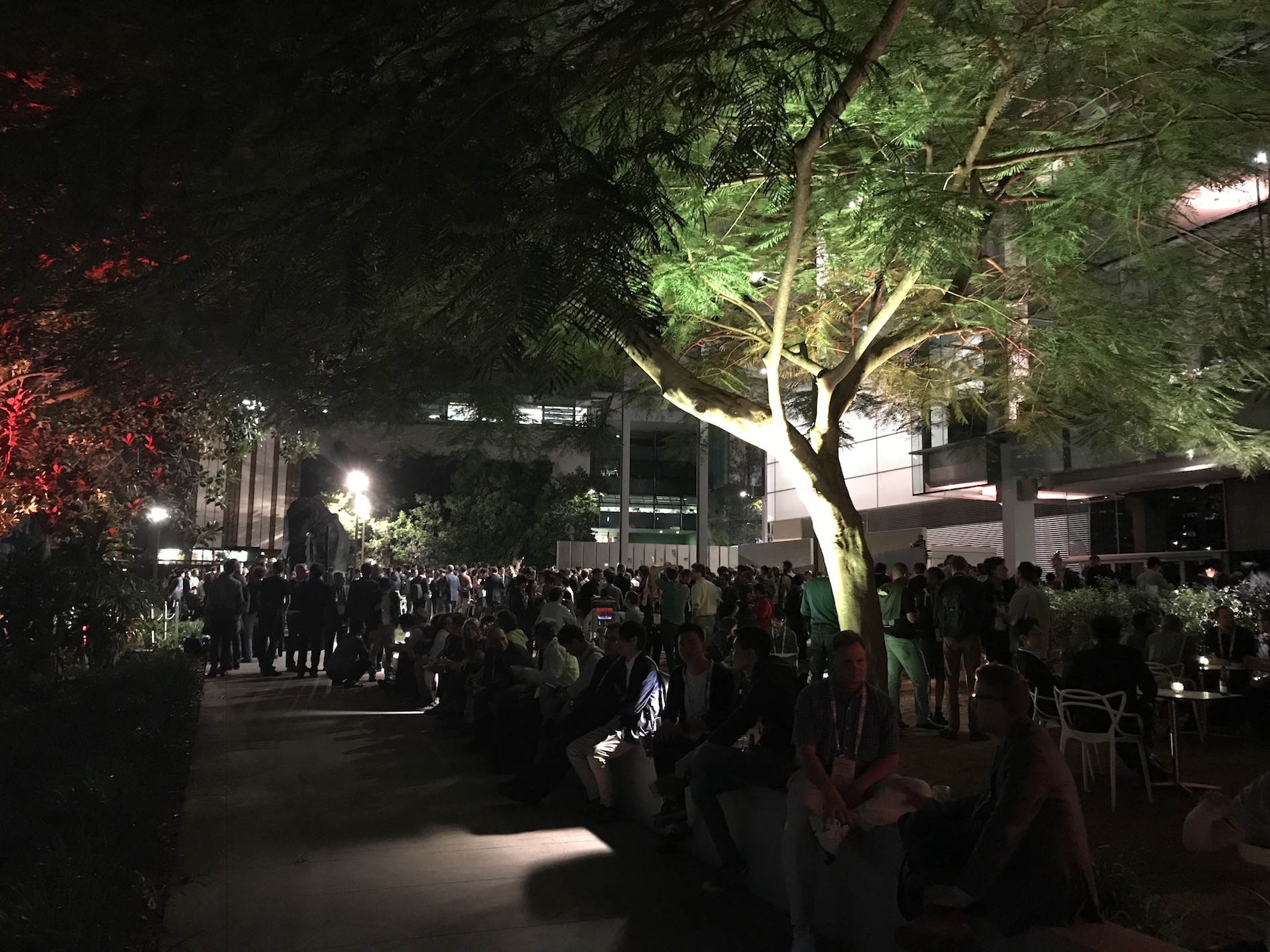 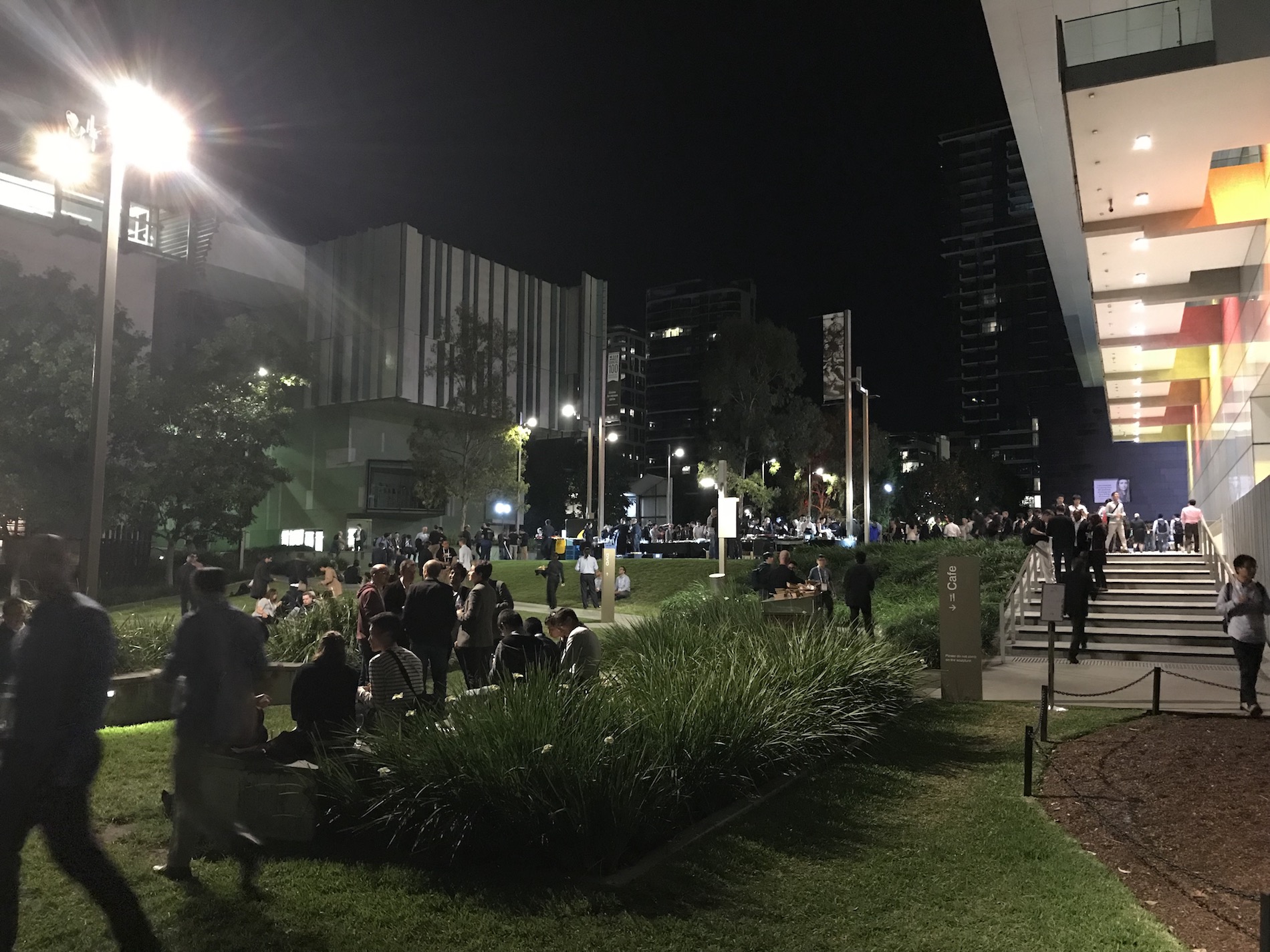 The lines were very long, and that’s probably my only criticism for the night. There were a few staff members who walked out with food for us to pick, and I think we needed more of those. The long lines notwithstanding, the food and drinks were really good, so I don’t want to take too much away from the event — it was far more impressive than what I had imagined for a conference dinner.

I would also be remiss if I didn’t mention that there was some impressive art in the museum. (No food and drink allowed in these areas!) 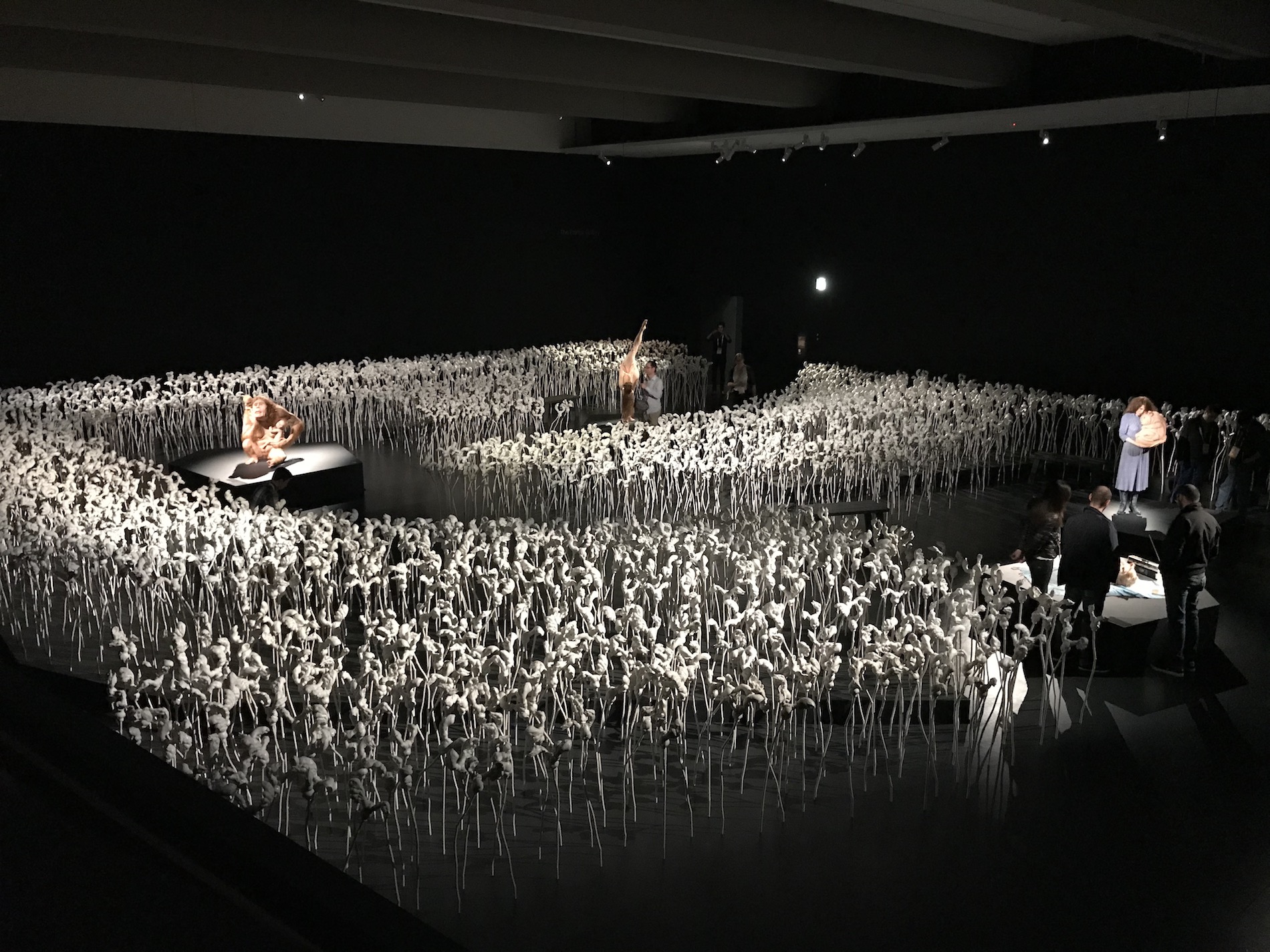 There was some nice art!

I stayed for an hour and a half and then headed back to my hotel room.