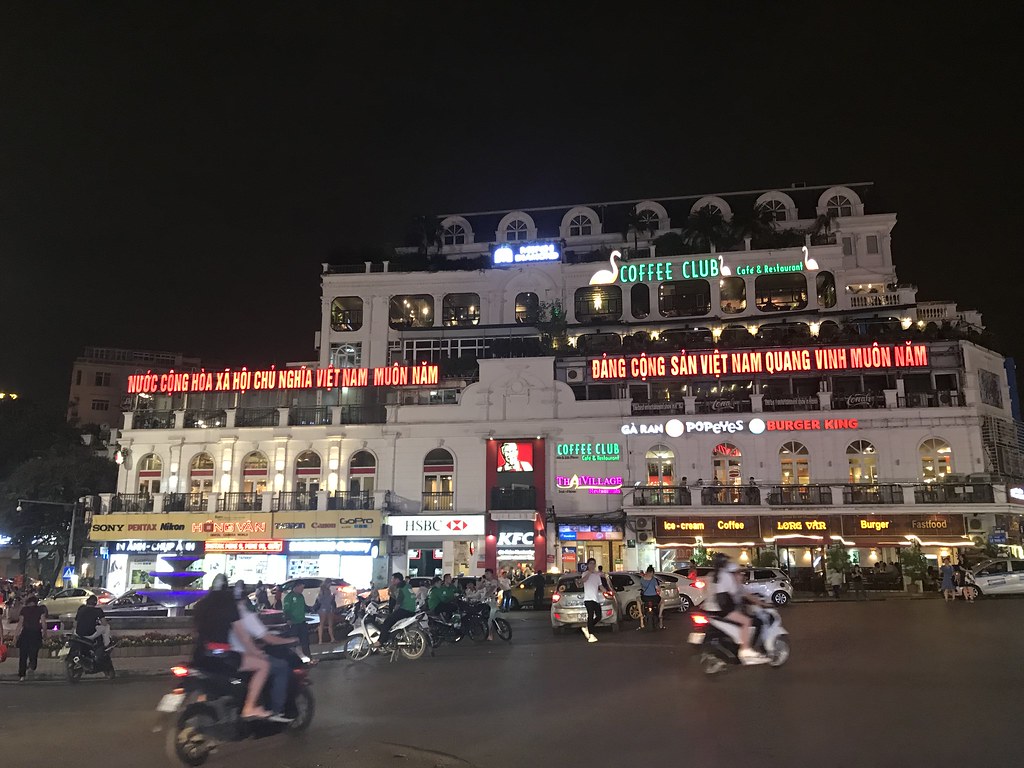 A view of Hanoi's bulidings and restaurants at night, after the second day of ISRR 2019.

Before going to the conference room, I ate an amazing breakfast at the hotel’s buffet, which was on par with the breakfast from the Sydney hotel I was at for UAI 2017. I always face a dilemma for these cases as to when I should make yet another trip to get a new serving of fresh food. I voraciously ate the exotic fruits, such as dragon fruit and the super ripe, Vietnam-style mangoes, which are different from the mangoes I eat in Berkeley, California. Berries are the main fruits that I eat on a regular basis, but I put that on hold while I was here. I also picked up copies of an English-language newspaper about Vietnam, and would read those every morning during my stay.

After breakfast, I went to the main ISRR conference room at the hotel. I was 30 minutes early and among the first in the room, but that was because (a) I wanted to get a seating spot at the front, and (b) I needed to test my remote captioning system. I wanted to test the system with a person from Berkeley, where it was evening at the time. For this, I put a microphone at the table where the speakers would present, and set up my iPad to wirelessly connect to it. I next logged into a “meeting group” via an app on my iPad, and the captions would appear on a separate website URL on my iPad. After a few minutes, we agreed that it was ready.

Oussama Khatib, of Stanford University, started off the conference with a 30-minute talk about his research. I am aware of some of his work and was able to follow the slides reasonably well. The captioners immediately told me they had trouble with his accent. I was curious where Khatib was from, so I looked him up. He was raised in Aleppo, Syria, the city made famous by its recent destruction and warfare.

I see. A Stanford Professor was able to emerge from Aleppo in the 1950s and 1960s. I don’t know how this could happen today, and it’s sad when the government of Syria ruins opportunities for its own citizens to become renowned world leaders. It is completely unacceptable that Bashar al-Assad is still in power. I know this phrase has gotten politically unpalatable in some circles, but regime change must happen in Syria.

Some of the subsequent talks were easier for the captioners to understand. Unfortunately we ran into a few more technical issues (not counting the “accent” one), such as:

Technical difficulties are the main downside of remote captioning systems, and have happened every time I use remote captioning. I am not sure why there isn’t some kind of checklist for addressing common cases.

Anyway, ISRR 2019 has three main conference days, each of which consist of a series of 30-minute faculty talks, and two sets of 10 talks corresponding to accepted research papers. (Each paper talk is just 5 minutes.) After each set of 10 talks, we had “interactive sessions,” which are similar to poster sessions. There were six of these sessions, and hence 6 times 10 means there were 60 papers total at ISRR 2019. It’s a lot smaller than ICRA!

ISRR also has a notable “bimodal” age distribution of its attendees. Most of the paper presenters were young graduate students, and most of the faculty were senior. There was a notable lack of younger faculty. Also, of the 100-150 attendees that were there, my guess is that the gender distribution was roughly 15% female, 85% male. The racial composition was probably 50% White, 40% Asian, and 10% “Other”.

I couldn’t get the remote captioning working on the interactive sessions — there was a “pin” I was supposed to use, but it was not turning on no matter what I tried — so I mostly walked around and observed the posters. I also ate a lot of the great food at the interactive sessions, including more dragon fruit. The lunch after that was similarly scrumptious. Naturally, it was a buffet. ISRR definitely doesn’t shy back at providing high quality food!

For talks, the highlight of the day was, as expected, Prof. Ken Goldberg’s keynote talk. Ken gave one that was of a slightly different style compared to the other faculty talks; his weaved together his interests in art, philosophy, agriculture, robotics, and AI ethics.

Our lab also presented a paper that day on area contact models for grasping; Michael Danielczuk presented this work. I don’t know too much about the technical details, unfortunately. It seems like the kind of paper that Ken Goldberg and John Canny might have collaborated on if they were graduate students.

The conference did not provide dinner that night, but fortunately, a group of about 24 students gathered at the hotel lobby, and someone found a Vietnamese restaurant that was able to accommodate all of us. Truth be told, I was too full from all the food the conference provided, so I just ordered a small pork spring roll dish. It was piping hot that night, and the restaurant did not have adequate air conditioning, so I was feeling the heat. After we ate, I went and wandered around the lake near the hotel, snapping pictures with my phone. I wanted to make the most of my experience here.