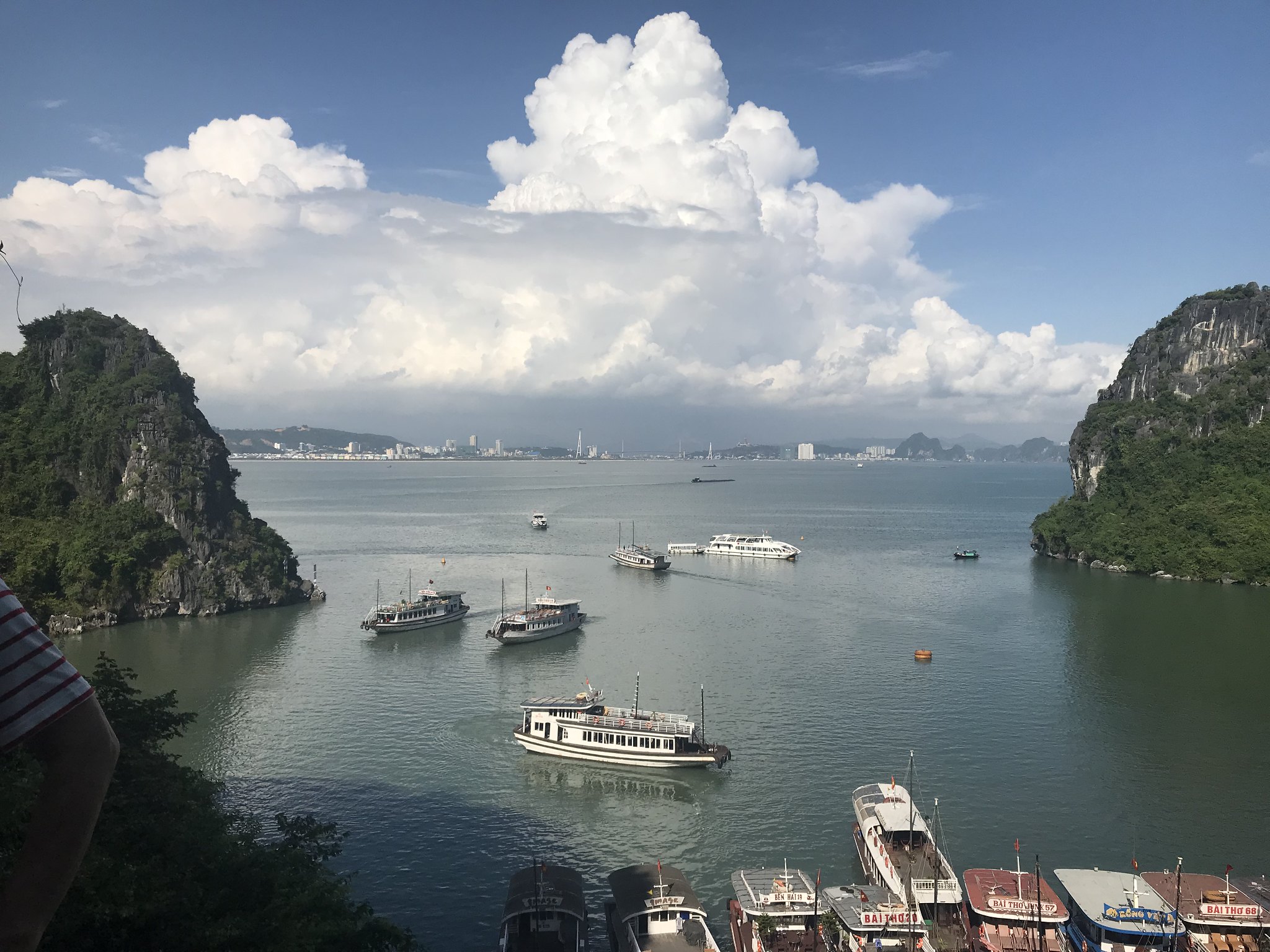 A photo I took of our trip to Halong Bay. This was after our bus ride and cruise, which brought us to a cave. The Halong Bay resort is in the background.

On October 10, the last official day of ISRR 2019, we had a day-long excursion to Halong Bay. I did not request remote captioning for this day because I do not know how it could possibly work for an outdoor drive and cruise with no WiFi, and I would rather be taking pictures with my phone than reading my iPad in detail.

We had a two-hour bus ride from the hotel in Hanoi to Halong Bay. I sat near the front and was able to understand the words our tour guide was saying. He was an amusing and engaging local who spoke fluent English. He gave a 15-minute history of Vietnam and commented on the wars with France (1946 to 1954) and America (1964 to 1975).

After his historical account, our tour guide said we were free to ask him questions. I immediately asked him how Vietnamese think of United States President Donald Trump.

He replied with a mix of both amusement and puzzlement: “Donald Trump is very … uh … strange. He’s like … uh … an actor. He’s … very different from other leaders.”

I do not disagree with his assessment! He said that when Trump and Kim visited the hotel we were at for their nuclear “summit,” local Vietnamese were all clamoring to get a view of the two leaders. He then concluded his answer to my question by saying that Vietnamese are not very political. Uh oh, I thought, though I did not press him on the issue. (I did not bring this up to avoid being a distraction, but my main concern over lack of political interest is if people will not fight to maintain the rights of themselves or their fellow citizens.)

Near the end of the bus ride, we had a quick stop at a jewelry store, where some conference attendees bought jewelry for their spouses. The quality of the jewelry looked great, but I’m obviously not an expert. The prices varied considerably, and I think the most expensive single piece of jewelry I saw on sale was 14,500 USD. Wow!

Shortly after our stop at the jewelry store, we finally arrived at the Halong Bay report. The area we went to seemed like a tourist destination, with lots of tall and nice-looking buildings compared to downtown Hanoi. I also noticed upon a closer look, however, that while the outsides of the buildings looked great, the insides looked like they were run down or under construction — it honestly felt slightly creepy. I also didn’t see a lot of tourists other than our group. I am not sure what the plan is regarding Halong Bay, but I hope these buildings are under construction rather than abandoned.

The tour guides split us into several groups, and each group went on a small cruise ship. On the ship, we ate a Vietnamese lunch, which included some similar dishes we had earlier at the conference, such as prawns and squid. Those two dishes are really popular in Vietnam! It is a lot different from my seafood diet in America, which I associate with “Salmon” or “Halibut.” We took a 30-minute tour of a cave, and then went back on our boats to return to the buses to Hanoi.

At Hanoi, I joined a few other students for dinner at the same place Barack Obama famously ate when he visited Vietnam. Unsurprisingly, the restaurant is filled with pictures of Obama and even has a menu item named “Combo Obama,” representing what he ate. I imagine that most people in Vietnam can recognize Obama in photos and know about him.

On the following day, October 11, I performed some final sight-seeing of Hanoi, and finally got to try out their famous coconut coffee, which blends coconut and black coffee. It was delicious, and I sipped it while sitting down in a tiny chair at the cafe where I purchased it, and used my Google Translate app to thank the employees there.

I also toured the Vietnamese Museum of National History. Most of the exhibits concerned Vietnam’s fights against foreign invaders, most notably the French and then (obviously) the Americans. After I spent an hour walking through the museum, I thought in awe about Vietnam’s transformation from war-torn territory to a rapidly developing country. Given all the diplomatic difficulties the United States has with countries such as Russia, China, North Korea, Iran, and Syria, the improved US-Vietnam relations give me hope that one day we can consider these countries allies, rather than adversaries.

On my trip back, I had a long layover at Incheon, so I first napped for a few hours in the “nap area” and then went to the Skydeck lounge to catch up on email, administrative work, and obviously writing these blog posts. It cost me 48 USD to stay in the Skydeck Lounge for six hours, but I think it was mostly worth the price, and essentially anyone with a boarding pass (even economy passengers like me) can access it. It is not as good as the Asiana Business Class lounge, but it is good enough for me.

Once the time came, I boarded my flight back to San Francisco, to return to normal life.

If you’re interested, I have a photo album of my trip on Flickr, with almost 200 photos taken. As always, thanks for reading.