For the second day of UAI 2017 (August 12)1, I followed the same initial routine from the previous day. I woke up early, had a 4:30am gym session, ate a hearty breakfast at the hotel’s buffet, and then walked over to the conference venue. The talks were held in the room shown in the following image: 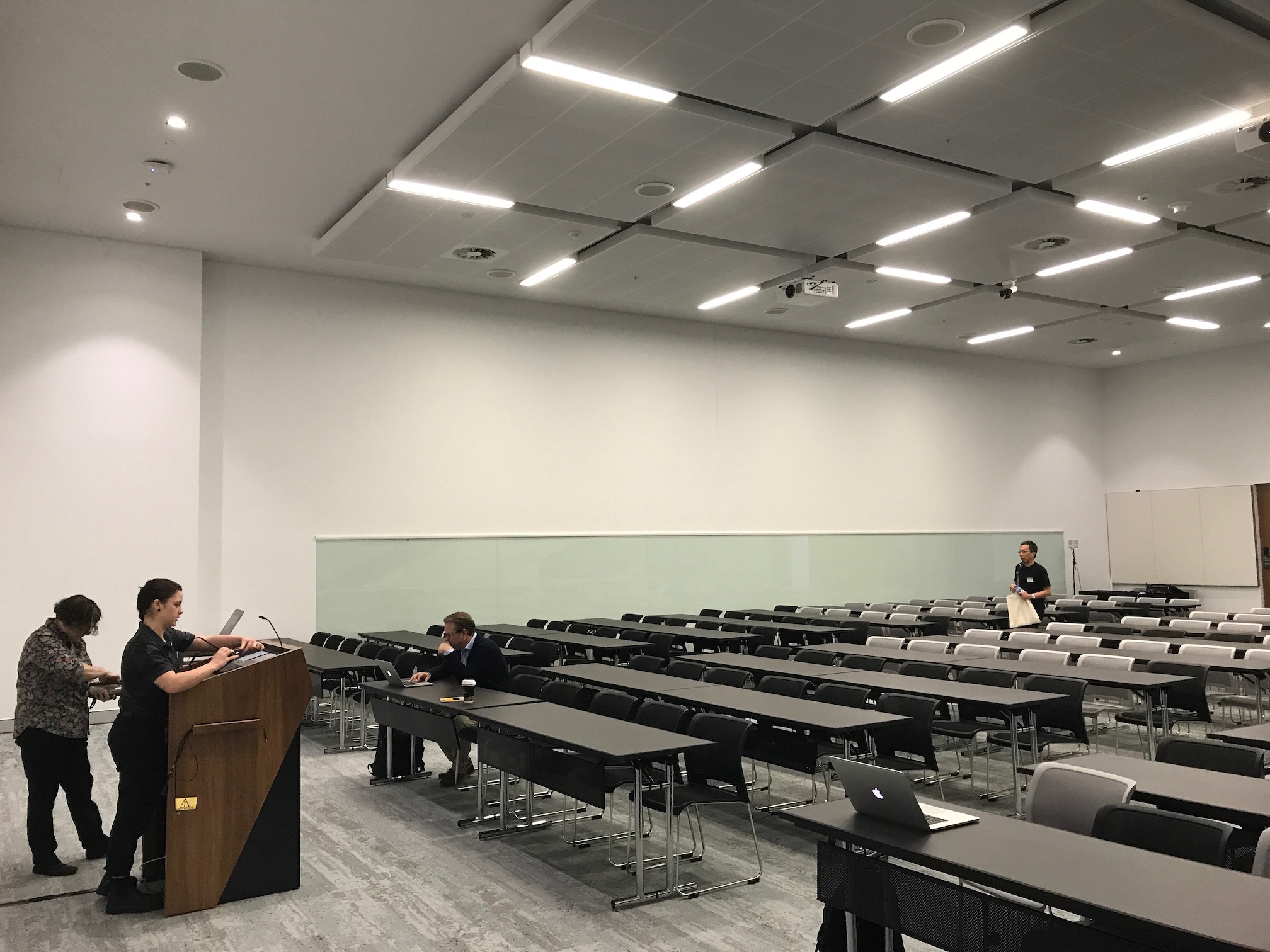 Yeah, it’s a fairly small room. Compare that to the room used for the ICML keynote talks, which is in the same building. Wow!

Fortunately, the second day of UAI started off better than the first one, since the captioner (a.k.a. “CART provider” or “stenographer”) arrived. Whew.

At around 8:30am, the day began with some opening remarks from one of the chairs. After that, it was time for MIT robotics professor Leslie Kaelbling’s one-hour keynote talk on Intelligent Robots in an Uncertain World. It was a nice, relatively high-level talk which centered on Partially Observable Markov Decision Processes (POMDPs) and belief states, with applications that focused on robotics. 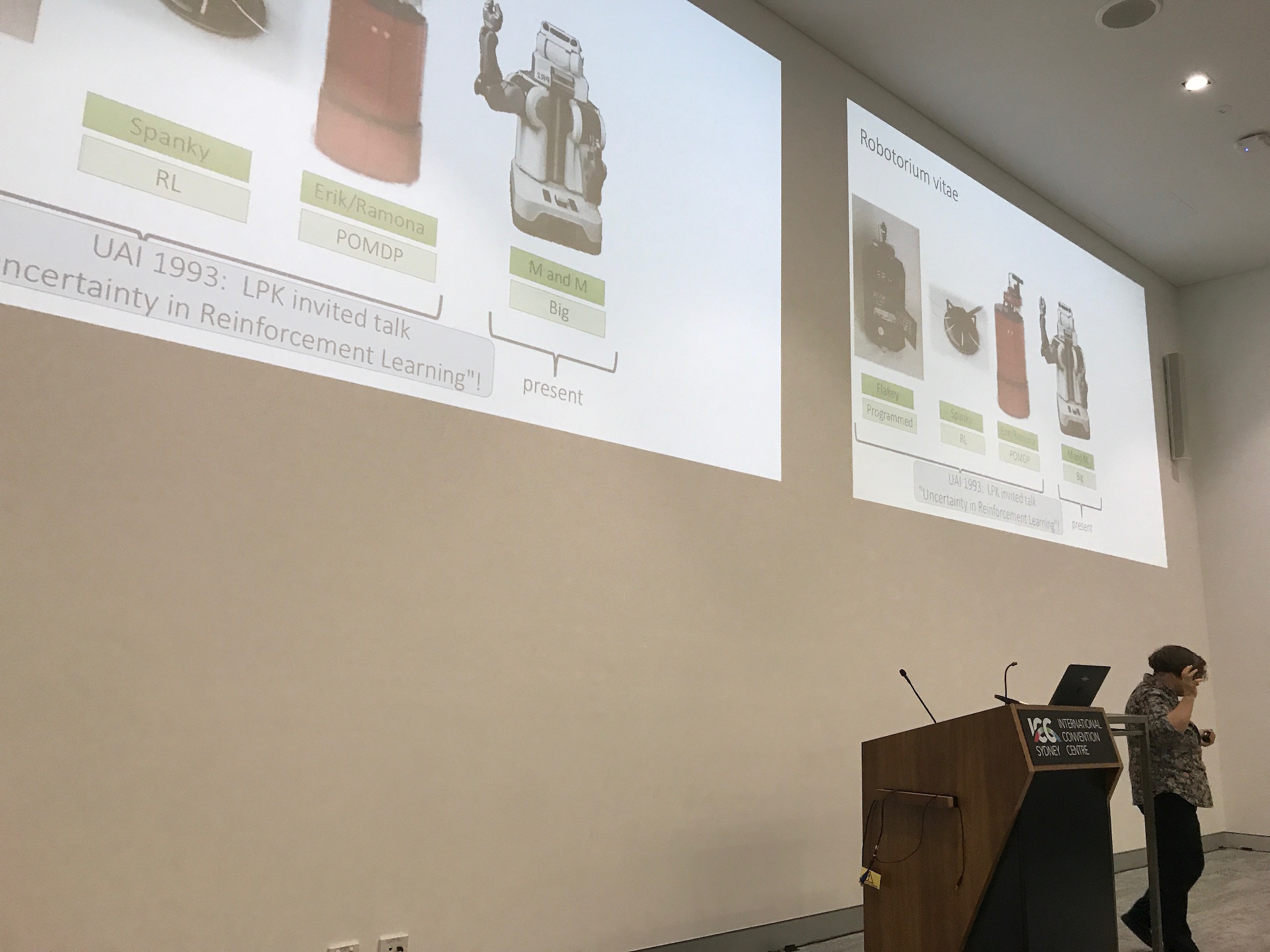 The experiments that she showed in the slides involved the PR2 robot, which I assume is one of the primary robots in her lab. I wish I could use the PR2 one of these days, or at least a robot similar to it.

The final part of her talk contained a request for the UAI community to figure out how to perform action selection in belief spaces. In other words, if we don’t know everything about the environment (which is always the case in real applications) we have to pick actions on the basis of what we believe about the world.

Overall, it was an excellent talk. There were a few sections that were relatively difficult for me to follow, but I’m not sure if it was because there was too much information to process in the slides (some of them had a lot!) or if it was because I had a hard time getting used to the captioning.

After the keynote talk, we had oral sessions. In these, authors of papers accepted to the conference give 20 minute talks. Not all the papers have oral talks, though; they’re reserved for those with the highest reviews. Also, typically the first author is the one who gives presentations.

Today, there were four oral sessions, each of which consisted of one broad research topic and three research papers in each (so each session was an hour long). The first oral session was about deep models. Yay! Ming Jin started off the oral sessions with his excellent talk on inverse reinforcement learning. 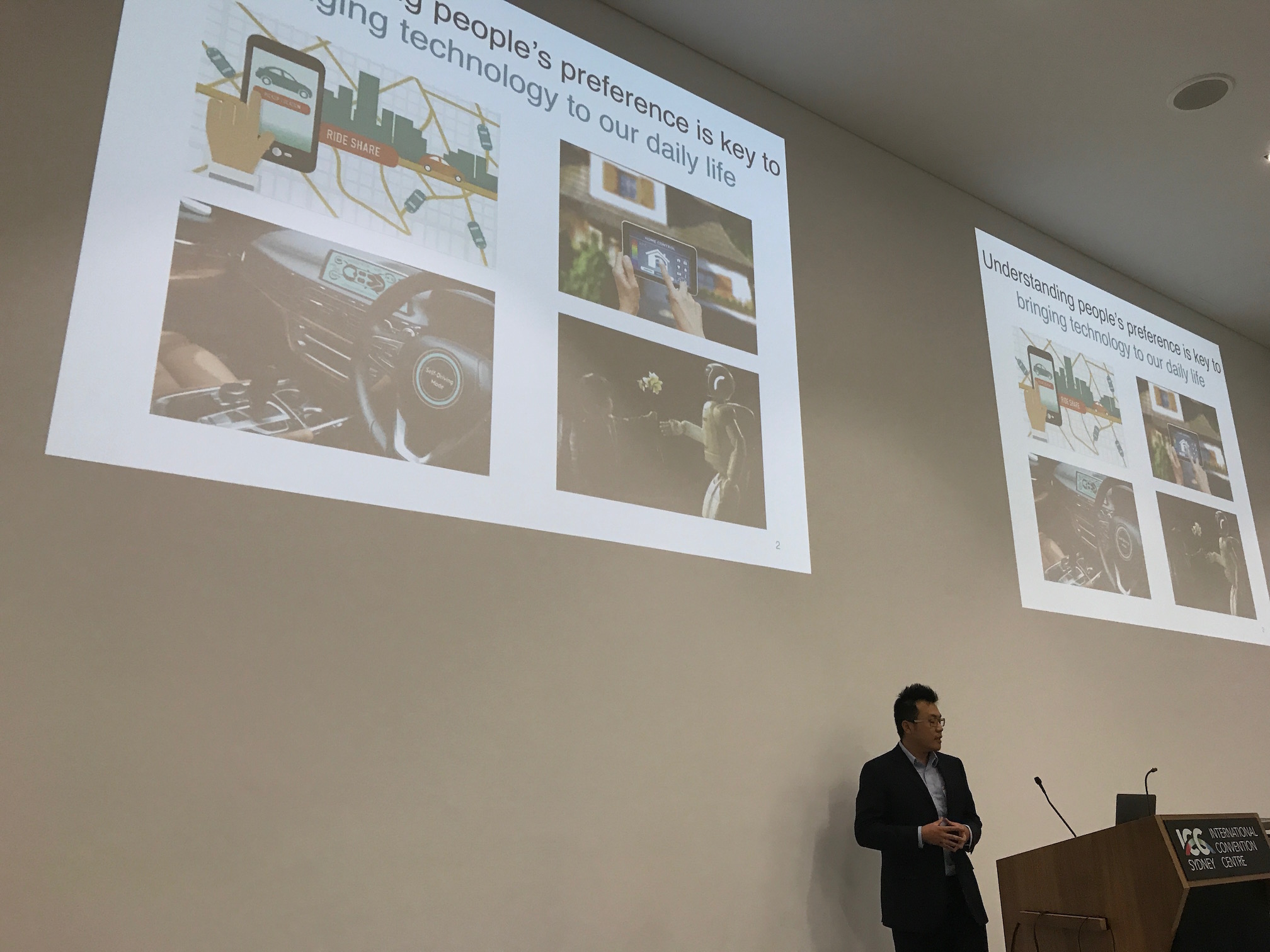 The two other talks for this oral session were also interesting and perhaps more related to core Deep Learning research.

The second oral session was on the subject of machine learning, which is probably not the best name for it, but whatever. Unfortunately, the papers were quite mathematical and the speakers were a little difficult to understand (the captioner had major difficulty) so it was hard for me to get much out of the talks beyond trying to extract every ounce of information from the slides that I could.

After a break for lunch — though I was simply too full from eating earlier and had to pass — we had our second keynote of the day, Expectations in Learning and Inference by Professor Amir Globerson of Tel Aviv University. 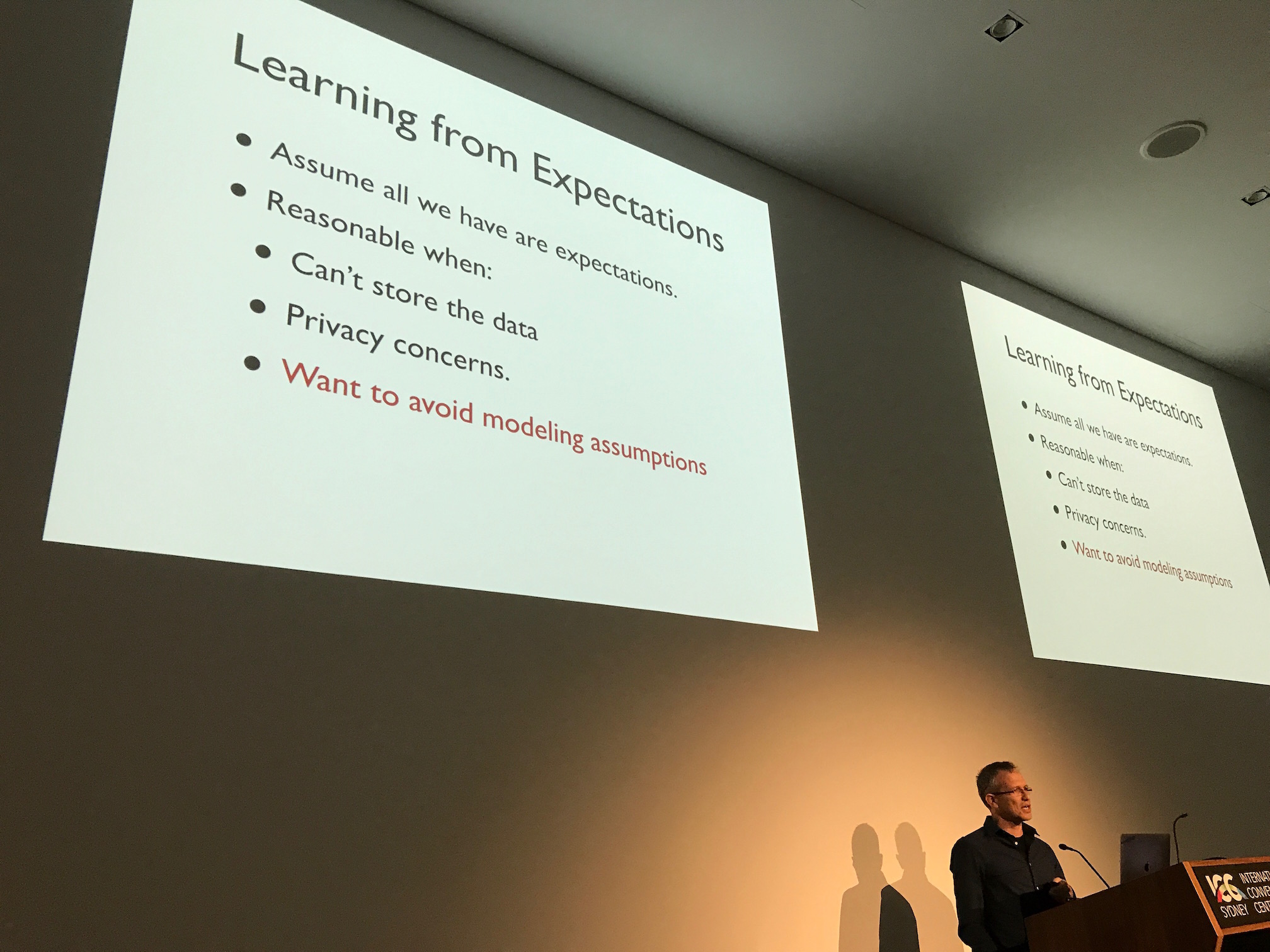 The second keynote talk of the day.

This talk was more about math, in particular about expectations and probabilities. What happens when we aren’t given data but are given the expected value? What can we determine from it? (See the slide above for the related context.) The technical contribution was probably the development of bounds for not probabilities, but the minimum of probabilities over a certain class (if that makes sense?). I unfortunately had a harder time understanding this talk compared to the first keynote. I thought I could follow slide by slide and sentence by sentence in the captions when I saw the transcripts, but I couldn’t piece together a good story. Maybe this has happened to other people?

In any case, for me I long ago decided that for research talks, I don’t try to understand everything but instead, I find any interesting points and then follow-up on these later, either by emailing the author or (more likely) simply searching online. Google has been great for people like me.

We had two more oral presentations after this second keynote. In between the two, I had an entertaining conversation with another student from the University of Helsinski who told me that hearing aids should have some way of blocking out background noise. I told him that, sadly, they’re already supposed to do that, though he didn’t give up and said that we should use machine learning to make them block out noise. Yeah, that would be great. 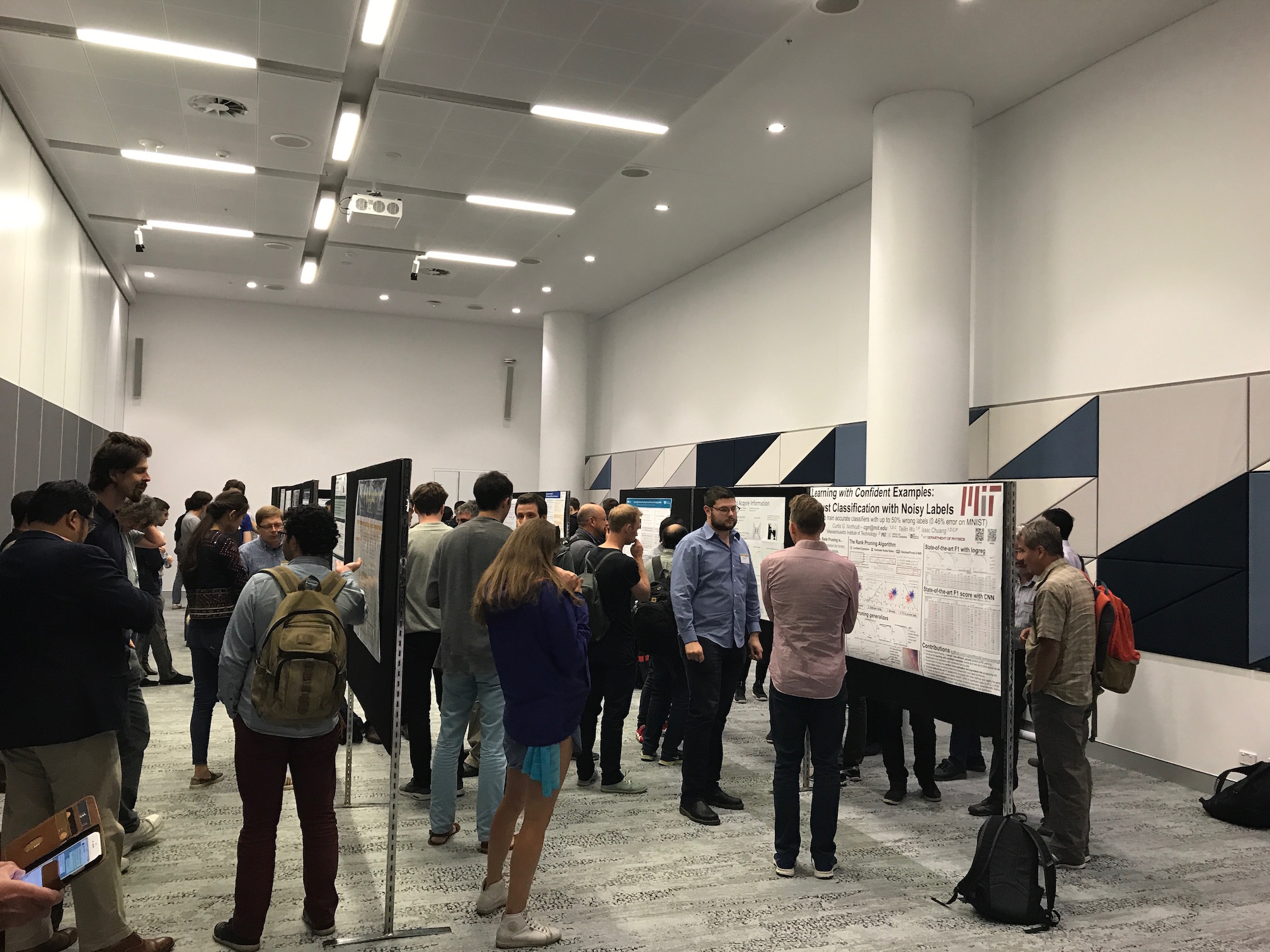 The poster session for today.

We wrapped up the day with a poster session which featured roughly one-third of the UAI 2017 papers. (There are also poster sessions in day three and day four of the conference.)

After this, I went to the nearby mall and found a quick, cheap Middle Eastern restaurant for dinner. I ate by myself as I didn’t know anyone else, and I couldn’t find any lonely person who I could pounce on with an invitation, but that was OK with me. I just wanted to see what the city had to offer, and I’m pleased to say that I was not disappointed. Darling Harbor has a ridiculous ton of awesome restaurants. It’s food paradise for someone like me. 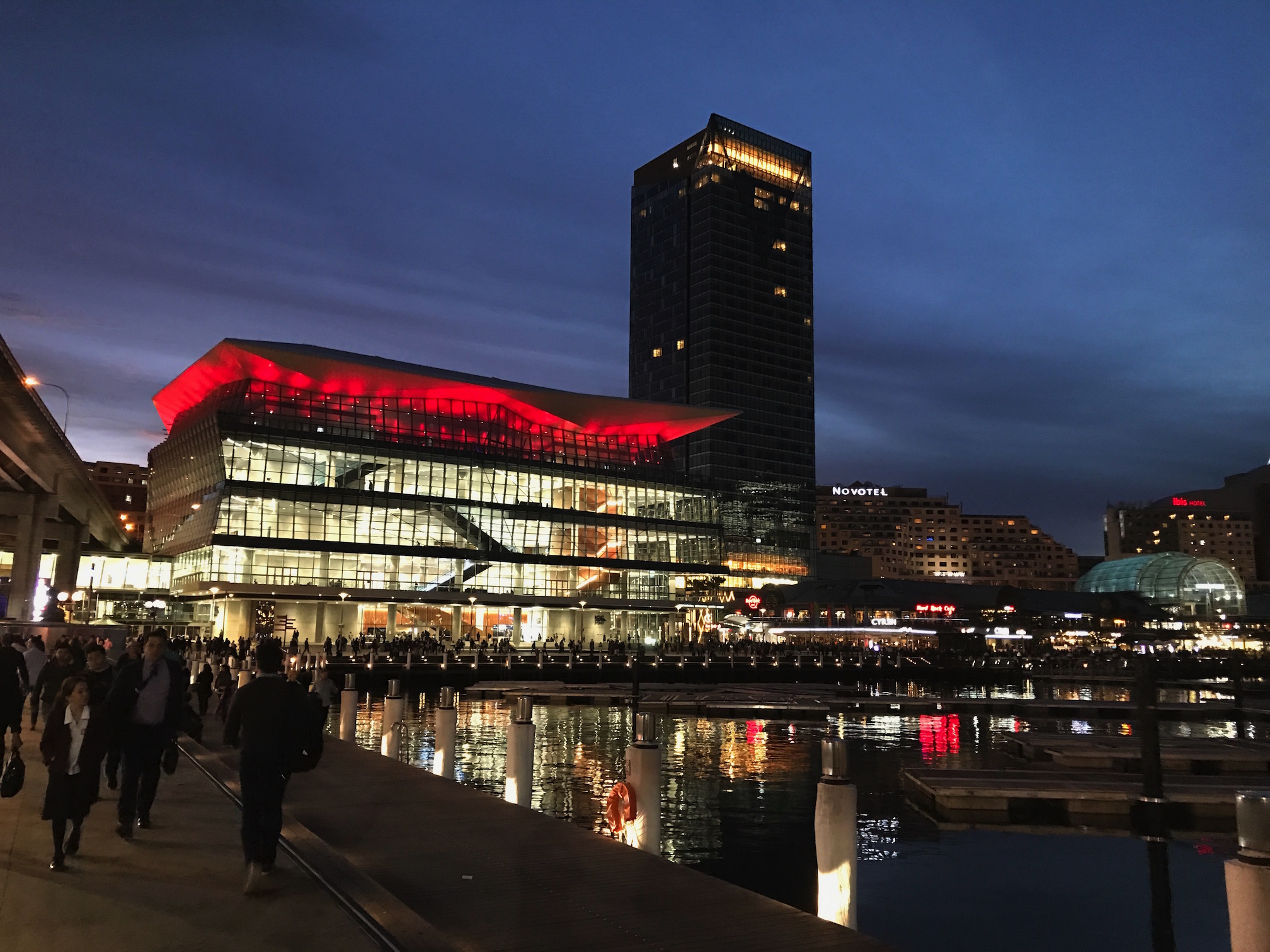 The view of the lovely harbor at night. The conference is in the large building located at the center-left with the lights on. To its right is a giant mall (which the photo doesn't entirely reveal) with a LOT of stores and restaurants. Wow.