The third day of UAI 2017 (August 13) started off with Stanford Professor Christopher Ré giving the first keynote talk of the day about his group’s project called Snorkel. Chris is epitome of a “rock-star academic,” and he has a ridiculous amount of publications in the last few years. His lengthy list of awards includes the well-known MacArthur “Genius” Fellowship. 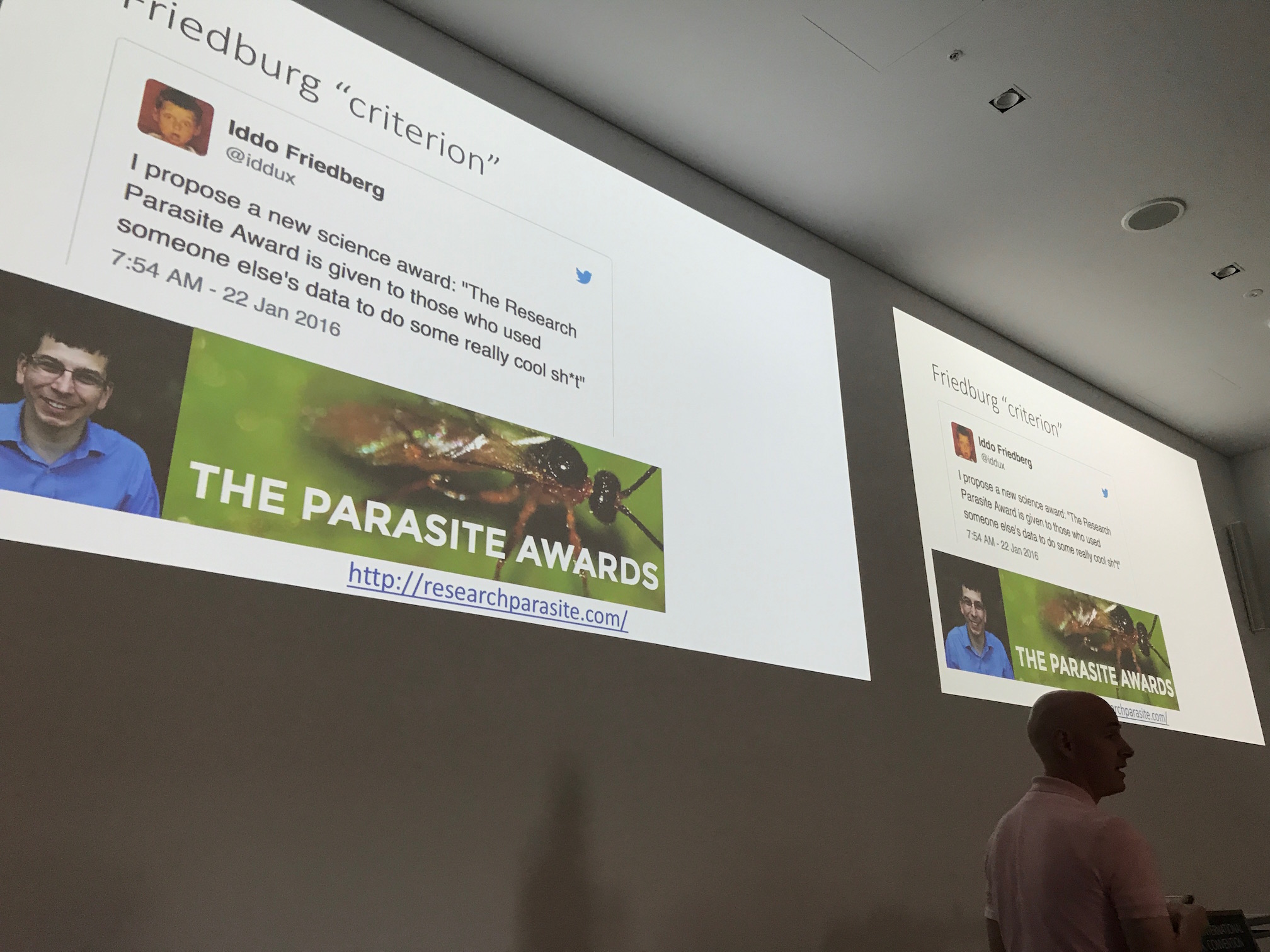 I really enjoyed Professor Ré’s talk, both for the content and for the “style” (i.e. at the right technical level, good visuals, etc.). He inserted some humor now and then, as you can see in the slide above. Anyone want to win the parasite award? Heh. I also try to include humor in my talks.

Anyway, as I mentioned earlier, the main technical part of the talk was about Snorkel. It’s an important project, because it helps us deal with “dark” or unlabeled data, which is what the vast majority of data will look like in real life. How can we make sense of dark data, and “clean it up” to make it more useful? This is critical because, as Professor Ré said in the talk:

I was amusingly reminded of Andrew Ng’s famous (or infamous, depending on your opinion) phrase:

AI is the new electricity.

In case you are curious, I agree with both of the above quotes.

You can find more information about Snorkel on the project website. What’s great is that there are also lots of blog posts. His group really likes to write blog posts! At least I have something in common with them.

The first oral session was about “Representations”, a research sub-field which I am unfortunately not familiar with, and so I had an extremely hard time following the material. I tried to gather pieces of what I could and recorded anything interesting in my ongoing Google Doc containing my notes from UAI 2017. As I stated in my last blog post, I do not try to follow talks in their entirety — I couldn’t do that even if I wanted to — but I record bits and pieces of intriguing stuff which are candidates for future investigation.

During breaks, I worked on outlining these blog posts; I drafted them in Google Docs.

The second oral session was about … reinforcement learning! Awesome. At least I should have more background information for this material. Of the four papers presented, the fourth one seemed to have the most interesting material in it. The UAI organizers must have agreed, because the authors (Shayan Doroudi along with Philip Thomas and Emma Brunskill) won the UAI 2017 Best Paper Award for the paper “Importance Sampling for Fair Policy Selection.”

Fairness is becoming a recurring theme in research and academia nowadays along with safety and (as you’ll see later) health care. The talk was excellent since Shayan has good speaking skills. He motivated the problem with a quick example of choosing between two policies, one of which was obviously better than the other. Despite the apparent simplicity of choosing the policies, importance sampling approaches can actually choose the worse policy more often than not. 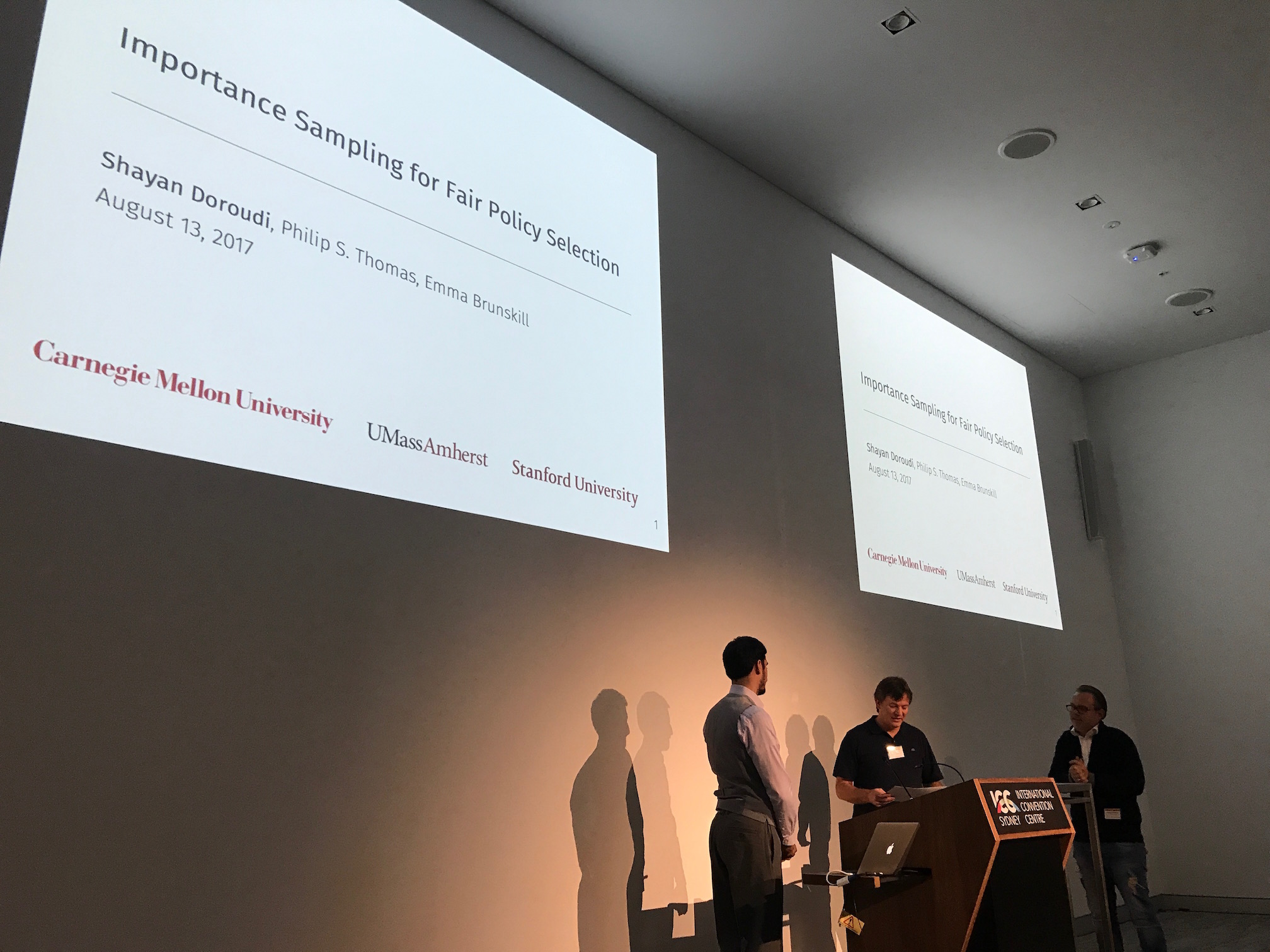 Shayan Doroudi (to the left) being presented with the UAI 2017 Best Paper Award by the conference chairs. Congratulations!

We now have the following award-winning reinforcement learning papers:

At some point, I’d like to grind through the details in these papers. I know the high level idea of each of these but aside from perhaps the dueling networks paper, the details elude me.

After a brief lunch break with another student from India — whom I found standing alone and thus it made sense for us to go to lunch together — we had our second keynote talk. Duke Professor Katherine Heller gave a talk about machine learning in health care. Gee, is anyone seeing a trend with machine learning applications? 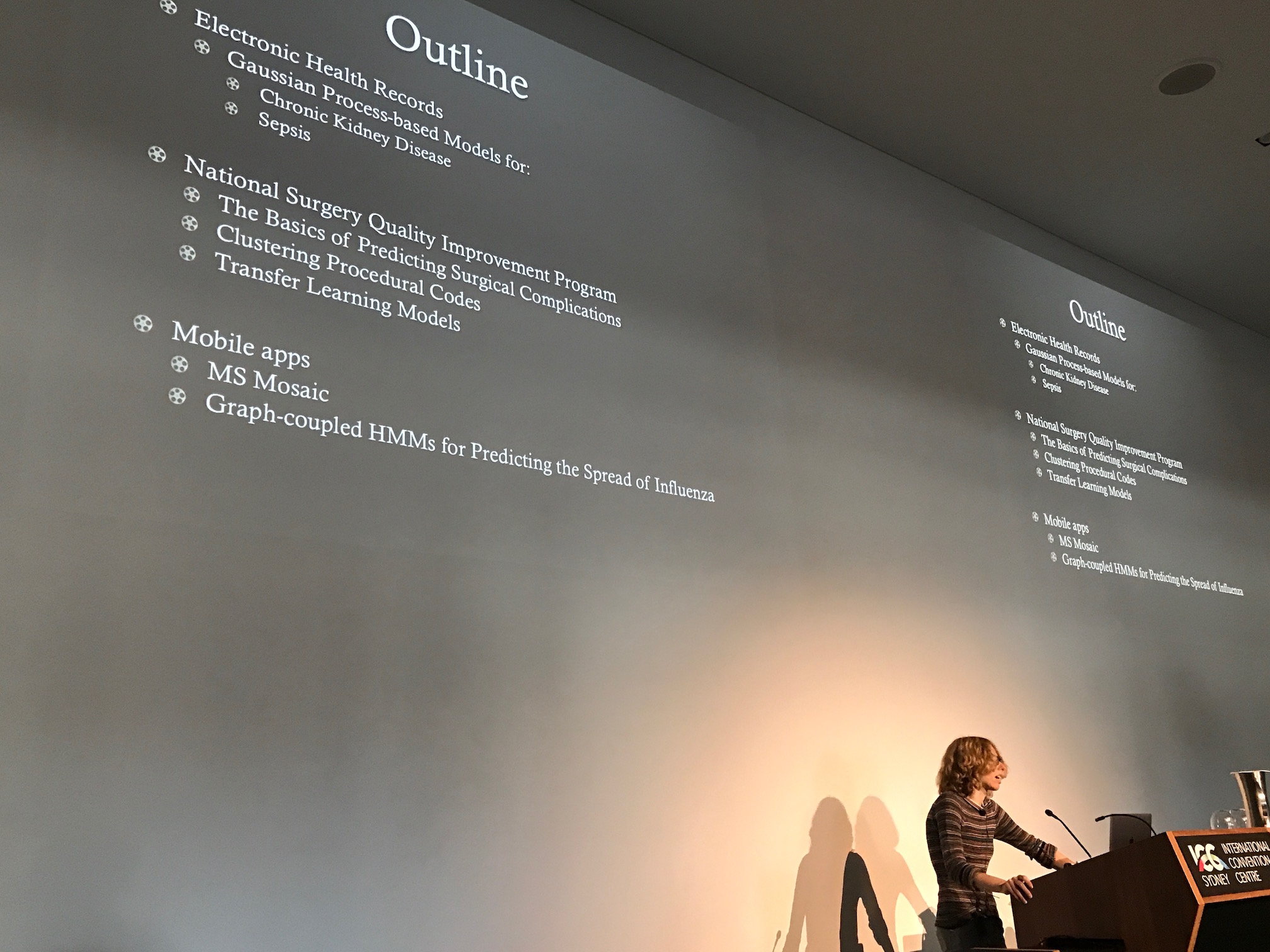 Katherine Heller gives the second keynote talk of the day.

You can see the outline of her talk in my picture above. I remember that she discussed the following topics:

Given that much of the talk was about, I believe, modeling health care, I sometimes wonder how accurate our models are. The United States has one of the most inefficient health care systems in the developed world, and I wish we could use some machine learning to cut away at the inefficiency.

After Professor Heller’s talk, we had the usual poster session. I managed to engage in a few interesting one-on-one conversations, which is good enough for me!

We then had a special event provided by the conference: a dinner cruise along Darling Harbor. Awesome! The buffet options included a wide range of food options: prawns, Indian chicken curry, Thai fish curry, pastas, potatoes, and of course, lots of salad options. 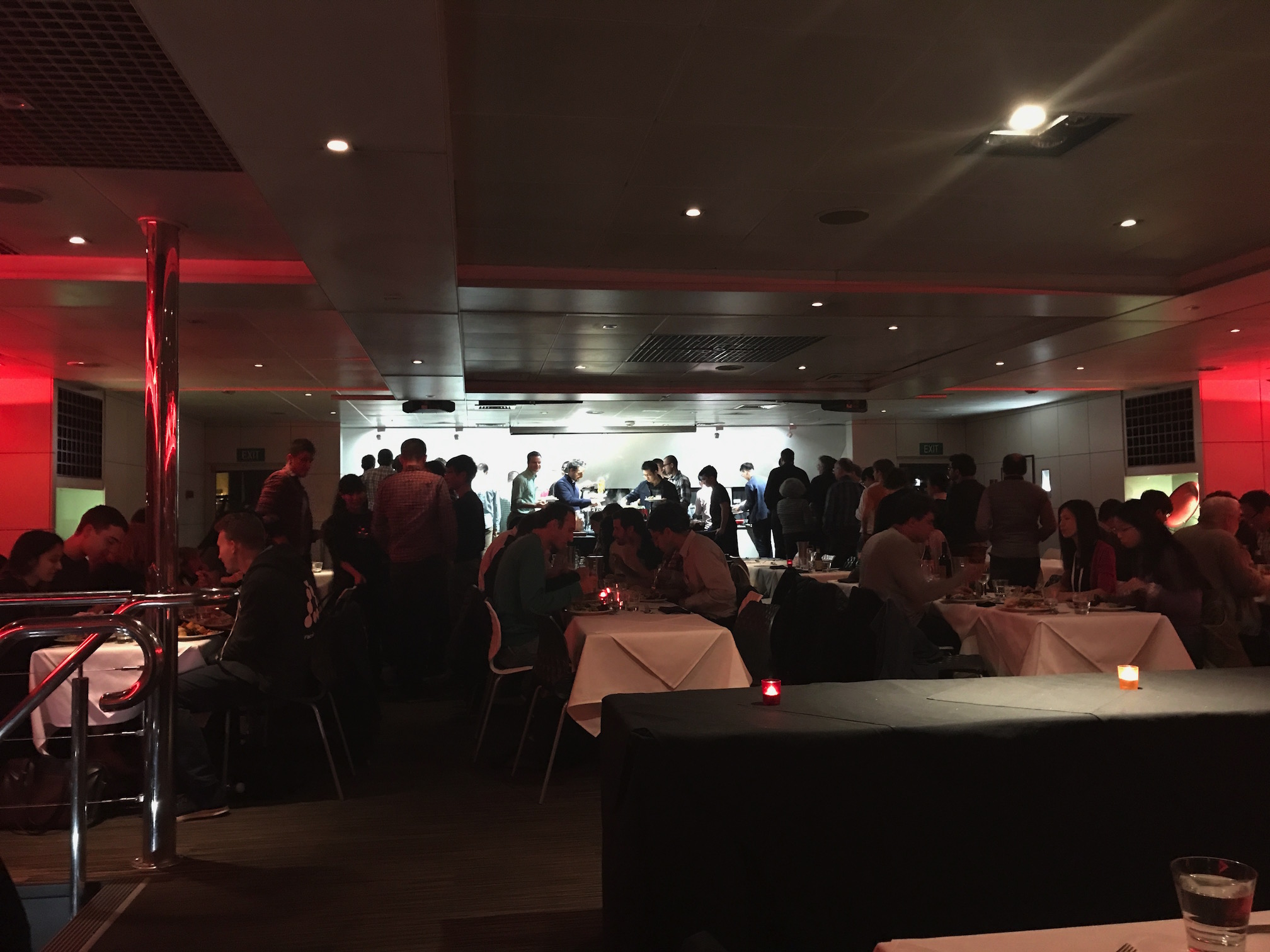 UAI 2017 conference attendees lining up to get dinner.

I don’t know about how others feel, but every time there’s an event like this where I have to pick my own seat amidst a large dinner gathering, I worry and overthink it way too much. Fortunately, there was a student who I met earlier at the conference who told me to sit near the center (gulp) of a table filled with other graduate students, thus saving me the stress of coming up with the decision myself. I was happy with this because it meant I wasn’t sitting by myself, and because it’s better for me to know other graduate students (and potential future collaborators/colleagues) rather than, for instance, industry sponsors.

Yes, it was extremely noisy in the ship, and I couldn’t participate in substantive conversations, but hey, at least I was sitting with other graduate students. And it seemed like there was some ongoing discussion regarding my blog, judging by how several of the other students nearby kept looking at my name tag in order to correctly spell my name in Google.

Throughout the cruise, we would frequently walk to the top of the ship and view Darling Harbor. 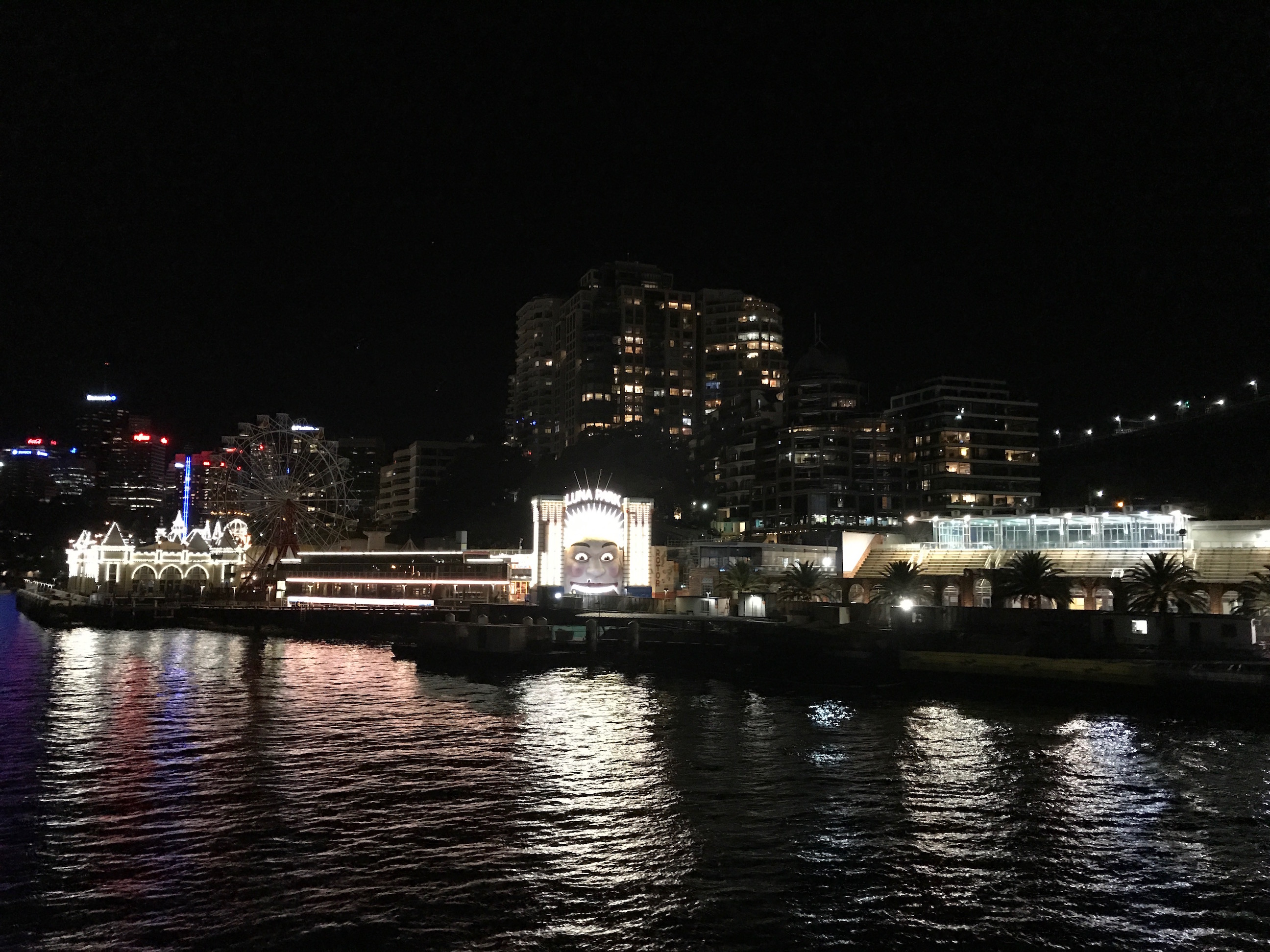 A view of Luna Park. 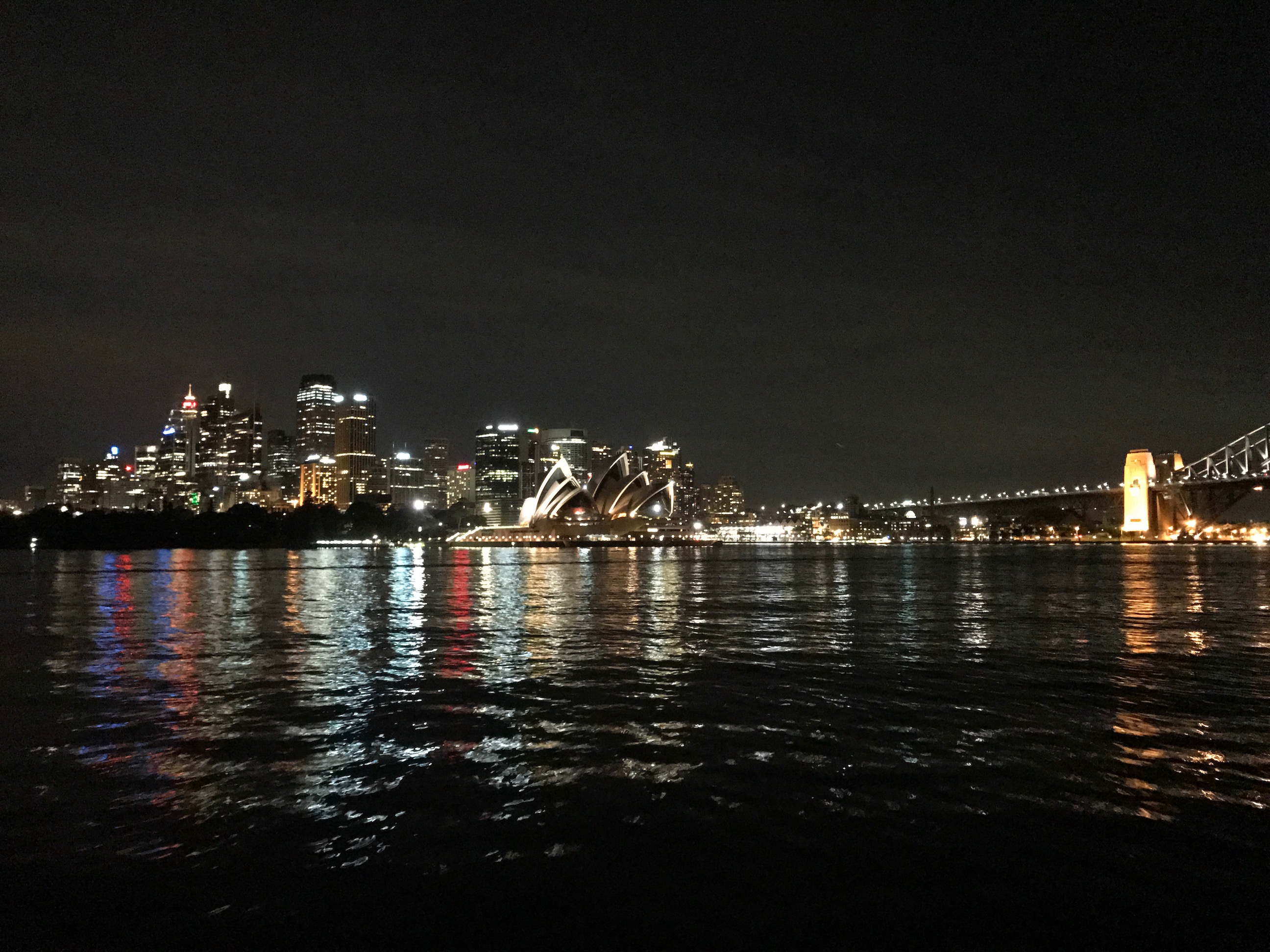 A view of the Sydney Opera House.