Due to my clever sleep schedule, I was able to wake up at 5:00am and feel refreshed. As I complained in my previous blog post, the hotel I was at lacks a fitness center, forcing me to go outside and run since I cannot for the life of me live a few days without doing something to improve my physical fitness.

I killed some time by reviewing details of the conference, then ran outside once the sun was rising. I ran on the bridge that crosses the river and was able to reach the conference location. It is close to a park, which has a splendid display of “BRISBANE” as shown here: 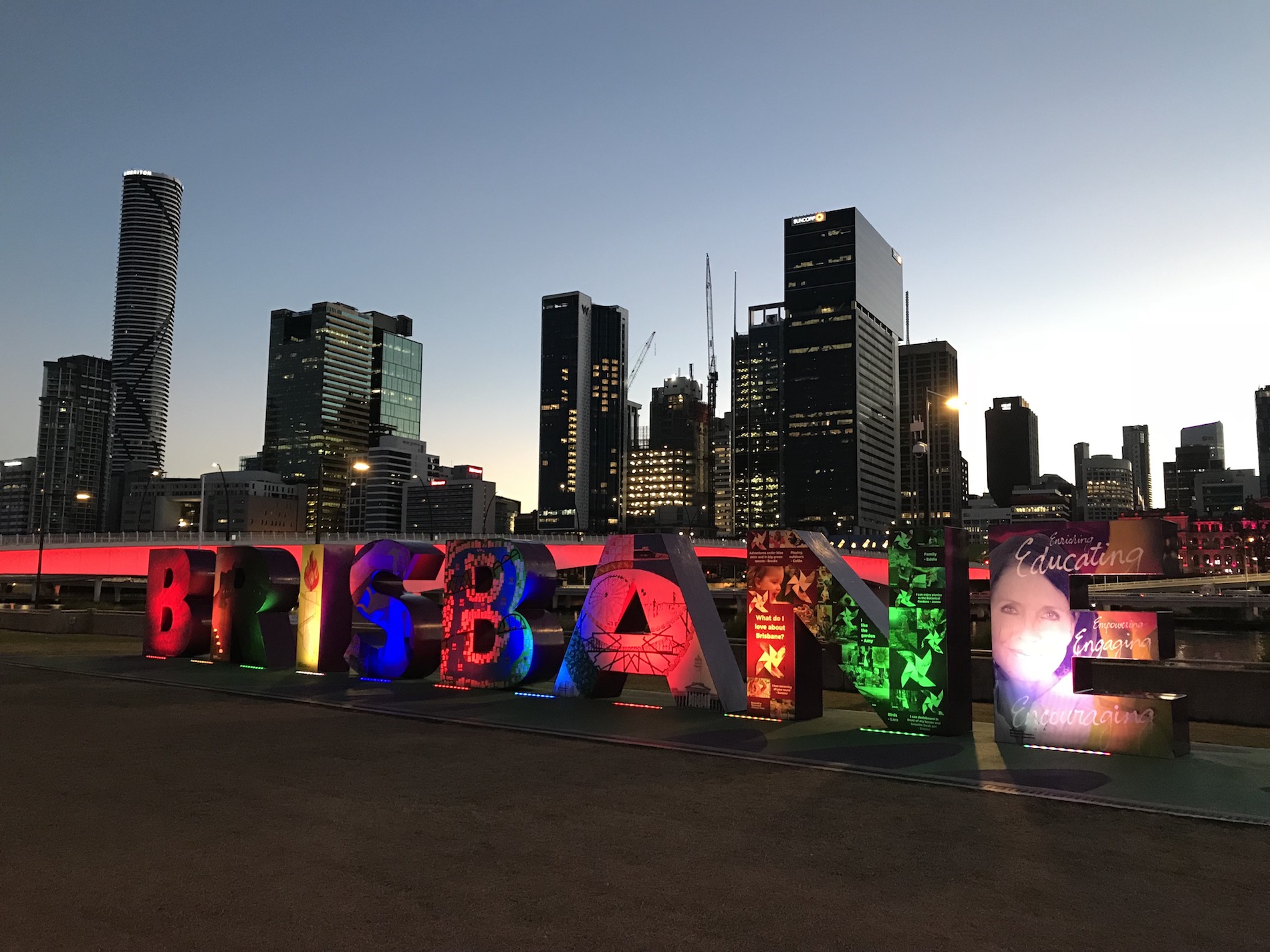 A nice view of Brisbane's sunrise.

After running, I prepared for the conference. I walked over and saw this where we were supposed to register: 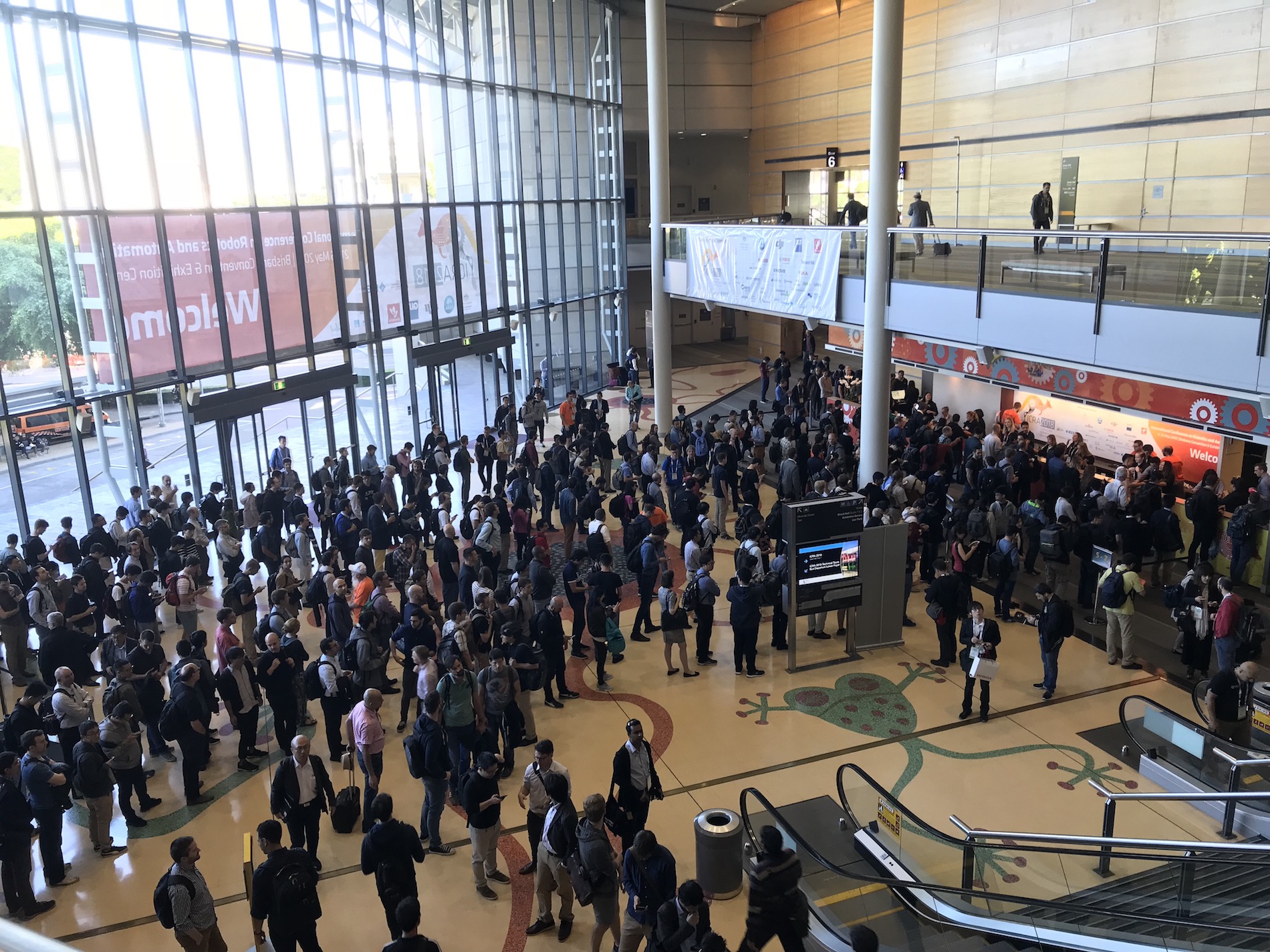 The line for registration on Monday morning.

This picture doesn’t do justice in showing ICRA’s popularity. There were a lot of attendees here.

But first, I had to meet my sign language interpreters! A few comments:

I met them and after customary introductions, it was soon 9:00am, when the first set of tutorials and workshops began. It seemed to be structured much like UAI 2017, in that there are workshops and tutorials on the first and last days, while the “main conference” lies in between. For us, this meant Monday and Friday were for the workshops/tutorials.

There were several full-day and half-day sessions offered on a variety of topics. I chose to attend the “Deep Learning for Robotics Perception” tutorial, because it had “Deep Learning” in the title. 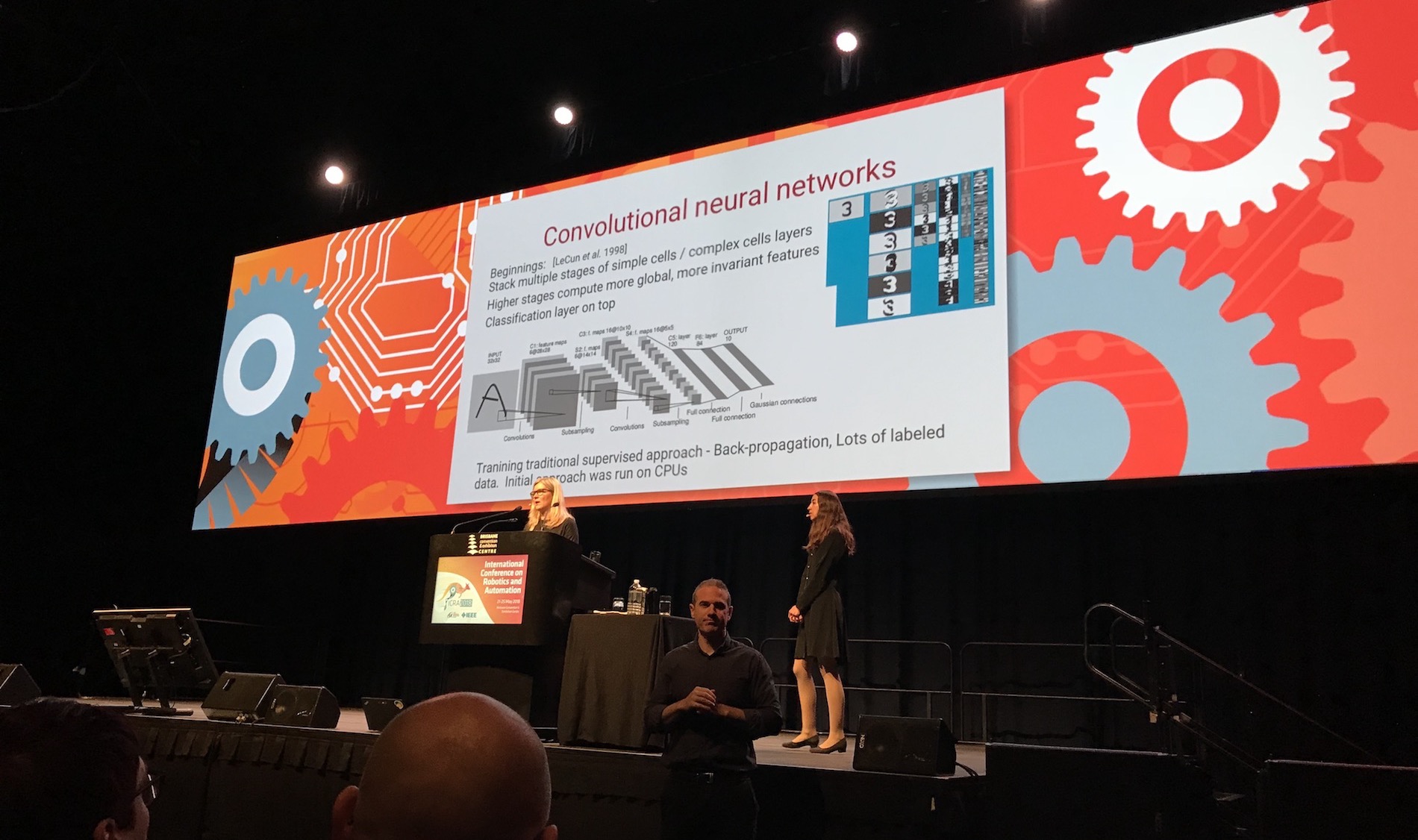 The morning tutorial on deep learning for robotics perception.

For this conference, I decided not to take detailed notes of every talk. I did that for UAI 2017, and it turned out to be of no use whatsoever as I never once looked at my Google Doc notes after the conference ended. Instead, my strategy now is to take pictures of any interesting slides, and then scan my photos after the conference to see if there’s anything worthwhile to follow-up.

The Deep Learning tutorial was largely on computer vision techniques that we might use for robotics. Much of the first half was basic knowledge to me. In the second half, it was a pleasure to see them mention the AUTOLAB’s work on Grasp-Quality Convolutional Neural Networks.

The interpreters had a massively challenging task with this tutorial. The one who knew ASL well was fine, but another one — who mentioned ASL was her fourth-best sign language — had to quit after just a few seconds (she apologized profusely) and be replaced. The third, who was also somewhat rusty with ASL, lasted his full time set, though admittedly his signing was awkward.

Fortunately, the one who had to quit early was able to recover and for her next 20-minute set, she was able to complete it, albeit with some anxiety coupled with unusual signs that I could tell were international or Auslan. Even with the American interpreter, it was still tremendously challenging for me to even follow the talk sentence-by-sentence, so I felt frustrated.

After lunch, we had the afternoon tutorials in a similar format. I attended the tutorial on visual servoing, featuring four 45-minute talks. The third was from UC Berkeley Professor Pieter Abbeel, who before beginning the talk found me in the crowd1 and congratulated me for making the BAIR blog a success.

You can imagine what his actual talk must have looked like: a packed, full room of amazed attendees trying to absorb as much of Pieter’s rapid-fire presentation as possible. I felt sorry for the person who had to present after Pieter, since about 80% of people the room left after Pieter finished his talk.

The sign language situation in the afternoon tutorials wasn’t much better than that of the morning tutorials, unfortunately. The presentation I understood the most in the afternoon was, surprise surprise, Pieter’s, but that’s because I had already read almost all of the corresponding research papers.

Later in the evening, we all gathered in the Great Hall, the largest room in the exhibition, for some opening remarks from the conference organizer. Before that, we had one of the more interesting conference events: a performance by indigenous Australians. To put a long story short, in Brisbane it’s common (according to my sign language interpreter) to begin large events by allowing indigenous Australians to perform some demonstration. This is a sign of respect for how these people inhabited Australia for many thousands of years.

For the show, several shirtless men with paint on them played music and danced. They rubbed wood with some other device and created some smoke and fire. Perhaps they got this cleared through the building’s security? I hope so. I took a photo of their performance, which you see below. Unfortunately it’s not the one with the smoke and fire. 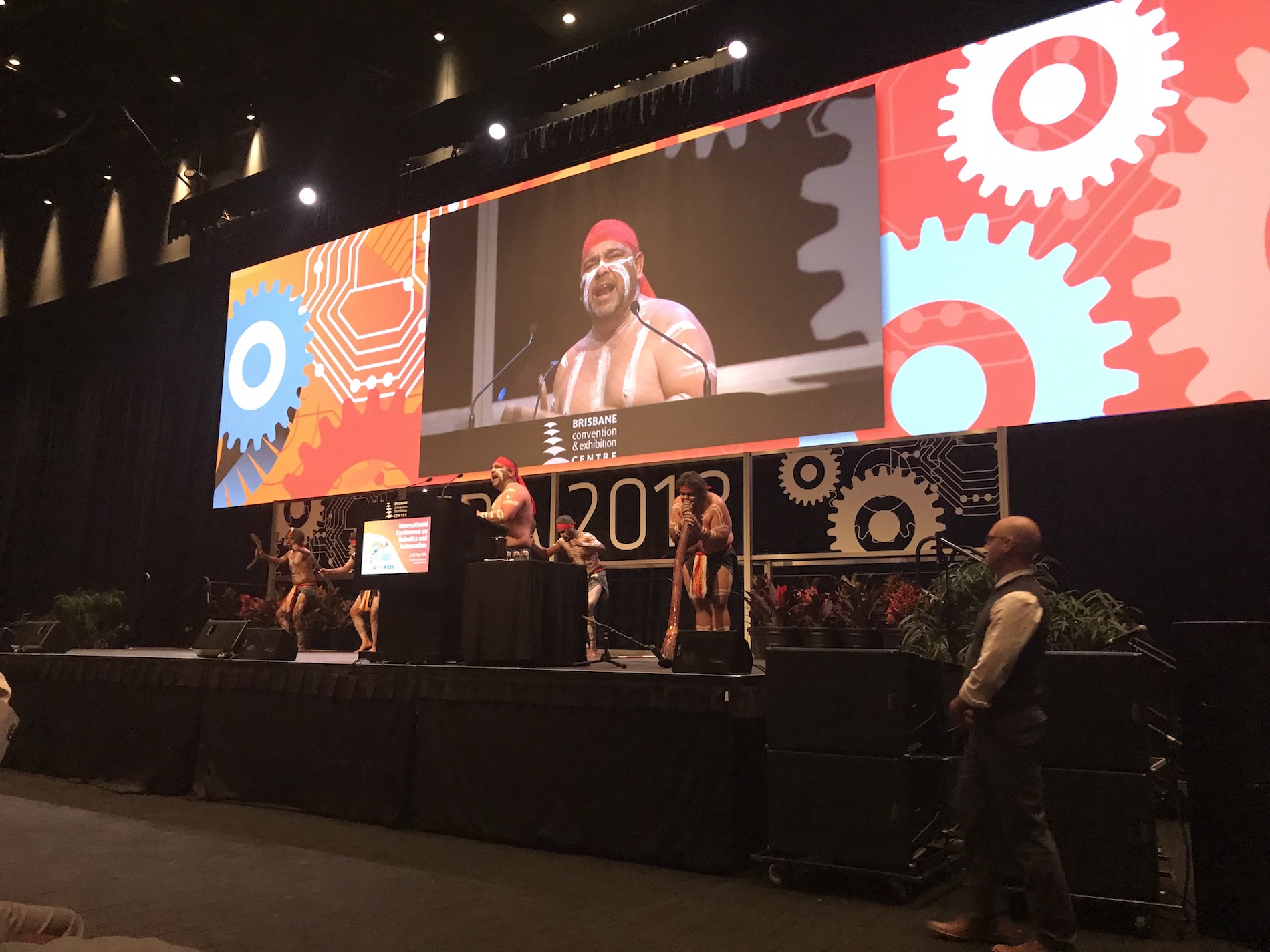 Native Australians giving us a show.

I don’t know if anyone else felt this way, but does it feel awkward seeing “natives” (whether Australian or American) wearing almost nothing while “privileged Asians and Whites” like me sit in the audience wearing business attire with our mandatory iPhones and Macbook Pro laptops in hand? Please don’t get me wrong: I fully respect and applaud the conference organizers and the city of Brisbane as a whole for encouraging this type of respect; I just wonder if there are perhaps better ways to do this. It’s an open question, I think, and no, ignoring history in America-style fashion is not a desirable alternative.

After the natives gave their show, to which they received rousing applause, the conference chair (Professor Peter Corke) provided some welcoming remarks and then conference statistics such as the ones shown in the following photo: 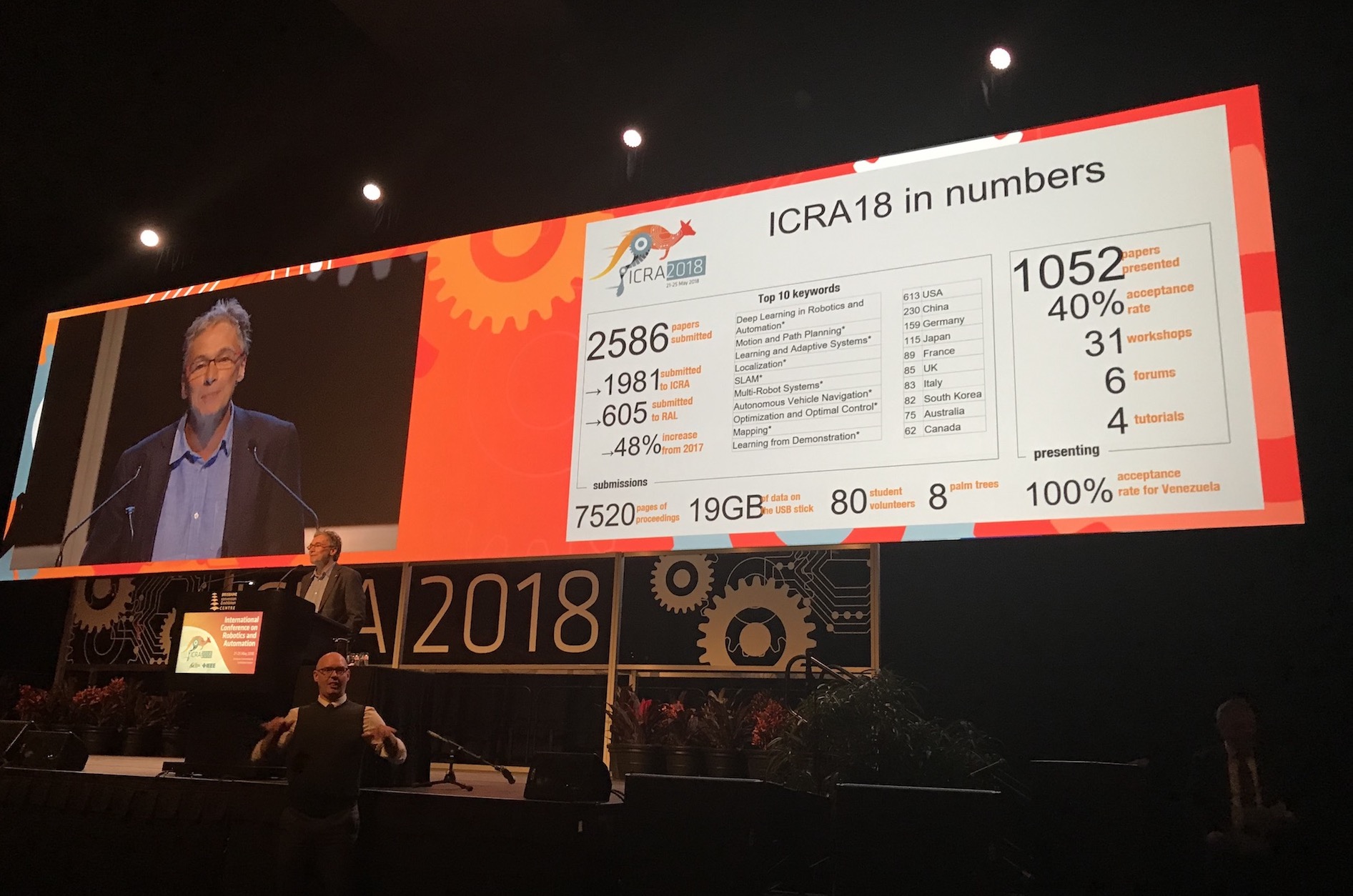 There are lots of papers at ICRA! Here are a few relevant statistics from this and other slides (not shown in this blog post):

After this, we all went over to the welcome reception.

The first thing I noticed: wow, this is going to be noisy and crowded. At least I would have a sign language interpreter who would tag along with me, which despite being awkward from a social perspective is probably the best I can hope for.

The second thing I noticed: wow, there are lots of booths that provide wine and beer. Here’s one of many: 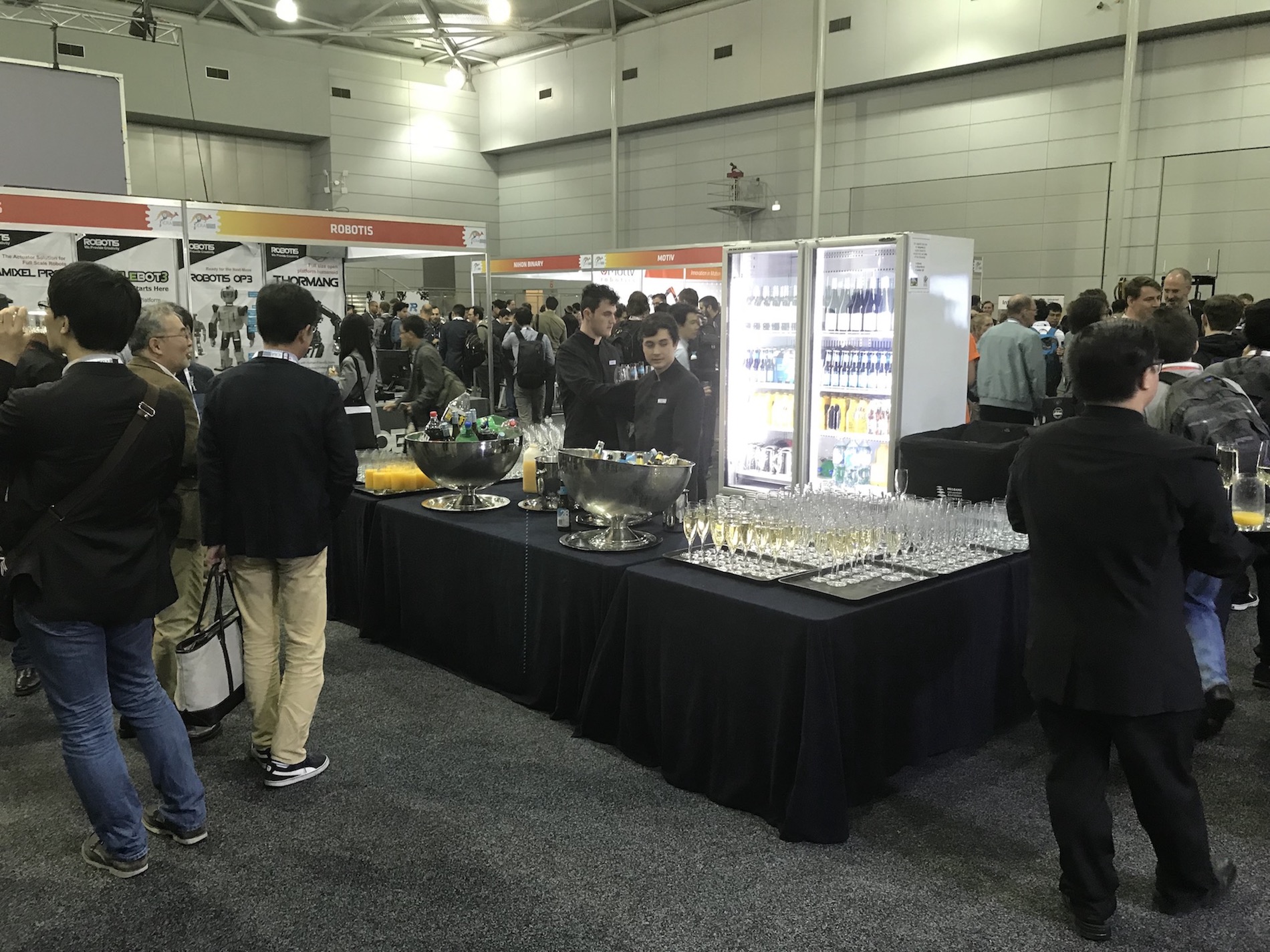 One of many drinking booths in the welcome reception on Monday night.

To satisfy our need for food, several convention employees would walk around with some finger food in their large plates. I learned from one of the sign language interpreters who was tagging along with me that one of the food samplings offered was a kangaroo dish. Apparently, kangaroo is a popular meat item in Australia.

It is also quite tasty.

There were a large number of booths for ICRA sponsors, various robotics competitions, or other demonstrations. For instance, here’s one of the many robotics demonstrations, this time for “field robotics,” I suppose: 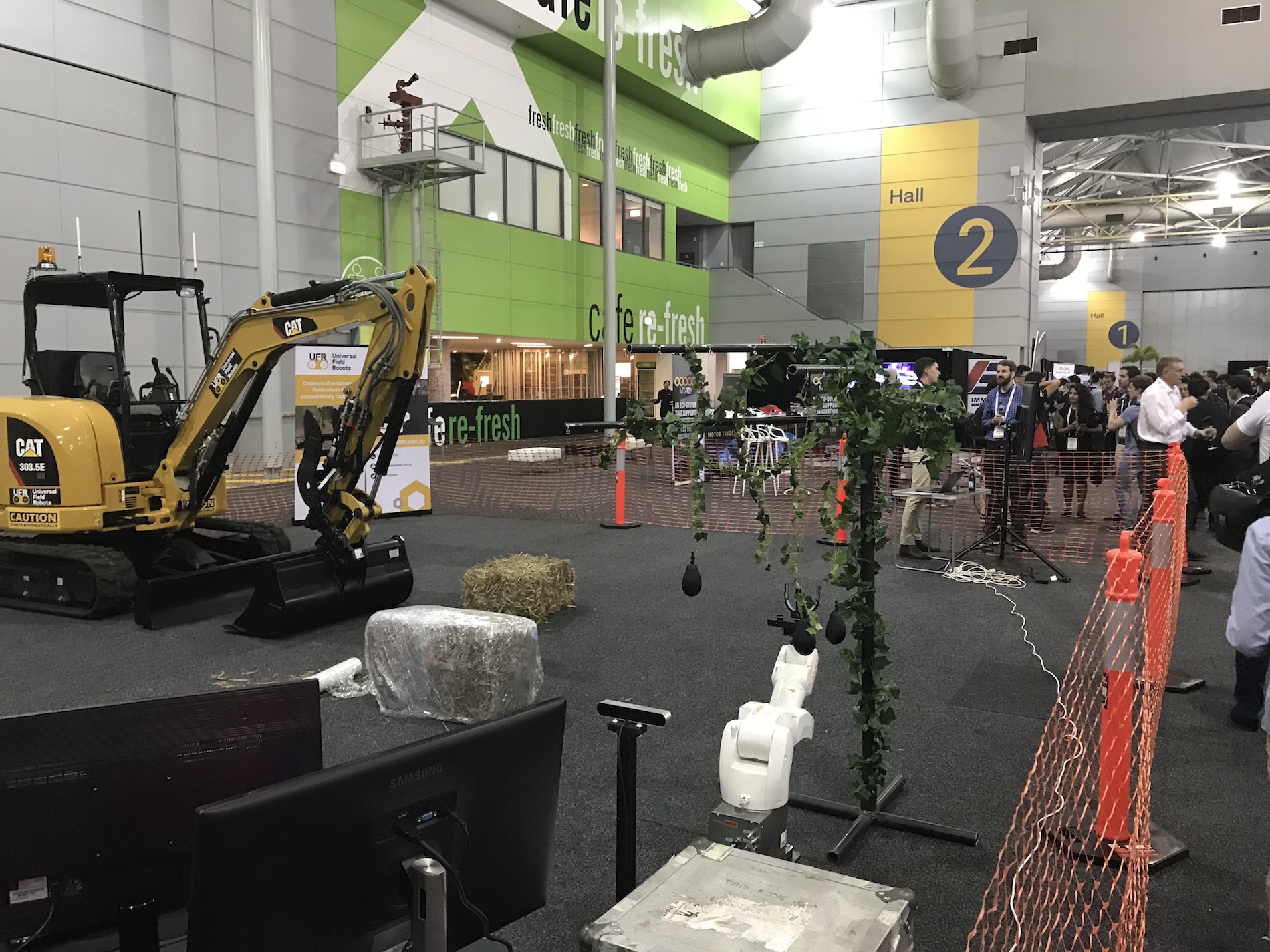 One of many robotics booths set up in the welcome reception.

And it wouldn’t be a (well-funded) Australian conference if we didn’t get to pet some animals. There were snakes and wombats (see below image) for us to touch: 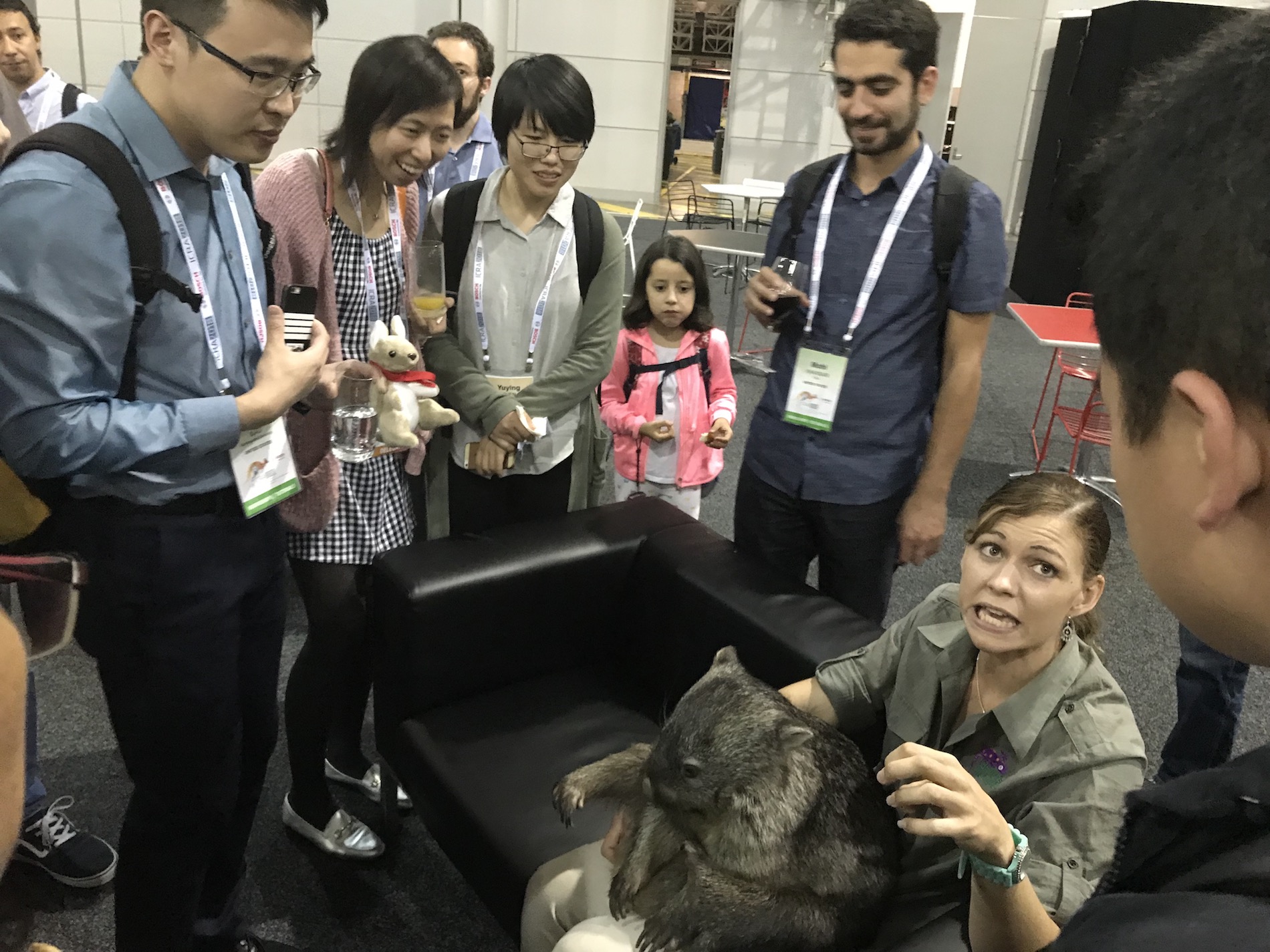 We could pet a wombat in the welcome reception (plus snakes and other animals).

I’ll tell you this: ICRA does not skimp on putting on a show. There was a lot to process, and unusually for me, I fell asleep extremely quickly once I got back to my hotel room.