For the fourth day of ICRA, I again went running (for the fourth consecutive morning). This time, rather than run across the bridge to get to the South Bank, I ran on a long pathway that extended below some roads: 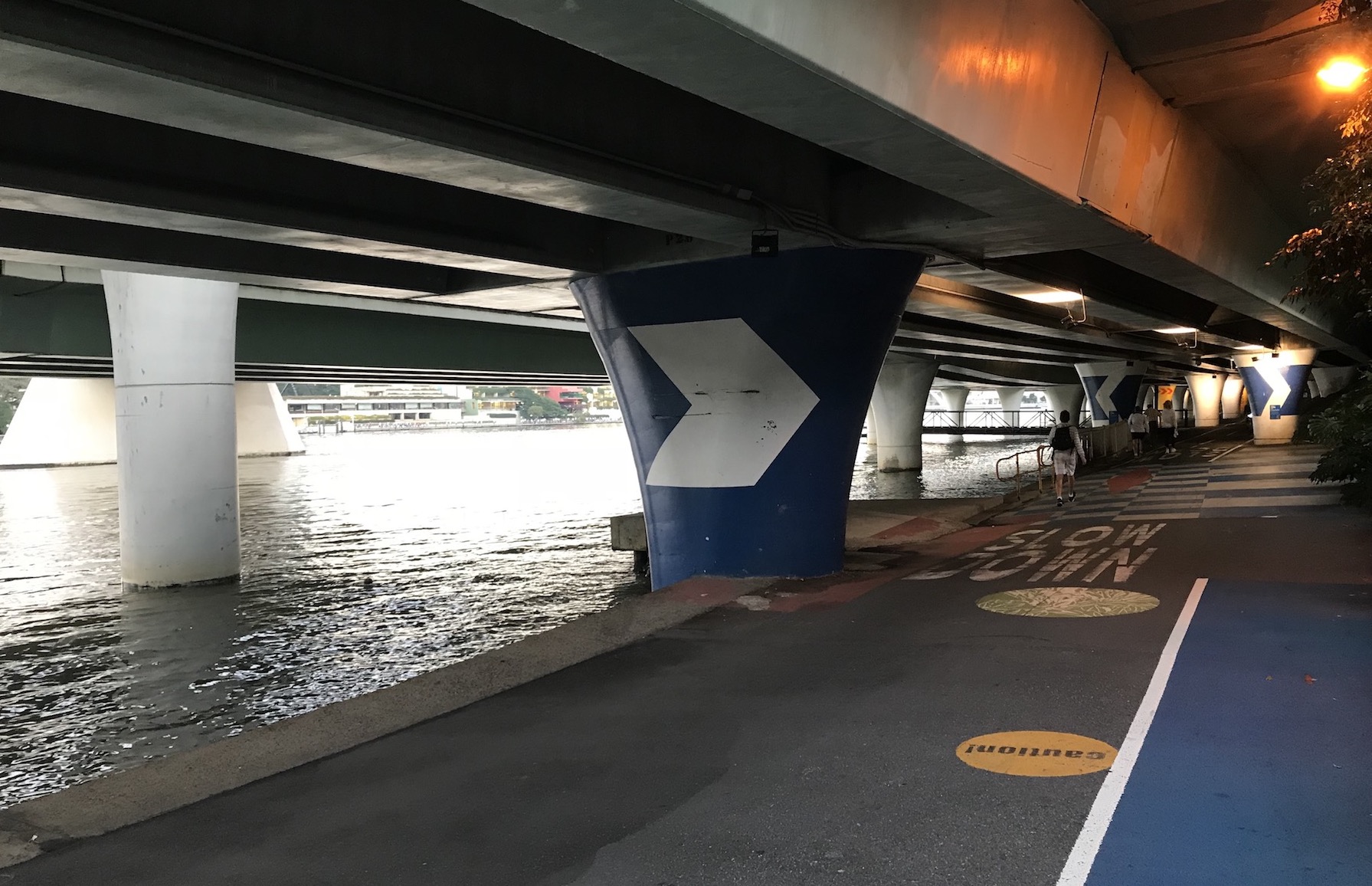 Below the roads, there is a long paved path.

Normally, I would feel hesitant to run underneath roads, since (at least in America) those places tend to be messy and populated by those with nowhere else to live. But the pathway here was surprisingly clean, and even at 6:30am, there were a considerable amount of walkers, runners, and bikers.

After my usual preparation, I went over to the conference for the 9:00am plenary talk, provided by Queensland Professor Mandyam Srinivasan. 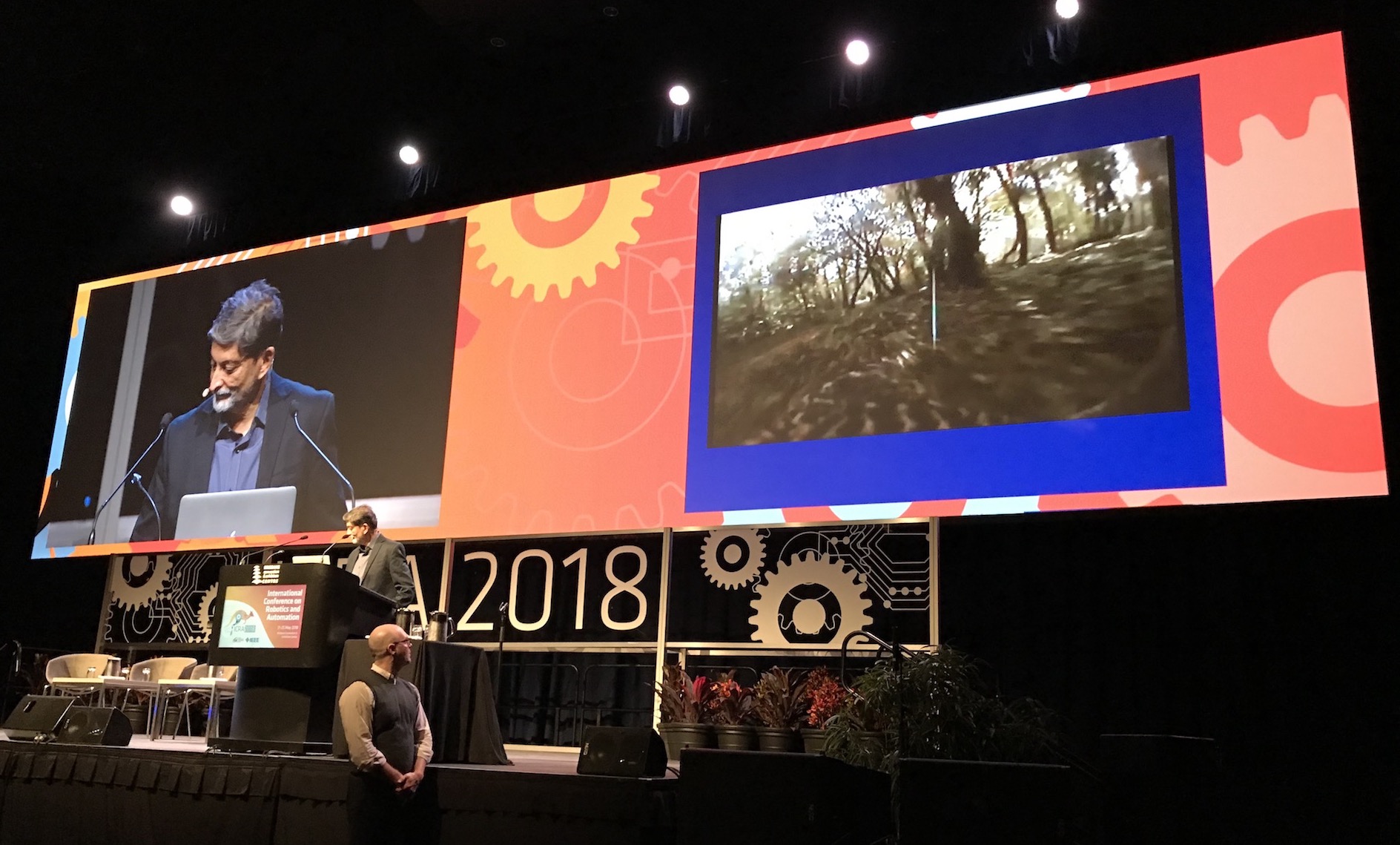 As usual, it was hard to follow the technical details of the talk. The good news is that the talk was high-level, probably (almost) as high-level as Professor Brooks’ talk, and certainly less technical than Raia Hadsell’s talk. I remember there being lots of videos in this plenary, which presents logistical “eye-challenges” since I have to figure out a delicate balance of looking at the video or the sign language interpreter.

Due to the biological nature of the talk, I also remembered Professor Robert Full’s thrilling keynote at the Bay Area Robotics Symposium last November. I wonder if those two have ever collaborated?

I stayed for the keynote talk after that, about soft robotics, and then we had the morning poster session. As usual, there was plenty of food and drink, and I had to resist the urge to keep making trips to the food tables. The food items followed the by-now familiar pattern of one “sweet” and one “savory” item: 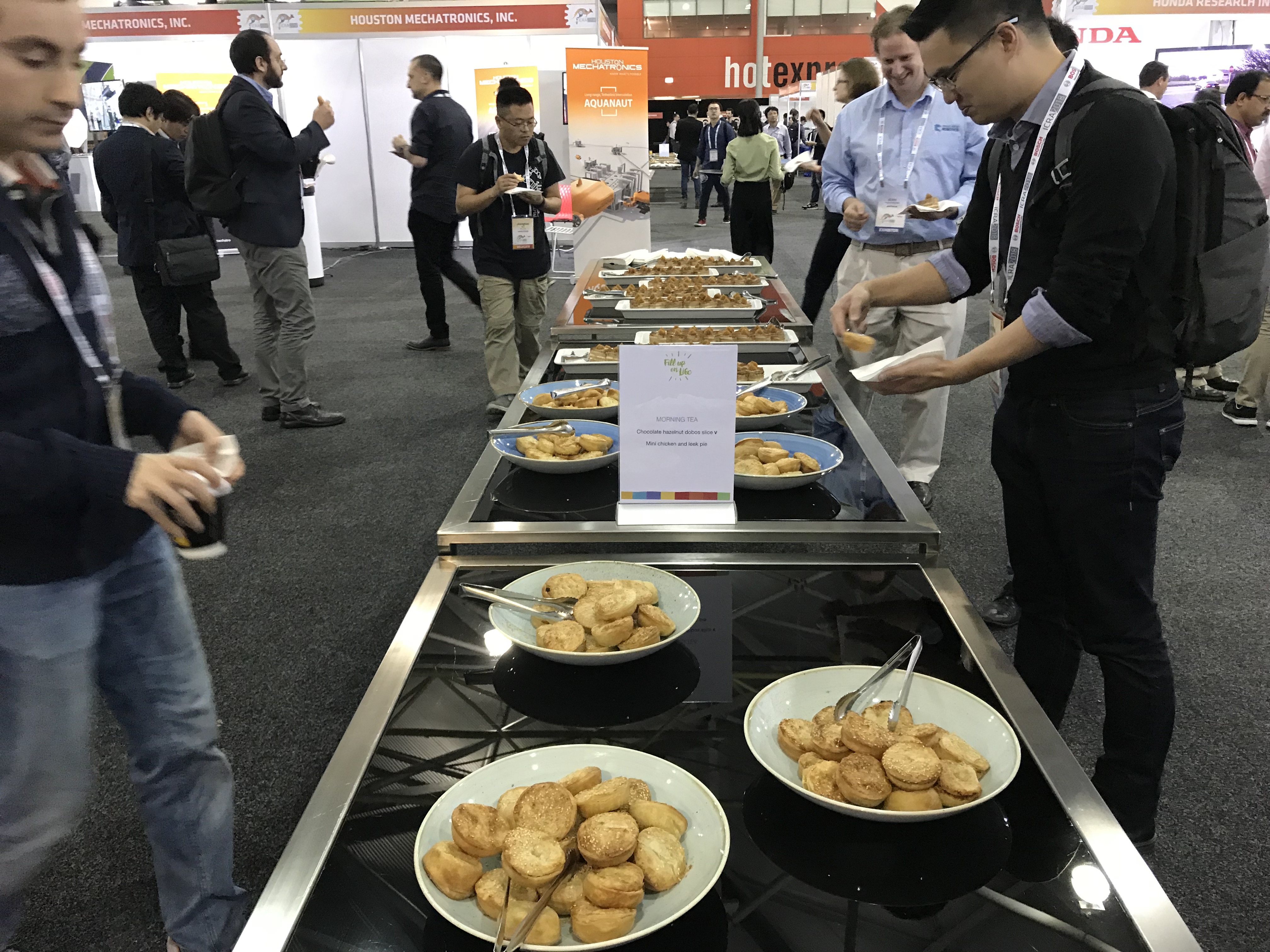 Later, we had the sixth and final poster session of the conference. The most interesting thing for me was … me, since that was when I presented my poster: 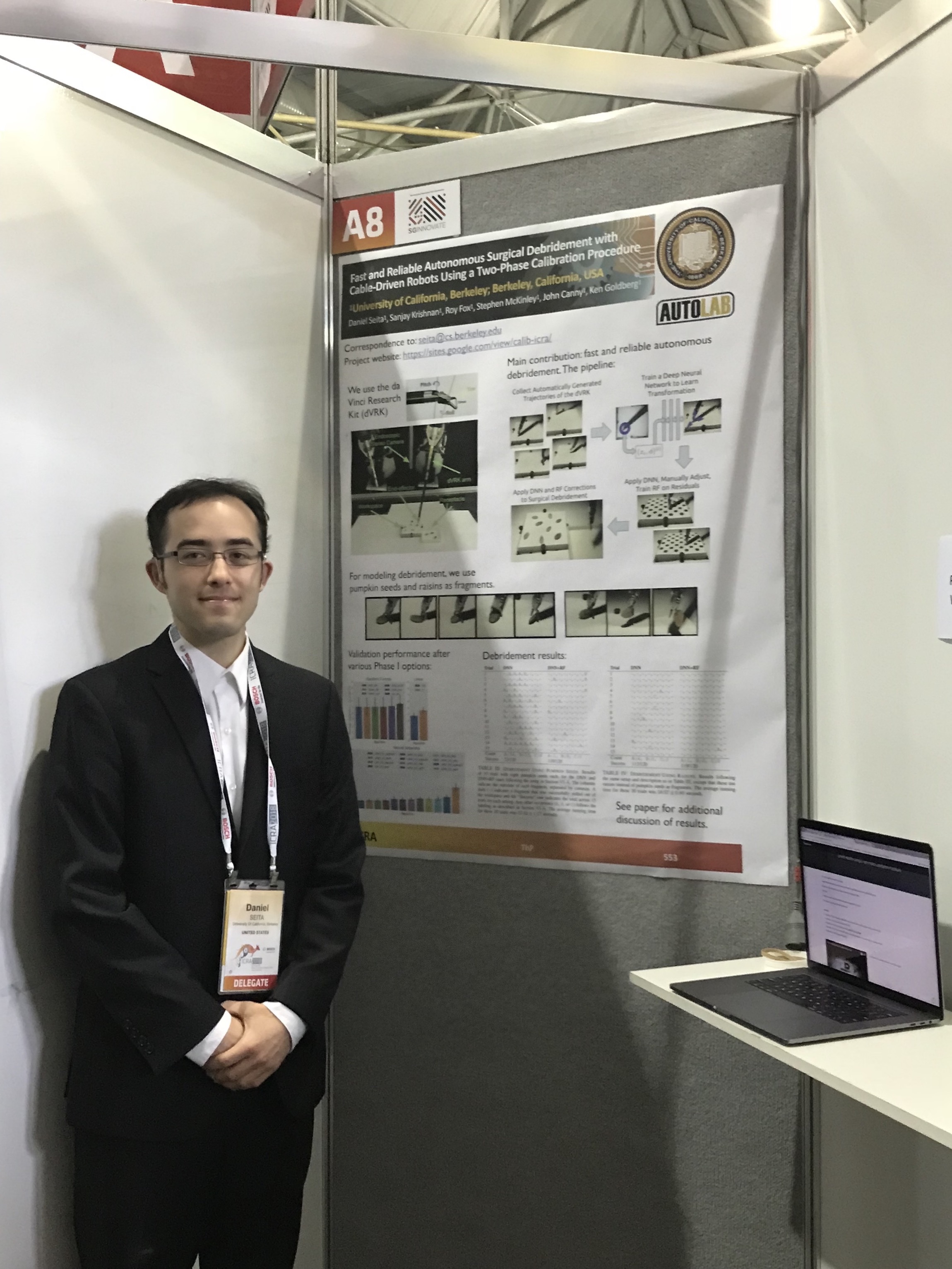 I, standing by my poster.

I stood there for 2.5 hours and talked with a number of conference attendees. Thankfully, none of the conversations were hostile or overly combative. People by and large seemed happy with what I was doing and saying. Also, my sign language interpreters finally had something to do during the poster sessions, since for the other five I had mostly been walking around without talking to people.

After the poster session, we had the farewell reception, which (as you can expect) was filled with lots of food and drinks. It took place in the plaza level of the convention center, which included an outside area along with several adjacent indoor rooms.

The food items included the usual bread, rice, and veggie dishes. For meat, we had salmon, sausages, and steak: 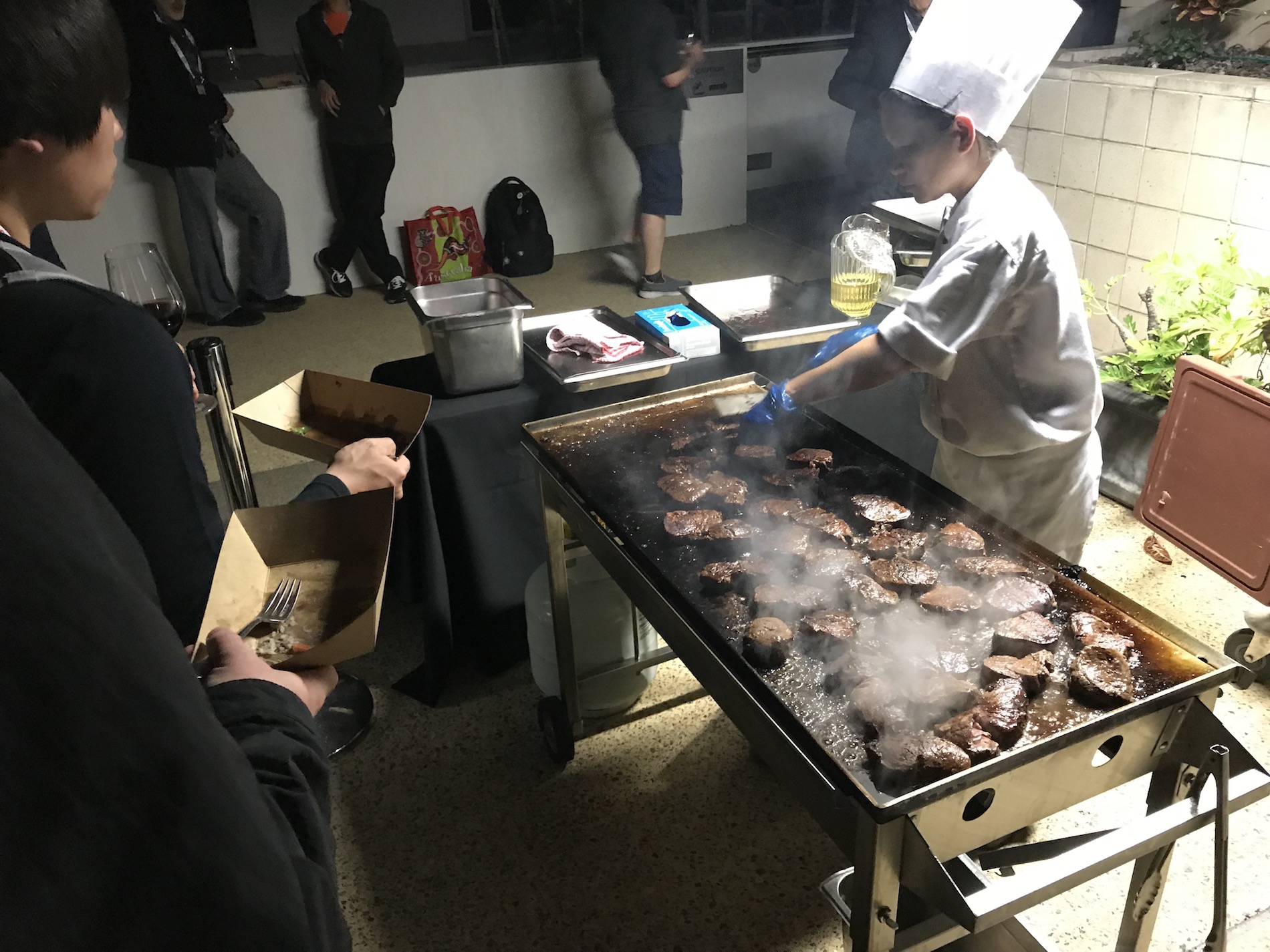 Some delicious steaks being cooked.

The steak was delicious!

Interestingly enough, the “dessert” turned out to be fruit, breaking the trend from past meals. 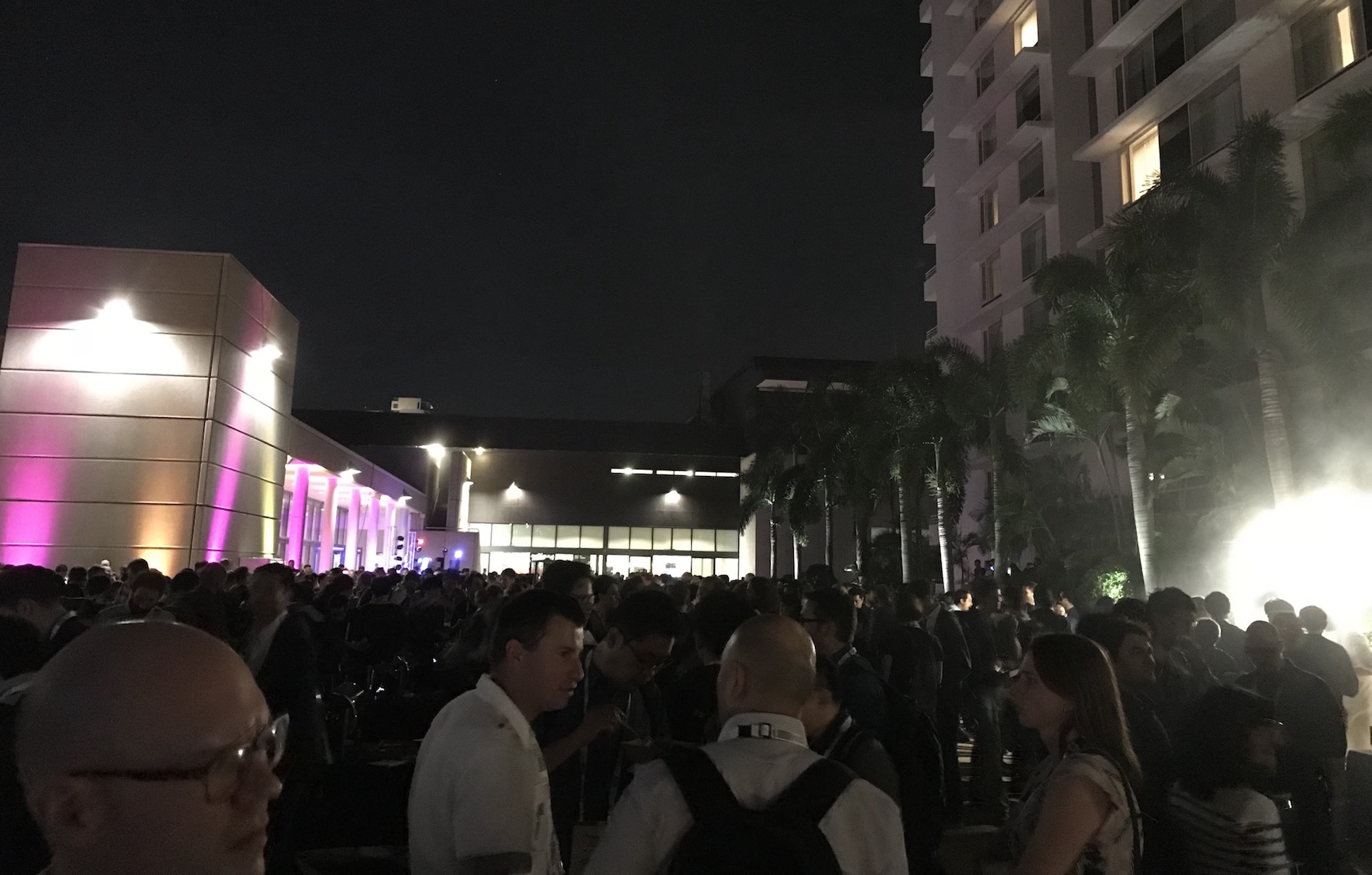 The farewell reception was crowded and dark, but the food was great.

The reception was crowded with long lines for food, particularly for the steak (obviously!). The other food stations providing the salmon and sausages were frequently out of stock. These are, however, natural problems since most of us were grabbing as much meat as we could during our first trips to the food tables. Maybe we need an honor code about the amount of meat we consume?

As an aside, I think for future receptions, ICRA should provide backpack and poster tube storage. We had that yesterday for the conference dinner and it was very helpful since cocktail-style dining means both hands are often holding something — one for alcoholic beverages and the other for food. Since I had just finished presenting my poster/paper, I was awkwardly lugging around a poster tube. My sign language interpreter kindly offered to hold it for the time I was there.

Again, ICRA does not skimp on the food and beverages. Recall that we had a welcome reception (day one), a conference dinner (day three) and the farewell reception (day four, today), so it’s only the second and fifth evenings that the conference doesn’t officially sponsor a dinner.