OpenAI, a San Francisco nonprofit organization, has been in the news for a number of reasons, such as when their Dota2 AI system was able to beat a competitive semi-professional team, and when they trained a robotic hand to have unprecedented dexterity, and in various contexts about their grandiose mission of founding artificial general intelligence. It’s safe to say that such lofty goals are characteristic of an Elon Musk-founded company (er, nonprofit). I find their technical accomplishments impressive thus far, and hope that OpenAI can continue their upward trajectory in impact. What I’d like to point out in this blog post, though, is that I don’t actually find their Dota2 system, their dexterous hand, or other research products to be their most useful or valuable contribution to the AI community.

I think OpenAI’s open-source baselines code repository wins the prize of their most important product. You can see an announcement in a blog post from about 1.5 years ago, where they correctly point out that reinforcement learning algorithms, while potentially simple to describe and outline in mathematical notation, are surprisingly hard to implement and debug. I have faced my fair share of issues in implementing reinforcement learning algorithms, and it was a relief to me when I found out about this repository. If other AI researchers base their code on this repository, then it makes it far easier to compare and extend algorithms, and far easier to verify correctness (always a concern!) of research code.

That’s not to say it’s been a smooth ride. Far from it, in fact. The baselines repository has been notorious for being difficult to use and extend. You can find plenty of complaints and constructive criticism on the GitHub issues and on reddit (e.g., see this thread).

The good news is that over the last few months — conveniently, when I was distracted with ICRA 2019 — they substantially refactored their code base.

While the refactoring is still in progress for some of the algorithms (e.g., DDPG, HER, and GAIL seem to be following their older code), the shared code and API that different algorithms should obey is apparent.

First, as their README states, algorithms should now be run with the following command:

The baselines.run is a script shared across algorithms that handles the following tasks:

Incidentally, I have listed the above in order of code logic, at least as of today’s baselines code. Who knows what will happen in a few months?

Since the code base has been refactored, I decided to run a few training scripts to see performance. Unfortunately, despite the refactoring, I believe the DQN-based algorithms still are not correctly implemented. I filed a GitHub issue where you can check out the details, and suffice to say, this is a serious flaw in the baselines repository.

So for now, let’s not use DQN. Since A2C seems to be working, let us go ahead and test that. I decided to run the following command line arguments:

Yes, I know my computer has only 8 CPUs but I am running with 16. I’m not actually sure how this works, maybe each CPU has to deal with two processes sequentially? Heh.

When you run these commands, it (in the case of 16 environments) creates the following output in the automatically-created log directory:

Clearly, there is one monitor.csv for each of the 16 environments, which contains the corresponding environment’s episode rewards (and not the other 15).

The log.txt is the same as the standard output, and progress.csv records the log’s stats.

Using this python script, I plotted the results. They are shown in the image below, which you can expand in a new window to see the full size. 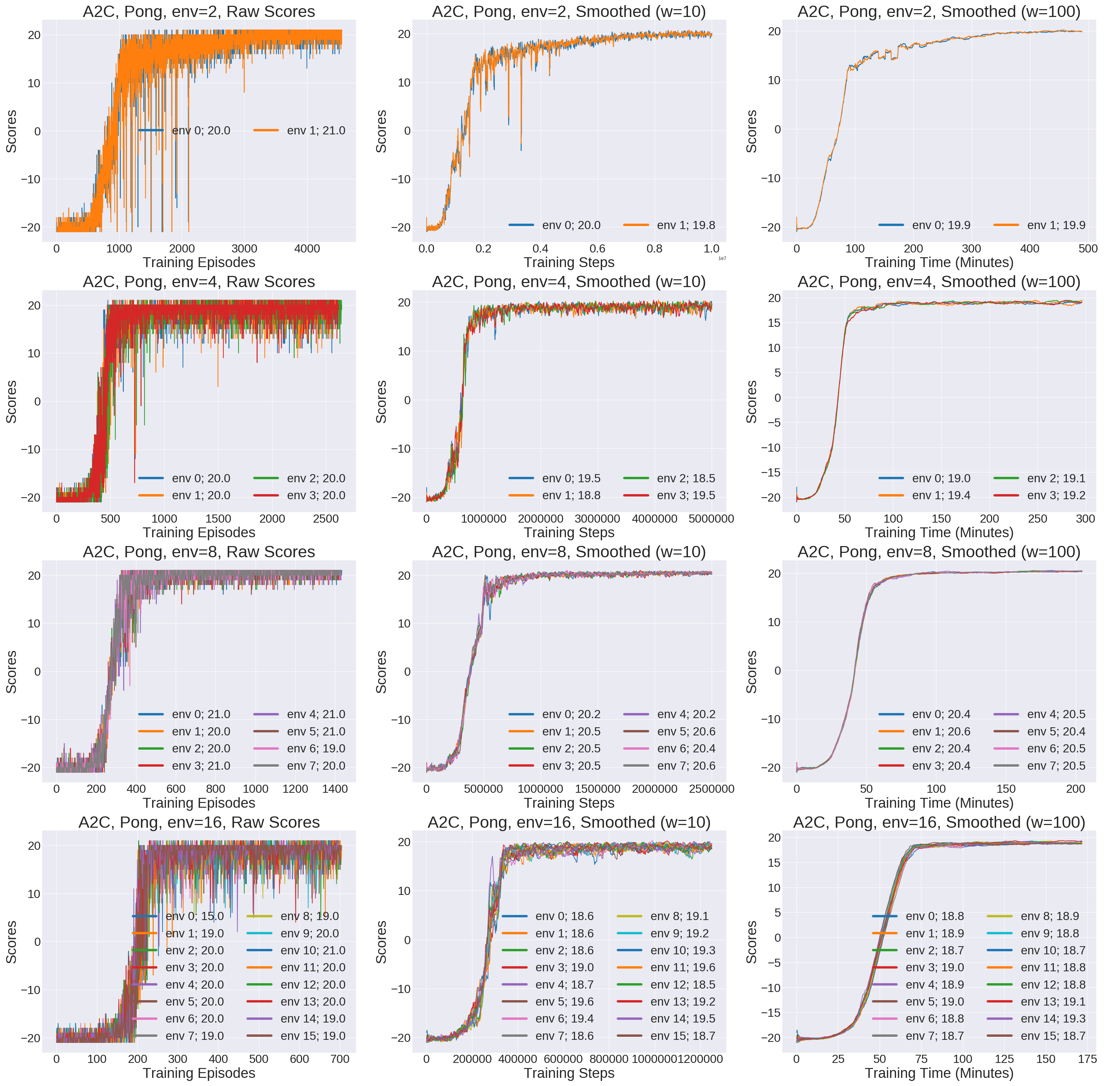 Results of the A2C commands. Each row corresponds to using a different number of environments (2, 4, 8, or 16) in A2C, and each column corresponds to some smoothing setting for the score curves, and some option for the x-axis (episodes, steps, or time).

It seems like running with 8 environments results in the best game scores, with the final values for all 8 surpassing 20 points. The other three settings look like they need a little more training to get past 20. Incidentally, the raw scores (left column) are noisy, so the second and third column represent smoothing over a window of 10 and 100 episodes, respectively.

The columns also report scores as a function of different items we might care about: training episodes, training steps, or training time (in minutes). The x-axis values vary across the different rows, because the 2e7 steps limit considers the combination of all steps in the parallel environments. For example, the 16 environment case ran in 175 minutes (almost 3 hours). Interestingly enough, the speedup over the 8 environment case is smaller than one might expect, perhaps because my computer only has 8 CPUs. There is, fortunately, a huge gap in speed between the 8 and 4 settings.

Whew! That’s all for now. I will continue checking the baselines code repository for updates. I will also keep trying out more algorithms to check for correctness and to understand usage. Thanks, OpenAI, for releasing such an incredibly valuable code base!