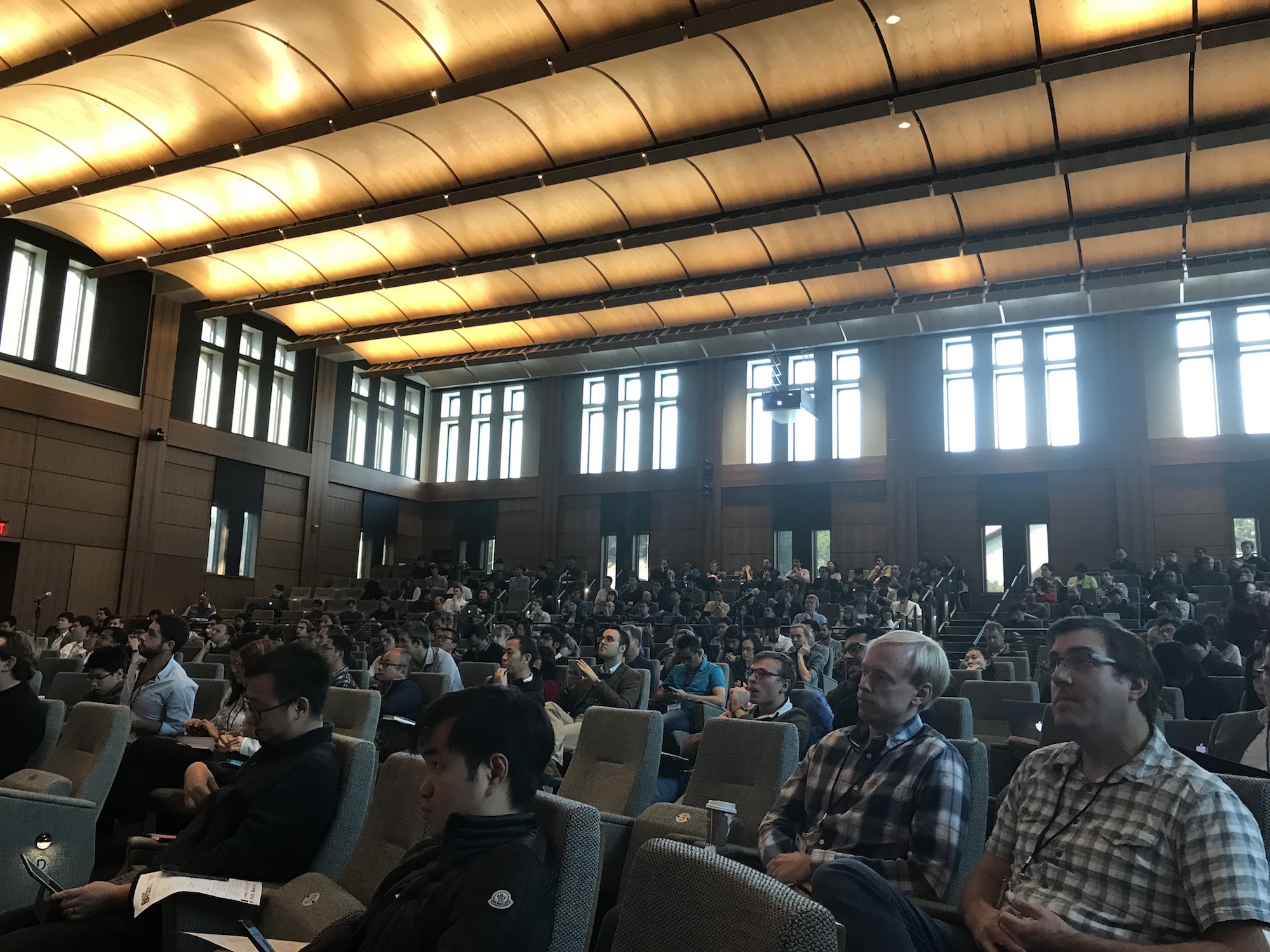 The auditorium where BARS 2018 talks occurred, which was within the Hoover Institution. The number of attendees was capped at 400. 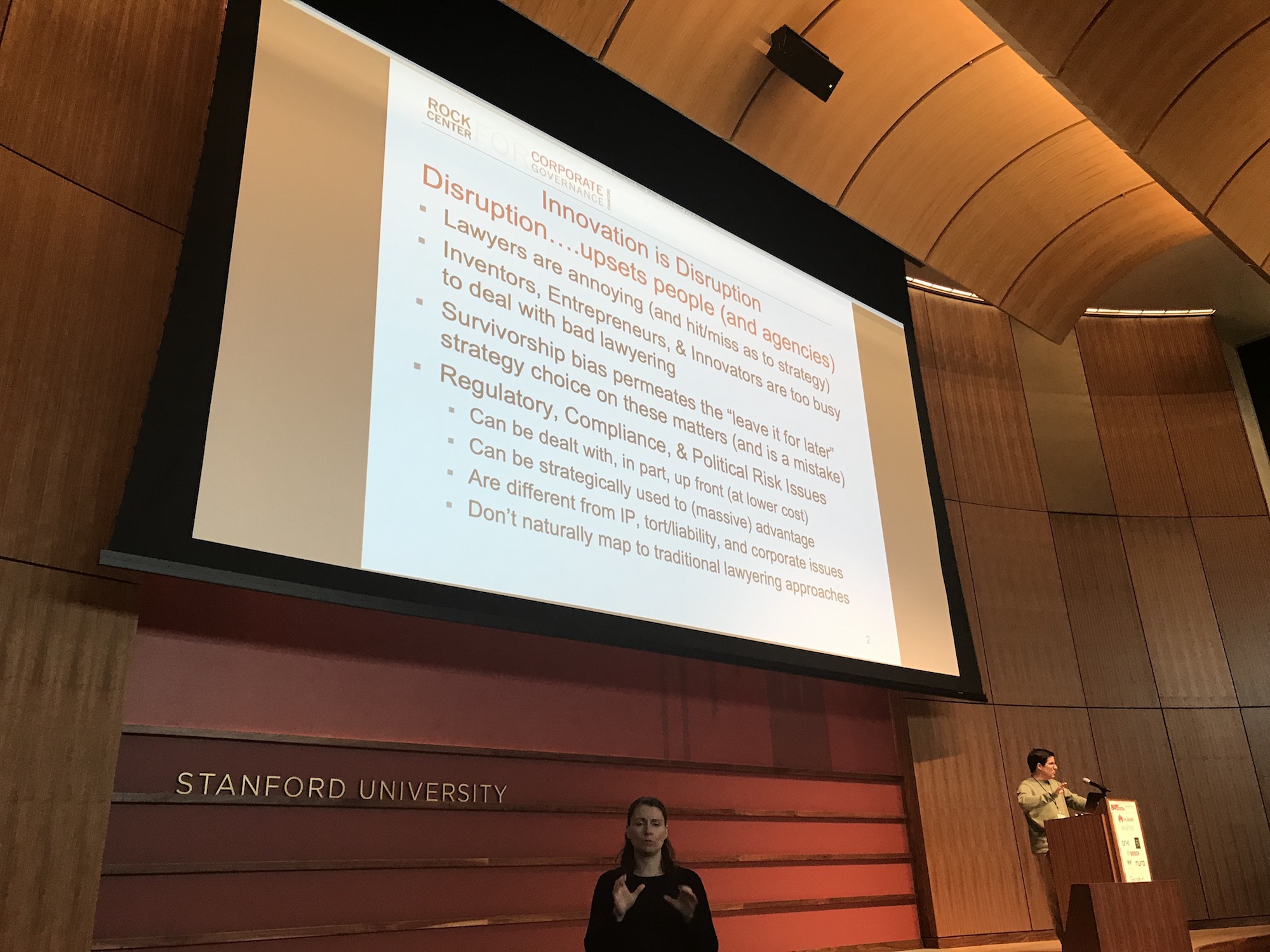 An example presentation at BARS.

A few weeks ago, I attended the Bay Area Robotics Symposium (BARS). Last year, BARS was at the UC Berkeley International House, and you can see my blog post summary here. This year, it was at Stanford University, within one of the Hoover Institution buildings. Alas, I did not get to meet 97-year-old George Shultz or 91-year-old William Perry so that I could thank them for helping to contain the threat of nuclear warfare from the Cold War to the present day.

Oh, and so that I could also ask how to become a future cabinet member.

The location of BARS alternates between Berkeley and Stanford since those are the primary sources of cutting-edge academic robotics research in the Bay Area. I am not sure what precisely differs “Berkeley-style” robotics from “Stanford-style” robotics. My guess is that due to Pieter Abbeel and Sergey Levine, Berkeley has more of a Deep Reinforcement Learning presence, but we also have a number of researchers in “classical” robotics (who may also use modern Deep Learning technologies) such as our elder statesmen Ken Goldberg and Masayoshi Tomizuka, and elder stateswoman Ruzena Bajcsy.

It is unclear what Stanford specializes in, though perhaps a reasonable answer is “everything important.” Like Berkeley, Deep Learning is extremely popular at Stanford. Pieter and Sergey’s former student, Chelsea Finn, is joining the Stanford faculty next year, which will balance out the Deep Reinforcement Learning research terrain.

The bulk of BARS consists of 10-minute faculty talks. Some interesting tidbits:

Since BARS is funded in part by industry sponsors, the sponsors were allotted some presentation time. The majority were about self-driving cars. It was definitely clear what the hot topic was there …

In addition to the faculty and industry talks, there were two keynote talks. Last year, Professor Robert Full’s keynote was on mobile, insect-like robots. This year, Stanford NLP professor Chris Manning had the first slot, and in a sign of the increasing importance of robotics and the law, California Supreme Court Justice Mariano-Florentino Cuéllar gave the second keynote. That was unexpected.

During the Q-&-A session, I remember someone asking the two men how to deal with the rising pace of change and the threat of unemployment due to intelligent robots automating out jobs. I believe Professor Manning said we needed to be lifelong learners. That was predictable, and no worries, I plan to be one. I hope this was obvious to anyone who knows me! (If it was not, please contact me.)

But … Professor Manning lamented that not everyone will be lifelong learners, and disapprovingly commented about people who spend weekends on “football and beer.”

The Americans among us at BARS are probably not the biggest football fans (I’m not), and that’s before we consider the students from China, India, and other countries where football is actually soccer.

Professor Manning can get away with saying that to a BARS audience, but I would be a little cautious if the audience were instead a random sample of the American population.

BARS had two poster sessions with some reasonable food and coffee from our industry sponsors. These were indoors (rather than outdoors as planned) due to air quality concerns from the tragic California fires up north.

During the poster sessions, it was challenging to communicate with students, since most were clustered in groups and sign language interpreters can have difficulty determining the precise voice that needs to be heard and translated. Probably the most important thing I learned during the poster session was not even a particular research project. I spoke to a recent postdoc graduate from Berkeley who I recognized, and he said that he was part of a new robotics research lab at Facebook. Gee, I was wondering what took Facebook so long to establish one! Now Facebook joins Google, NVIDIA, and OpenAI with robotics research labs that, presumably, use machine learning and deep learning.

After BARS, I ate a quick dinner, bought Fukuyama’s successor book to the one I read and discussed earlier this month at the Stanford bookstore, and drove back home.

Overall, BARS went as reasonable as it probably could have gone for me.

One lasting impression on me is that Stanford’s campus is far nicer than Berkeley’s, and much flatter. No wonder Jitendra Malik was “joking” last year about how robots trained on Stanford’s smooth and orderly design would fail to generalize to Berkeley’s haphazardness. 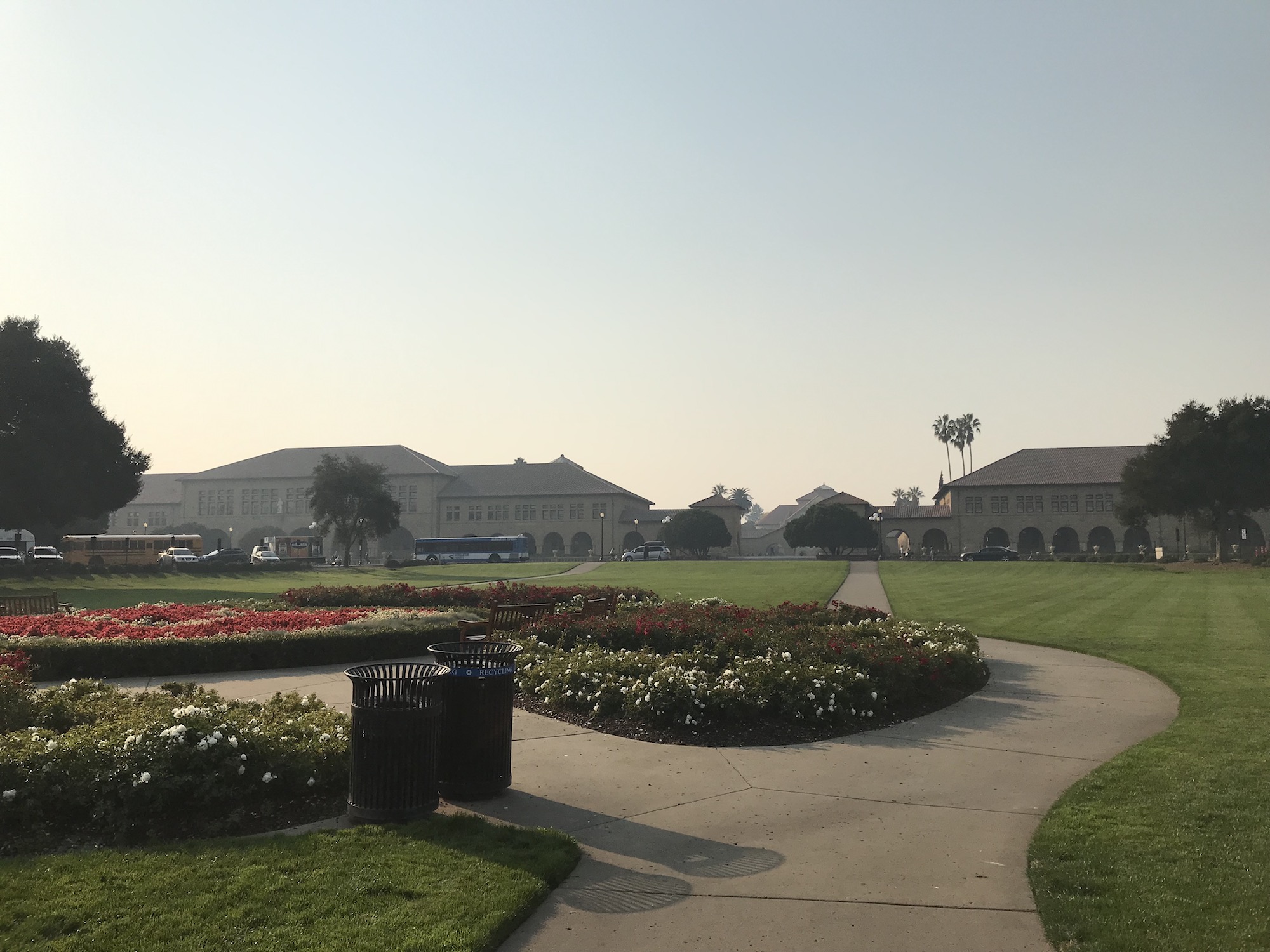