In the past, I have written about some workflow and coding tips, such as improving my development environment with virtualenvwrapper, organizing GitHub repositories, running and saving experiments in Python and understanding (a little) about how docker works.

As I transition to my new postdoc role at CMU as of September 2021, it feels like a good time to recap my current workflow. I am constantly trying to think about how I can be more productive and whether I should learn about this or that feature (the answer is usually “no” but sometimes it is “yes”).

In this blog post, I will discuss different aspects of my current workflow, with a focus on: (1) conda environments, (2) installing TensorFlow and Pytorch with CUDA, and (3) managing storage on shared machines.

In the future, I plan to update this post with additional information about my workflow. There are also parts of my prior workflow that I have gotten rid of. Looking back, I’m surprised I managed to get a PhD with some of the sloppy tactics that I employed!

When reading this post, keep in mind that the main operating system I use is Ubuntu 18.04 and that I do essentially all my programming with Python. (I keep telling myself and writing in my New Year Resolution documents that I will get back to coding with C++, but I never do so. My apologies in advance.) At some point, I may upgrade to Ubuntu 20.04, but the vast majority of research code I use these days is still tied to Ubuntu 18.04. I do use a Macbook Pro laptop, but for work contexts, that is mainly for making presentations and possibly writing papers on Overleaf. If I do “research programming” on my laptop, it is done through ssh-ing to an Ubuntu 18.04 machine.

Starting in 2019, I began using conda environments. Previously, I was using virtualenvs coupled with virtualenvwrapper to make handling multiple environments easier, but it turned out to be a huge hassle to manage with various “command not found” errors and warnings. Furthermore, I was running into countless issues with CUDA and TensorFlow incompatibilities, and inspired by this October 2018 Medium article, which amusingly says that if using “pip install” commands for TensorFlow, “There is a probability of 1% that this process will go right for you!”, I switched to conda environments.

Conda environments work in basically the same way as virtualenvs in that they isolate a set of Python packages independent of the system Python. Here, “conda install” plays the role of “pip install”. Not all packages installable with pip are available through conda, but that’s not a huge issue because you can also run normal pip install commands in a conda environment. The process might be delicate, though (see this for a warning) but I can’t remember if I have ever experienced issues with mixing conda and pip packages.

Here’s how I get the process started on new machines:

I use miniconda instead of anaconda, but that’s mainly because I prefer something more lightweight to make the process faster and take less disk space. Furthermore, anaconda comes with packages that I would normally want to install myself anyway later (such as numpy) so that I can easily control versions and dependencies.

To be clear, here’s what I do when I run conda envs after that bash command. I accept the license: 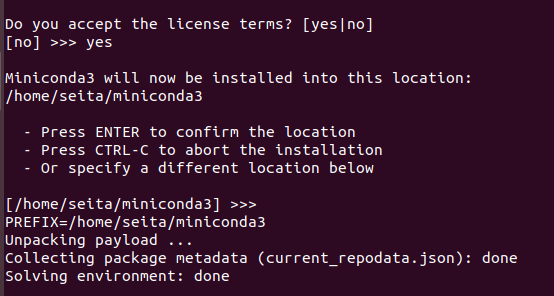 I always use the default location (click enter) which is typically /home/<USER>/miniconda3. Then after that I will see:

I typically say “yes” so that miniconda automatically adds stuff to my .bashrc file. After this, I can run the “conda” command right away, but I also don’t want the “base” environment to be active right away because I would rather have each new command line window start with a blank non-conda environment. Thus, after closing and re-opening the shell (typically via exiting the machine and ssh-ing again) I do:

This information goes into the ~/.condarc file. After refreshing with . ~/.bashrc, conda is all set up for me to use. Here are a few commands that I regularly use:

We now turn to discussing how conda environments work with TensorFlow and PyTorch.

Migrating to TensorFlow was the original motivation for me to use conda environments due to running into incompatible CUDA/CuDNN versions with “pip install tensorflow” commands on various machines. You can find a table of TensorFlow packages and their associated CUDA and CuDNN versions here and a popular StackOverflow post here.

As of today, the latest version of TensorFlow is 2.6.0 through pip, but it’s 2.4.1 through conda. A different set of maintainers package the conda TensorFlow version as compared to the one provided through the Python Package Index (PyPI) which is from the official TensorFlow developers, which is why there is some version lag (see this post for some context). Since it’s rare that I absolutely require the latest TensorFlow version, I focus on TensorFlow 2.4.1 here. I run the following commands to quickly start a Python 3.7 conda environment with TensorFlow 2.4.1 installed:

Similar Python versions will likely work as well. These days, I use Python 3.6 at a minimum. Also, I just put in ipython since I like running it over the default Python shell. Once I run ipython on the command line, I can try:

The tf.test.is_gpu_available() method is deprecated, so use tf.config.list_physical_devices('GPU') instead. Presumably, this should give information that is consistent with what happens when running nvidia-smi on the command line; the first one should list all GPUs and the second one should return True. If not, something went wrong.

Hopefully that helps clarify one way to install TensorFlow in conda environments for shared machines. One day I hope that TensorFlow will be simpler to install. To be clear, it’s simple but could be made a little easier as judged by the community’s reception. (To put things in perspective, remember how hard it was to install CAFFE back in 2014-2015? Heh.) In new “clean” machines where one can easily control which CUDA/CuDNN versions are packaged on a machine on the fly, such as those created from Google Cloud Platform, the pip version could be relatively easy to install.

What about PyTorch? For PyTorch, the process for installing is even easier because I believe that the PyTorch maintainers simultaneously maintain conda and pip packages, because we have the option of selecting either one on the official installation page:

As with my TensorFlow tests, I can test PyTorch installation via:

As of today, this will install PyTorch 1.9.0 along with ipython. Again, ipython is not necessary but I like including it. You can then check if PyTorch is using the GPU(s) as follows:

Here is the StackOverflow reference. As with my TensorFlow test, this method of installing PyTorch will detect the GPUs and does not rely on the system’s existing CUDA version because the conda installation will provide it for us. For Pytorch, the cudatoolkit-10.2.89 package (which is 365.1 MB) gets installed, which you can check with cuda list. Once again, this also includes CuDNN.

In academic research labs, students often share machines. It thus helps to have a scalable, efficient, and manageable way to store data. Here’s how I typically do this for machines that I administer, where I am a “sudo” user and grant access to the machine to other lab members who may or may not be sudo (for example, I rarely make new undergrad researchers sudo unless there’s a good reason). I assume that the machine is equipped with a separate SSD and HDD. The SSD is typically where users store their local data, and because it’s an SSD rather than an HDD, reading and writing data is faster. The HDD is mainly for storing larger datasets, and typically has much more storage than the SSD.

For a clean machine, one of the most basic first steps is to make sure that the SSD and HDD are mounted upon startup, and accessible to all users. Usually, the SSD is automatically mounted, but the HDD might not be. I can mount these drives automatically by editing the /etc/fstab file, or by using the “disks” program, which will end up editing /etc/fstab for me. I suggest following the top answer to this AskUbuntu question. My convention is to mount the HDD under a directory named /data.

To inspect file systems, I use df -h, where the -h argument makes the sizes human-readable. Here’s an example of a subset of the output when I run df -h:

According to the above, the SSD has 1.9T of total space (of which 67 percent is used), and the HDD has 13T of total space. The output of df -h includes a bunch of other lines with information that I’m not sure how to interpret; I am guessing those correspond to other minor “drives” that are needed for Ubuntu systems to function. I only use df -h to look at the SSD and HDD, to make sure they are actually there, and to check disk space.

Incidentally, another way I check disk space is by using du -sh <directory>, which will list space recursively stored under <directory>. Depending on user privileges, the command might result in a lot of distracting “permission denied” warnings, in which case I add 2> /dev/null at the end of the command to suppress those messages. I recommend reading this article for more information and useful tips on managing disk space.

After mounting the HDD, it is typically under control of root for both the user and the group, which you can check with ls -h /. This is problematic if I want any user to be able to read and write to this directory. To resolve this, I usually follow the top answer to this AskUbuntu question. I typically make a new group called datausers, and then add all users to the group. I then change the ownership of the shared folder, /data. Lastly, I choose this option:

According to the AskUbuntu question, this means that all users in datausers can add to /data, and can read but not write to each others files. Furthermore, only owners of files can delete them, and users outside of datausers will be able to see the files but not change them.

As with df -h, I am only showing part of the output of the above command, just the line that lists data. This shows that it is correctly under the group “datausers.”

Finally, I reboot the machine, and then now users who are in the datausers group should be able to read and write to the /data without sudo access. Furthermore, unless sudo privileges are involved, users cannot modify data from other users in /data.

Using conda environments has been a huge help for my research workflow, and makes it easy to manage multiple Python projects. I have also been fortunate to get a better sense for how to effectively manage a finite amount of disk space among multiple users.

Some stuff that I also use in my current workflow, and would like to write more about in the future, include VSCode, vim, the Python debugger, Docker, and ssh keys. I also would like to understand how packages work for C++, to see how the process contrasts with Python packages.