In this post, I will further investigate one of the papers I discussed in an earlier blog post: Zero-Shot Visual Imitation (Pathak et al., 2018).

For notation, I denote states and actions at some time step \(t\) as \(s_t\) and \(a_t\), respectively, if they were obtained through the agent exploring in the environment. A hat symbol, \(\hat{s}_t\) or \(\hat{a}_t\), refers to a prediction made from some machine learning model.

As I discussed earlier, there are a number of issues related to this basic forward/inverse model design, most notably about (a) the high dimensionality of the states, and (b) the multi-modality of the action space. To be clear on (b), there may be many (or no) action(s) that let the agent go from \(s_t\) to \(s_g\), and the number of possibilities increases with a longer time horizon, if \(s_g\) is many states in the future.

Let’s understand how the model proposed in Zero-Shot Visual Imitation mitigates (b). Their inverse model takes in \(s_g\) as an arbitrary checkpoint/goal state and must output a sequence of actions that allows the agent to arrive at \(s_g\). To simplify the discussion, let’s suppose we’re only interested in predicting one step in the future, so \(s_g = s_{t+1}\). Their predictive physics design is shown below.

The basic one-step model, assuming that our inverse model just needs to predict one action. The convolutional layers for the inverse model use the same tied network convolutional weights. The action loss is the cross-entropy loss (assuming discrete actions), and is not written in detail due to cumbersome notation.

The main novelty here is that our predicted action \(\hat{a}_t\) from the inverse model is provided as input to the forward model, along with the current state \(s_t\). We then try and obtain \(s_{t+1}\), the actual state that was encountered during the agent’s exploration. This loss \(\mathcal{L}(s_{t+1}, \hat{s}_{t+1})\) is the standard Euclidean distance and is added with the action prediction loss \(\mathcal{L}(a_t,\hat{a}_t)\) which is the usual cross-entropy (for discrete actions).

Why is this extra loss function from the successor states used? It’s because we mostly don’t care which action we took, so long as it leads to the desired next state. Thus, we really want \(\hat{s}_{t+1} \approx s_{t+1}\).

Now how do we extend this for multi-step trajectories? The solution is simple: make the inverse model a recurrent neural network. That’s it. The model still predicts \(\hat{a}_t\) and we use the same loss function (summing across time steps) and the same forward model. For the RNN, the convolutional layers \(\phi\) take in the current state but they always take in \(s_g\), the goal state. They also take in \(h_{i-1}\) and \(a_{i-1}\) the previous hidden unit and the previous action (not the predicted action, that would be a bit silly when we have ground truth). 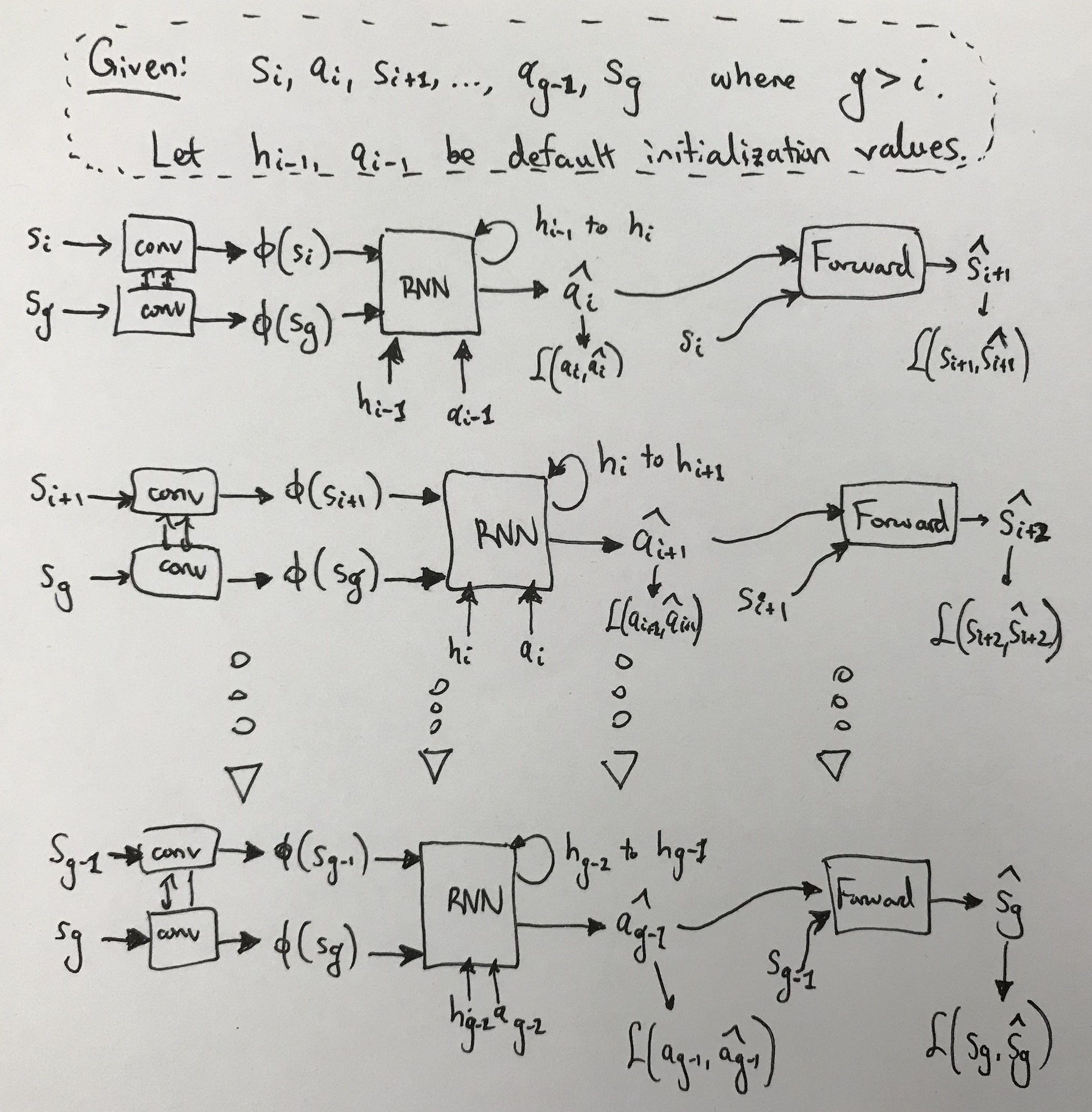 The multi-step trajectory case, visualizing several steps out of many.

Fortunately, the authors answer that last thought by training a deep neural network that can learn a stopping criterion. They say:

We sample states at random, and for every sampled state make positives of its temporal neighbors, and make negatives of the remaining states more distant than a certain margin. We optimize our goal classifier by cross-entropy loss.

So, states “close” to each other are positive samples, whereas “father” samples are negative. Sure, that makes sense. By distance I assume simple Euclidean distance on raw pixels? I’m generally skeptical of Euclidean distance but it might be necessary if the forward model also optimizes the same objective. I also assume this is applied after each time step, testing whether \(s_i\) at time \(i\) has reached \(s_g\). Thus, it is not known ahead of time how many actions the RNN must be able to predict before the goal is reset.

An alternative is mentioned about treating stopping as an action. There’s some resemblance to this and DDO’s option termination criterion.

The independent goal recognition network does not require any extra work concerning data or supervision. The data used to train the goal recognition network is the same as the data used to train the PSF. The only prior we are assuming is that nearby states to the randomly selected states are positive and far away are negative which is not domain specific. This prior provides supervision for obtaining positive and negative data points for training the goal classifier. Note that, no human supervision or any particular form of data is required in this self-supervised process.

Now let’s discuss the experiments. The authors test several ablations of their model:

Thus, all three of their ablations do not use the forward consistency model and are solely trained by minimizing \(\mathcal{L}(a_t,\hat{a}_t)\). I suppose this is reasonable, and to be fair, testing these out in physical trials takes a while. (Training should be less cumbersome because data collection is the bottleneck. Once they have data, they can train all of their ablations quickly.) Finally, note that all these inverse models take \((s_t,s_g)\) as input, and \(s_g\) is not necessarily \(s_{t+1}\). This, I remember from the greedy planner in (Agrawal et al., 2016).

The experiments are: navigating a short mobile robot throughout rooms and performing rope manipulation with the same setup from (Nair et al., 2017).

Despite the lack of detail in some areas of the paper, (where’s the appendix?!?) I certainly enjoyed reading it and would like to try out some of this stuff.